If you want to find a character barely anyone knows (or cares about) in the Castlevania lineage, you need look no further than Desmond. Created for the mobile-only game Castlevania: Order of Shadows, Desmond's game was built, from the ground up, specifically for mobile phones. Sadly, what the makers didn't do was build a very good game, so no one payed attention to it.

It's hard to say this was a sad turn of events, as the game was essentially a side-story to the whole sage with little impact on the story or the characters moving forward. It did tie into Lament of Innocence some, referencing items and locations from that game (such as the opening area, Forest of Eternal Night). Still, whether you played Order of Shadows or not, there was little here to illuminate your understanding or appreciation of the Castlevania series as a whole. And thus, Desmond faded into obscurity.

No, really. We went out of our way to research him and see what information might be out there about the character that we missed. Barely any of the fan sites have anything on him, and most of it amounts to two sentences stating "Desmond was from this game. He used a whip."

Sorry, Desmond, but no one seems to care about you. 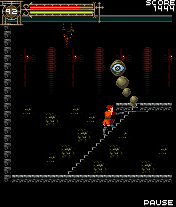 Trained from a young age to wield the Vampire Killer, Desmond was the eldest, male child of his generation (he did have two younger sisters). He never expected to fight Dracula as the vampire wasn't expected to rise once more for close to thirty years. Unfortunately, a group of Dracula's followers, the Order, lead by Lord Rohan Krause, had other plans. They resurrected Dracula's castle, the home and source of his power, and planned to bring back the dark master. It was up to Desmond to venture into the castle and stop the Dark Lord's resurrection.

Armed with the family whip, as well as Leon Belmont's magical gunatlet of alchemy, Desmond worked his way through the castle, from the Forest of Eternal Night through the dungeon and towers, Desmond fought the minions of Dracula, including Medusa and Death. His eventually fought his way to the final rooms where he confronted Krause. Killing the evil Lord, thought, did not prevent the Dark Lord's resurrection; the spilled blood only ensured it. This forced Desmond to slay the evil vampire and force him back into his grave.

Darkness (temporarily) defeated, Desmond watched the castle crumble before returning home with his siblings, safe in the knowledge that Romania was, at least temporarily, saved from Dracula's darkness.

While no one really remembers or cares about the game (including Konami, really, as Order of Shadows isn't part of the official timeline of the series), we do have to give credit to the fact that its makers were able to cram the modern-style of Metroidvania play into a mobile game. Previous attempts at making a mobile Castlevania game usually involved converting an older title to the mobile platform (which normally left the resultant game rather compromised). Here, though, the game was built entirely for mobile devices and, for all it's flaws, it did at least play like a proper Castlevania.

The game might not have been very good, and way too short, and certainly not challenging enough, but just being able to deliver on the promise of "Metroidvania on your phone" is quite the acomplishment.

It's worth noting that originally Desmond wasn't intended to be a Belmont, but a random sword-and-axe wielding hero. His story was re-written part way into development. The character was redesigned into a Belmont once the changes had been made to the plot. His final design was thought of as a combination of Simon and Richter, just younger (supposedly fans asked for the Belmont to be aged down, although we can't find much in the way of references to back this tidbit up).

Like other heroes of the Metroidvania-era, Desmond had a whole (if small) castle to freely explore. He could do this with the aid of his whip, various sub-weapons, and some other items that would aid his exploration. For the most part, though, he was a pretty bog-standard Belmont -- not special but not terrible, either.