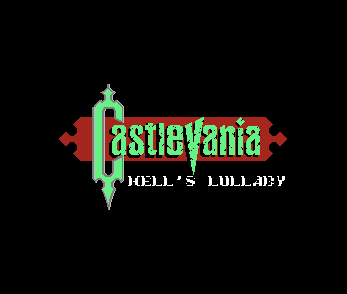 Plenty of fans have wished for Konami to make a return to the games they used to make, whether the classic platformers of the NES and SNES era or something more Metroidvania styled. The desire is for Konami to stop messing around with gambling machines and the Lords of Shadow series and go back to ding what they were good at. It's doubtful the company ever will (they seem more more interesting in milking a quick few bucks out of re-releases and mobile games over anything else), so that leaves it to the fans to try and do their part to keep the series alive.

In the case of developer Simsure, that meant crafting a sequel to one of the classics of the series, Castlevania III: Dracula's Curse, creating an adventure that played much like the classic platformers of old. For the most part they manage to recapture a bit of that magic, creating a game that feels pretty good and certainly has the right ambiance. It's obviously a fan-game, not something that would be mistaken for Konami when the company is firing on all cylinders, but considering the other games Konami has promised and finished in recent years (that would be zero games, mind you), it's nice to have anything that feels even remotely like a proper Castlevania game.

Taking place years after Castlevania III, Hell's Lullaby finds series hero Trevor Belmont heading to Castle Dracula alongside is son, new character Evan Belmont (along with a potential secret character once the players unlock them), when the evil edifice appears on the hills above the Borgo Pass. The heroes then have to run, jump, and whip their way through the horde of the damned all so they can take on Dracula and save the lands of Romania once again. You know, the usual story we're come to expect from the series.

When you first boot it up, Castlevania: Hell's Lullaby reveals a couple of its interesting quirks that give the game a bit more depth over the bog-standard Castlevania title. For starters the game does have two main, playable characters: the slower and stronger Trevor juxtaposed against the weaker but faster Evan. Players can take either of these heroes into combat in the single player game, or they can pair up and play the game in local multi-player. It's a nice addition that speaks to a similar mode included in Bloodstained: Curse of the Moon 2, and one can only hope more games in the series (official or fan-made) add this mode in. 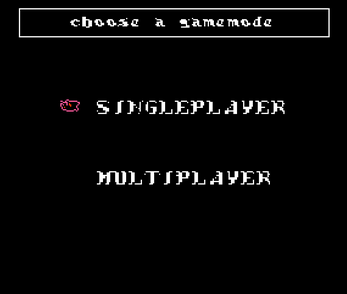 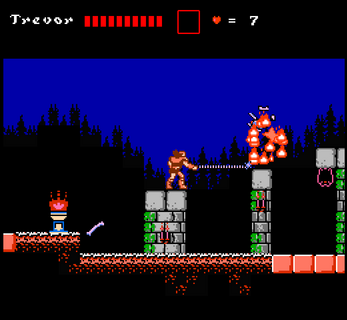 Depending on which characters you pick this game is either going to be very easy or very hard. Trevor, the obvious choice for fans of the classic games, is slower than Evan and he doesn't have nearly the jump height. That said he's also much stronger and more able to handle the waves of enemies that come at you. Despite his speed he's actually the easier way to play the game. Meanwhile Evan is like this game's Luigi, fast and lithe with much a much higher jump ability but he only deals have the weapon damage of his father. Evan is hard mode and you'll easily spend twice as long playing through the game as this character as you would Trevor.

That's not to say this game is difficult as either character, just that Evan makes it game take longer as you have to be more strategic with this character. In general the game is actually very fair without the standard mobs of enemies or "kaizo" level layout you'd expect from fan-made games. Sure, there are some moments when more than a few enemies are on screen at once but, in general, these moments are easy to handle, manging these packs with a solid strategy and a bit of quick wit (especially if you play as Trevor).

One nice touch which helps to control the difficulty is the fact that enemies don't re-spawn. This might seem like blasphemy if you're used to the classic game, but I actually really liked this. I could kill enemies and then double-back or items drops without worrying about having to manage a pack again. That said, if you fail to kill an enemy they don't just go away and will sometimes chase you (or continue firing at you) long after you've left their screen.

The game has six lengthy stages, putting it closer in line to the original Castlevania than Castlevania III. It's also worth mentioning that despite the game being set after that third main-line entry it doesn't really feel like a proper sequel to that game. There are no branching paths, no switching characters to use their different abilities, and none of the flourishes you'd expect from that game. This is spiritual sequel to the originating game in the series dressed up with some graphics and music from later in the series. 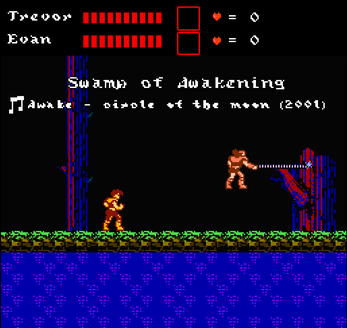 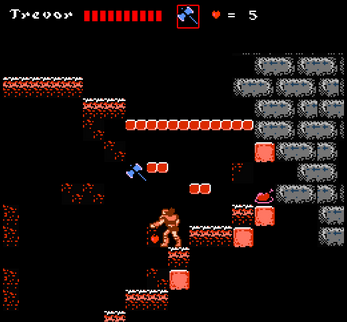 Personally I didn't mind this at all. Better that the creator focused on a making a solid, if short, game than letting his ambitions get the best of him, losing track of the core game play and crafting something less playable. This game was very fun, and while short it sill managed to convey the classic NES experience in a solid, enjoyable form. Maybe it lacks a little of the polish we'd expect from Konami, but for a one-person development team it gets about as close as you'd expect while still also delivering the goods.

There are dozens and dozens of Castlevania fan-games out there (and that doesn't even count rom-hacks, which pushes that total up to the hundreds, maybe the thousands) so finding a playable game in all of that can be difficult. Hell's Lullaby stands out from that mess as a well-designed, competently coded, fun-to-play title. Any imperfections can be forgiven because it's a home-brew and released for free. It's hard to argue with free, especially when it's made this well.