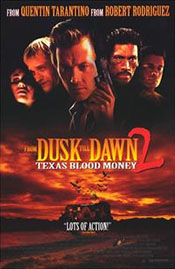 When crafting a sequel, the creators are presented with a few different options: you can make a sequel to the main characters and follow their adventures (even if, thematically, the movie is barely tied to the original flick), you can spin off side-characters (so as to follow up related adventures in the world created by the first movie), or you can make a thematic sequel (where none of the recognizable characters show up, but the premise of the first movie is repeated). The first From Dusk Till Dawn introduced us to two criminals, the Gecko brothers, and their hostages, all stuck in vampire central, fighting for their lives. Instead of following the survivors (probably because George Clooney wasn't interested, or would have asked for too much money), we get a new band of criminals dealing with vampires from the evil vampire bar, the Titty Twister.

Buck (Robert Patrick) is an ex-con living the simple life in his trailer. Buck's ex-partner, Luther (Duane Whitaker), has escaped from the law and is on the loose, and the two of them are hatching a plan to steal a lot of money from a bank in Mexico (thankfully, one that has a stash of U.S. dollars, as pesos aren't worth much), and all they have to contend with is a Sheriff from north of the border, Sheriff Lawson (Bo Hopkins). Well, that and some vampires. Luther hits a vampire bat on his way to the meet-up location, and the bat stalls out his jeep. So Luther heads to a near-by bar (the Titty Twister), gets a lift from the vampire bartender (Danny Trejo, who died in the first flick, but Trejo is in every Rodriguez-produced movie, so this isn't anything surprising), and the vampire ends up eating/turning Luther.

And so, vampire-Luther goes to the meet-up to kill/convert the rest of the gang (all the guys Buck brought with him), and steal a bunch of money. It's up the Buck to try to make it out alive, past all the cops and the recently-turned vampires.

The original From Dusk Till Dawn was a fun, silly affair. It started off as a great gangster movie (powered mostly by George Clooney's performance), and then added in vampires near the end because why not, right? It was supposed to be a vampire movie, but it was done by guys that knew gangster-style flicks (Tarantino) and wild, overblown action (Rodriguez). So they took the best elements that they could work with, and then tried to stitch vampires on top. It was messy, but the surprise was in how well it worked. Unfortunately, a gangster movie that turns into a vampire flick is a premise that really only works once -- the shock is greatly diminished upon repeat visits to the well. What Texas Blood Money tries to do is make a thematic sequel to the first movie, only without any of the big-name actors, writers, directors, or the big twist half-way in. 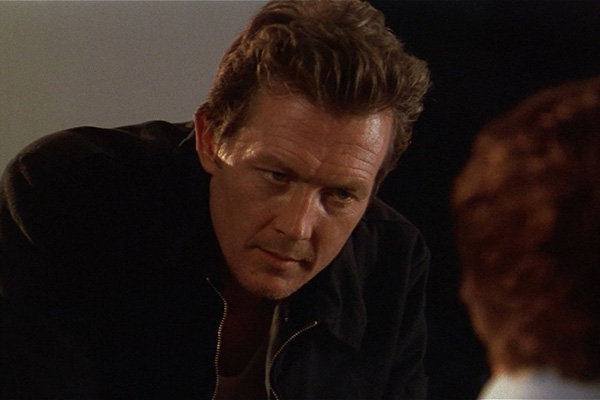 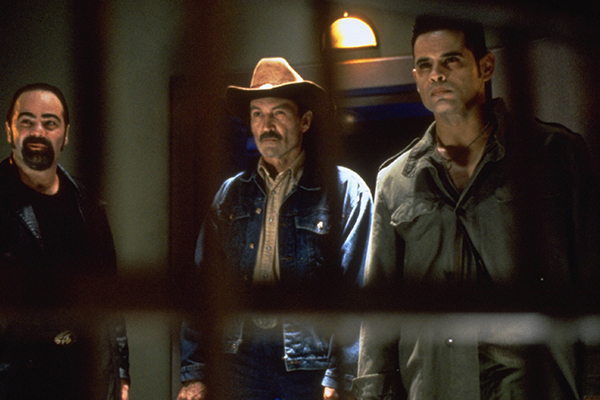 Much as I might like Robert Patrick (forever the T-1000 for most people), he just doesn't have the on-screen charisma of Clooney. Maybe it's the character he's stuck playing, a criminal good-old-boy, down on his luck and looking for a quick score -- there's nothing really likable about Buck, which means we aren't rooting for him, and his plight against the hordes of the undead rings hollow for the audience. Of course, if more time was spent building up his character, maybe we would have liked him more, but the script gives him a minimal enough intro (spending more time introducing a fake film at the start of the movie than actually introducing Buck) before Buck is on his way to get the gang together and get to Mexico.

Most egregiously is that the rest of the characters are more interesting than Buck, but all of them quickly become one-note as they get turned to vampires. Time is spent giving each of the other members of the gang a little back-story so you care, and Luther is given plenty of screen time to grow into his role (and, honestly, I rather liked Luther right up til the point where he became a vampire), but the vampires in the series (not just this movie specifically) are all brainless bat-creatures out to drink blood and do evil. Once the side-characters become vampires they stop being characters at all, just monsters the "hero" will have to kill off. You don't spend enough time with them beforehand to really care (although, again, I liked Luther well enough and wished they'd spent longer with him before he turned), and then they aren't interesting afterwards, so why bother caring that they're all going to die?

But then, another issue with the vampires is that they are all just silly looking. Much as in the first flick, the vampires are uninteresting to look at, with makeup that's more humorous than scary. The movie is obviously trying to keep the vampire effects silly (especially with the number of CGI and rubber bats thrown around, flying completely unrealistically) but you can't have it bother ways -- you can't try to make a serious gangster/vampire mash-up and then also make the vampires more comical than scary.

And, just for the record, can we please stop with the heroes picking up two sticks of wood and using that to make a cross? It's not blessed, and it's not made of special wood, so why should a vampire care? The first movie did this as well, and it bothered me both times. 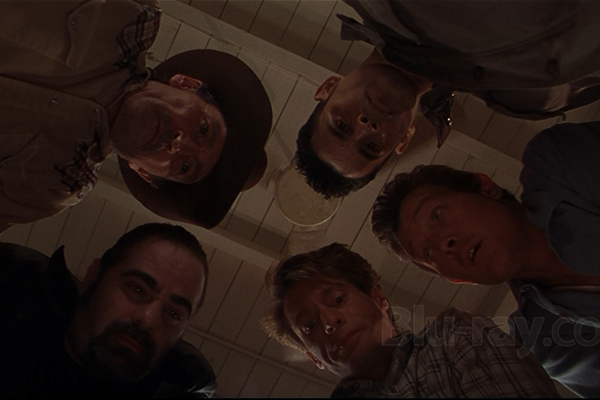 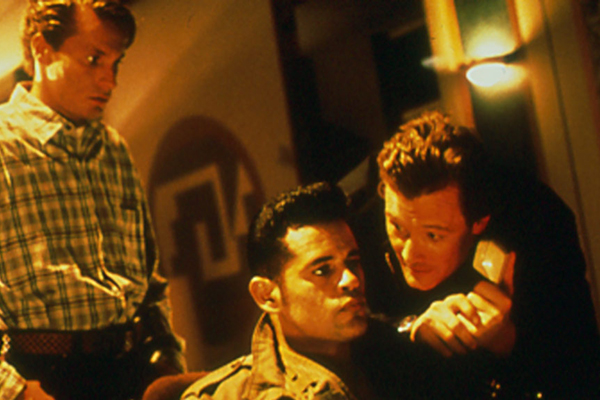 One person I can credit, though, is the cinematographer, Philip Lee. While the rest of the movie tries, and fails, to ape the first flick, the cinematography was inventive, interesting, and a treat to watch. Lee obviously wanted to do something interesting with the camera work, and wasn't afraid to get experimental. Tracking shots, interesting zooms, oddly mounted cameras (like on top of an oscillating fan) give the film a dynamic feel that the rest of the production isn't able to match.

Texas Blood Money isn't the worst vampire movie I've ever seen, nor is it the worst gangster/caper flick I've ever seen. It's not very good, and hopefully I won't have to watch it again (I've already sat through it twice so far, both times so I could review it for this site), and in no way do I recommend it to anyone -- vampire fan or not. Save yourself the trouble and watch something else.