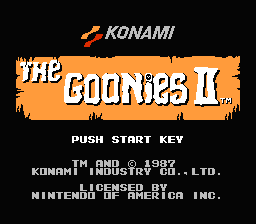 The original Famicom game for The Goonies never officially made its way over to the United States. This is a detail that seems pretty strange when you think about it because, really, was there a huge market for the original 1985 movie in Japan? What kind crossover was there between Japanese gaming enthusiasts and fans of Richard Donner's "kids on an adventure" comedy? It seems like the right market for the game would have been the U.S., but the first time just wasn't the charm for the series.

However, a year later Konami put out an improved title, The Goonies II (titled Gūnīzu Tsū: Furatteri Saigo no Chosen in Japan, translated as "The Goonies II: The Fratellis' Last Stand"), that took everything about the first game and greatly expanded it. Then they released the game worldwide... and everyone outside of Japan promptly thought the game was a direct sequel to the movie. This is what happens when the first game never comes out, Konami. But whether you thought it was a sequel to a previous game or a movie, there's no doubting the ambitions of Konami's second video game adaptation of The Goonies.

Where the original title was a puzzle-platformer with some minimal Metroidvania aspirations, the sequel goes all in on the adventure elements, investing wholly in the exploration genre. Arguably it goes further than just about any other game of the era, crafting a large and twisty world for the hero (Mikey this time, replacing Sloth from the original) to explore, with plenty of items to collect and all kinds of secrets to find. This is a Metroidvania title that, for the time it was released, certainly pushed all the conventions and redefined the burgeoning genre.

Like with the first game, our hero finds themselves at the Fratelli hideout, having to rescue his friends (and, for some reason, a mermaid) from the clutches of the evil Italians. To save the day, Mikey will have to explore the large, interconnected hideout, bouncing between front and back halves of the dungeon (just like in the first game), while looking for all the hidden collectibles they'll need to get ever deeper into the adventure. Progress deep enough and you'll find the missing mermaid, Annie, and save the day once again. 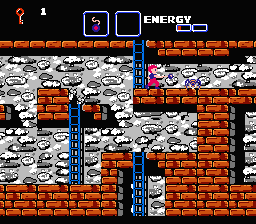 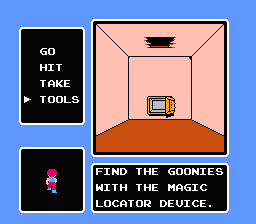 This games makes some changes from the original title that help to not only differentiate it from the previous affair but also deepen the play experience. Where in the original game the various collectibles were beneficial but not required -- need to get through a fiery section, collect a fire suit and you're immune, but you can skip it and just learn patterns and be lucky -- here all the collectibles are required. You can't reach higher areas without the spring shoes, you can't go into water without the diving suit. Everything is essential to beating the game.

Many of the items you collect aren't used in the main, platforming section of the game but inside the transitions areas between the front and back halves of the dungeon. This is the second big change the game makes -- in the original title you just naturally moved from front to back (and vice versa), but here the game implements an text-adventure-esque exploration mode in these halls. You'll move from room too room, looking for collectibles and using the items you find (like a hammer, glasses, and a ladder) to open new rooms and unlock all the secrets. These sections are mandatory if you're going to figure out the path through the maze like hideout and, ultimately, save the fish-girl at the end of the game.

The biggest knock I have against the game is just how large and twisty the hideout really is. The game comes with a map (in a move that just about every future Metroidvania would copy, but even with a map in hand you'll probably have to make your own maps and take a ton of notes because this whole dungeon is incredibly convoluted and overly-complex. Even with a walk-through assisting me at times, I still frequently got lost. I can't imagine how kids back in 1987 found their way through the game.

The game is also incredibly cheap at times. Enemies will spawn in at inconvenient locations, and they'll camp right where you need to go, purposefully causing damage avoidably. Thankfully the game doesn't have any kind of knock-back damage, but as the enemies grow in strength, these forced moments of damage can really pile up. You only have so many lives, and even with health expansions (from saving the other kids locked away in the game), you will still frequently find yourself staring at the Game Over screen. 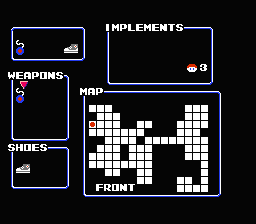 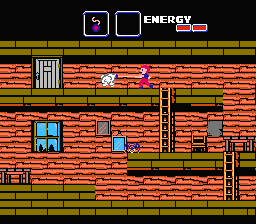 Weirdly, I found myself actually enjoying the first game more than this sequel. For all its innovations, the game gets pretty darn obtuse about where to go and what to do. The first game might have been simpler but it was also more direct and navigable. Easier, maybe, but only in that you could actually figure out where to go and what to do and, once you were done with an area you didn't have to cross it again and again to get to the next zone you needed. Goonies II expects you to keep the entire world mapped in your head, and that's damn hard to do with this game.

That said, I can understand why this game has its supporters. It is a creatively designed game that really pushed the boundaries of the exploration-platforming genre (before it even had the name of "Metroidvania"). It may be unforgiving but it's also imaginative and creative, testing players but rewarding them for teasing out its secrets. Six-year-old me would have been frustrated with the game back in the day, but adult-me at least can respect what the game was going for and see why people might enjoy this title even now.

As this game was designed by Konami (as with its predecessor), this marks another entry in the company's experiments with the Metroidvania genre. Back in the day, Konami arguably did more for the genre than any other company (even Nintendo). But even though it bears the name "The Goonies", this game does have some shared DNA with the series of adventures the Belmonts were having at the time.

Mikey's yo-yo, his starting weapon, feels a lot like a whip. It's a basic weapon (and Mikey will get other sub-weapons, another shared commonality between games) but effective. It's the armament you'll end up using most often, and between it's decent attack speed and range, it makes for a good main attack in the game, just like the Belmont's prized whip. 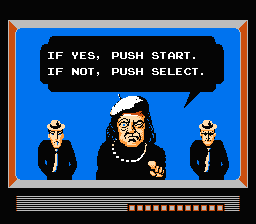 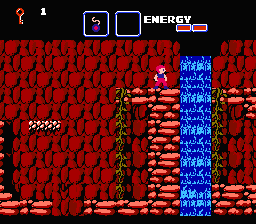 It's what The Goonies II adds to the genre that really shows its influence. The map in game, comprised of connected squares to represent the screens of the game, feels a lot like the maps that later Castlevania games would use. Even the use of a "Front" and "Back" for the maps feels like a precursor to the latter Belmont adventures, most specifically Harmony of Dissonance with its interconnected Castles A and B. This was a first draft here on the NES that would be improved with the later Castlevania adventure, but it's effective in design even here.

After this, The Goonies would only have one more bit of connective DNA with the series: Mikey's inclusion in the crossover title Konami Wai Wai World. Konami would let their license to the movie lapse once that 1988 Famicom game came out, and Mikey would disappear from re-releases of the game, but for a brief, three-year stint, the Goonies had their place in Konami canon, featuring in three very interesting proto-Metroidvania titles that helped to define the genre.