Back in the day, NES games were known for being difficult. Even now, when difficult games are discussed, they're often classified into "hard" and "Nintendo hard" (especially if we're talking about a retro game getting back to it's "difficult" roots). But even in that realm, with all the various games that were "Nintendo hard", Ninja Gaiden stood apart. It wasn't just hard, it was Ninja Gaiden hard.

Taking on the role of Ryu Haybusa, players move this nimble ninja through six stages of (quickly) increasing difficulty, from the mean streets of America to a high mountain fortress, all so they can take on a demon and gain vengeance against the demon's cult that kill Ryu's father. Armed with his katana, fancy moves, and a number of additional weapons he can collect, Ryu has to dodge, duck, and fight is way to the end (and avoid all the damn birds that stand in his way). 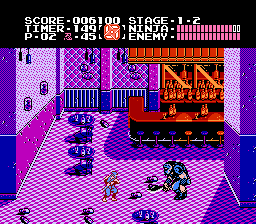 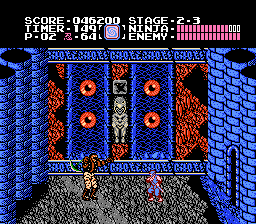 If you're even played Ninja Gaiden (titled Ninja Ryu Ken-den in Japan, translated as "Legend of the Ninja Dragon Sword") before you know exactly how hard that feat can be. While Ryu is a marvel of control, with his fast, floaty jumps and strong forward attack, in addition to his ability to attach to vertical surfaces so you can wall kick and bounce around stages, those levels are designed to frustrate players at every turn. Tiny platforms will hang out over huge chasms with enemies mobbing in from each direction. And the bird, oh the damn birds, which will appear at the edges of the screens and fly in with homing precision, knocking you back (and likely into a pita) over and over again.

And then, of course, there's the last stage where a game over anywhere in the stage sends you all the way back to the very beginning of the level (no matter how many checkpoints you've passed). It's a gauntlet of difficulty, and maze of danger and anger. But getting through the whole game to see the ending cut-scenes feels that much sweeter because of how hard the game was.

In some ways, Ninja Gaiden doesn't feel like a natural comparison with Castlevania. On the surface there's little similar with Ryu and any of the Belmont heroes. Certainly, from a movement perspective, Ryu seems faster, more lithe than any of the Belmonts.

When it comes to his armory, though, Ryu does feel like an answer to heroes of Castlevania. His special weapons (sub-weapons) grant Ryu projectile attacks (such as a shuriken that zooms back and forth across the screen, almost like the holy cross in Castlevania), but he has to watch out since he can only carry one at a time and has limited ammo to do so (just like a Belmont).

There's also his wall-cling ability, which may have directly influenced the abilities of Grant DaNasty in Castlevania III (although only Konami could confirm that). Certainly, when look at side to side, Grant is quicker on his feet with that handy ability to stick to surfaces, comparing nicely to Ryu. Heck, Grant can walk along surfaces, something Ryu would only be able to gain (in limited instances) in his later games. 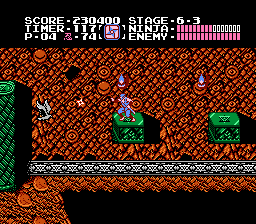 And then there's the general ambiance of the game (beyond just the jerk birds that seem to be in every NES game, not just Castlevania. Once you get past the initial stage set in a city street, the game starts to get more Gothic in its attitude. Ryu wades through forests scales mountains, fighting demons and devils along the way. Swap in a Belmont for any of these stages and they'd feel of-a-piece with Castlevania. While sure, the argument could be made that many NES games featured forest and mountain scenes, the details of the fortresses with their ruined facades, combined with the large demon bosses, certainly feels like Castlevania at times.

Plus, let's be honest, if any other series helped to exemplify "Nintendo hard", it would be Castlevania. It only makes sense that another series playing with similar themes would be as hard (if not harder).

While it may be possible Tecmo didn't intend to make a Castlevania clone, they certain managed to do so in some very subtle ways. At the very least the two game series each compare well to the other, showing similar ideas filtered through the mind of different game companies.