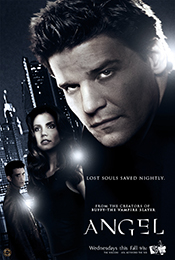 Spinning out from the 1997 Buffy the Vampire Slayer, Angel follows the adventures of Buffy's one-time love interest, Angel (thus the name of the show). A vampire with a soul (who sometimes loses his soul, then gets it back, then feels remorse about all the things he did while he didn't have a soul), Angel has a lot of make up for, so he travels to L.A. to "help the helpless" (his words) and fight the good fight for the forces of light (represented eventually in the series by "The Powers That Be"). In his quest he's aided by Cordelia Chase, one-time mean girl back in Sunnydale, CA, and Wesley Windham Price, a one-time watch turned rogue demon hunter.

Standing against our heroes is a set of lawyers for Woflram and Hart, evil creature (literally) who represent the worst demonic scum of the planet (also literal). Time and again Angel will have to find out what Wolfram and Hart have planned for this dimension and work to stop it before the eventual apocalypse occurs.

Angel is a different show from Buffy, a fact that might have turned off some people when they came over to watch this show. While both shows are concerned with heroes fighting against demons, vampires, and the forces of darkness, Angel could be said the be the more mature show dealing with characters that felt like adults not college students or people still learning who they want to be. Angel, of course, is a centuries-old vampire who long ago grew up and he sets the tone for the show, not that the other characters weren't grown up in their own way. Of the rest of the cast (most of whom were new to the series once we got past Wesley and Cordelia), only Cordelia was still a college-age character and even she quickly became an "adult" in the face of bills, monsters, and lawyers. It's a show for a different demographic than Buffy one that dealt with different issues and had different kinds of villains.

In many ways the show wasn't as funny as Buffy, either. Oh, it still had funny moments, but the darker sections got much darker and there were many episodes (especially in later seasons) that were downright glum. Compared against its parent series, Angel was definitely more serious. That played to its advantage, though, showing us situations that would never have shown up in Buffy (well, except for an episode when she ran away and came to L.A. -- it must be something about that city). Angel knew the kinds of stories it wanted to tell and they weren't Buffy stories. 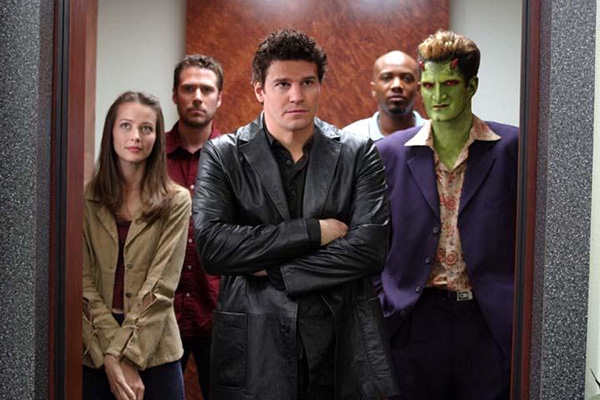 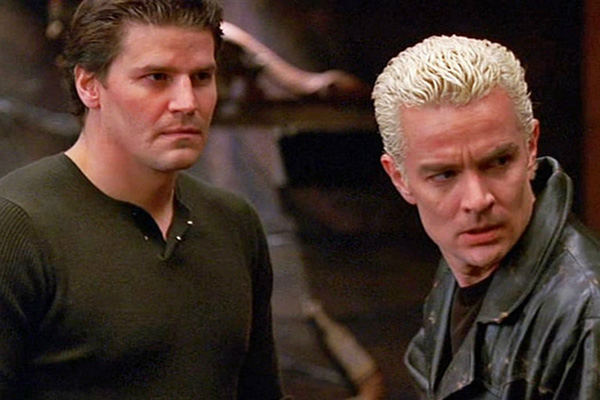 The cast, thankfully, rose the challenge. Angel, played by David Boreanaz, was a pretty one-note character on Buffy, mostly moping around when not being evil. Here, though, he got to have more to do; because the camera was largely focused on our titular vampire, Angel had to develop layers, he had to become a fully realized character that had lighter moments and character depth. Although I haven't liked Boreanaz in much else (most of the time it feels like he's just playing himself), he found the core of the character in Angel and learned very quickly to inhabit it.

To a similar measure, Charisma Carpenter found the best version of Cordelia Chase on this show. Cordy had already begun her evolution in the third season of Buffy going from a rote rich-girl bully into part of that shows core ensemble. Here, stripped of her Sunnydale setting, Cordy grows up and starts thinking about other people more than herself. By the time she left the series she's become, arguably, the co-lead along with Angel, a core member the show gravitated around.

The best character rehabilitation, though, was Wesley Wyndam-Pryce. As played by Alexis Denisof, Wes was originally a big doof, a dumb, irresponsible Watcher who couldn't do anything right. It took moving over to Angel, though, for him to become more than a caricature. Sure, he started off still annoying and goofy here but he eventually grew up, grew dark, and then came back to the light. he had a long, deep arc on the show and, by series end, his send off was one of the most tragic and most well-earned.

Looking at all the characters -- not just these main three but the rest of the cast like the reformed gang-member Gunn, the karaoke demon Lorne, the nerdy Fred -- we find that each of them have their own broken core, that it takes working together to find who they are and to grow as people. Buffy was always about happy, bright friends contrasting against the darkness, but Angel developed a family that lived in the darkness and found their own way through it together. That's why I like this series better -- it treats its characters better, giving them higher highs are well as deeper lows, and let them really explore themselves. Sometimes it's messy but it's always worth watching. 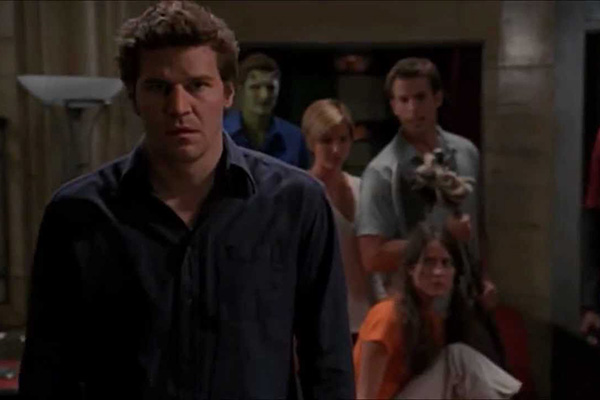 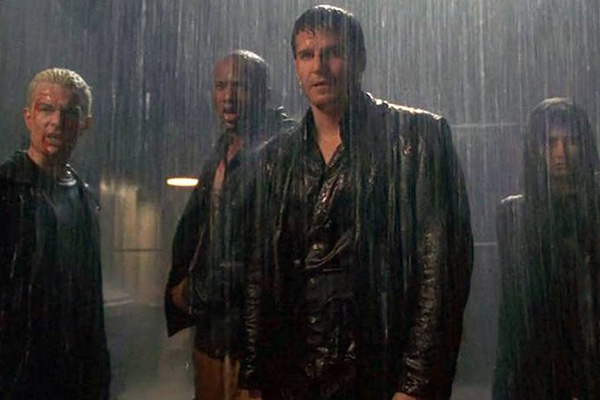 Complimenting the characters (who I've always felt composed a better over-all cast -- I really enjoy trio of Xander, Willow, and Giles, but Angel's collection of core characters were always more interesting to me) is a deeper storytelling style. While Buffy had a lot of "villain of the week" episodes mixed in with the "bad bad" centric ones, Angel eventually focused on long serialized stories. That's not to say the series didn't have self-contained stories but by third and fourth seasons the show went in full on long-form stories. It worked no only as a contrast to what came before but also to give the characters more ways to explore what was going on. It was interesting and a gutsy narrative move.

Overall Angel was a series that really pushed itself. It went to deeper places, motivated its characters to be stronger people, and then made messes of everything so that the characters had to find ways to rise above their own flaws once again. It was strong, well composed, and a great continuation of the Buffy franchise. Well worth watching.

The most episodic of all of the Angel seasons, this first did the hard work of getting the characters together and setting them on their path fighting against Wolfram and Hart on the side of the Powers that Be. The fact that it all this in the first episode and then had 21 more to explore the L.A. setting was commendable. There were plenty of growing pains, like the fact that it was never clear what the lawyers were up to (and, in fact, their plans only really came to fruition of continuing plot lines in to seasons two and three), and not all the case-of-the-week episodes were all that interesting. Plus, any time Buffy came to town the show stopped feeling like Angel and became Buffy L.A. which completely changed the energy of the show. Still, for a first season the show was pretty good and would only get better.

Moving into the second season, things became darker all around. Angel, dealing with lovers from his past (some resurrected as humans, others living as vampires) gives in to his dark impulses and starts a losing, one man crusade against... well, everyone. He fires his friends, takes his show on the road, and manages to alienate everyone ever. This changes the dynamic of the show and allows everyone to re-explore their motivations and their reasons for being on the team. It's interesting season of the show and one of the best the series produced. 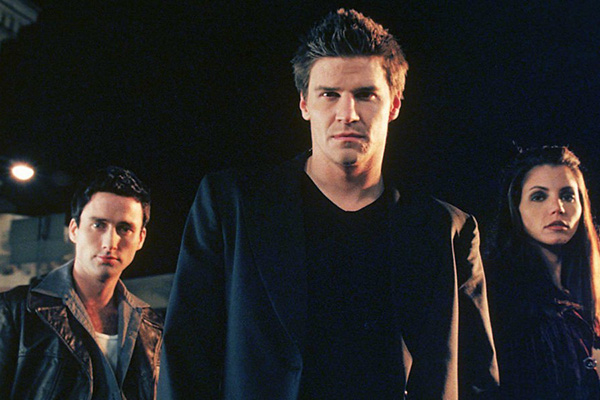 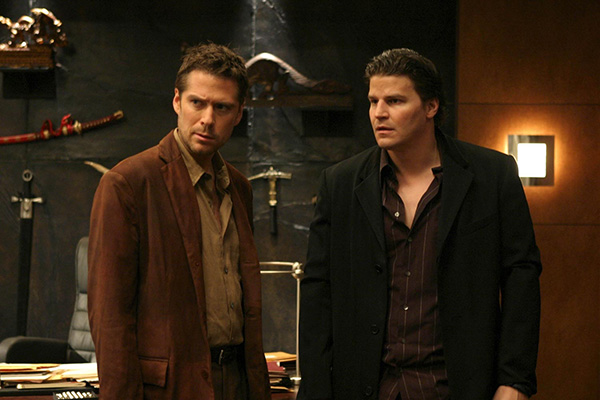 For season three the series doubled-down on the serialized storytelling, largely focusing on the war between Angel and a vampire hunter from his past, Holtz. Meanwhile, he also has his past lover, Darla, to deal with -- things get especially weird when it's revealed that Angel knocked Darla up despite them both being vampires. This creates a dual storyline of Angel and his own family matters fighting off Holtz and his new "family" of vampire hunters (and the fact that Angel actually killed Holtz's original family back when he was an evil vampire centuries ago). The season gets mired a little too deeply in the darkness having its characters make some pretty awful choices, but the constant push forward helps propel the series past any rough patches. Plus there's the bold choice to not tie up the story at the end of the season (unlike with every season of Buffy).

This then leads into the fourth season when Angel and his crew are first battling a powerful demon followed up by a newly born goddess. The season largely ditched the case-of-the-week format altogether, completely diving in to the big storyline. This does create the problem that if you aren't invested in the plot line you having problems caring about the season, but I personally dug the whole setup and the eventual payoff, so this season really worked for me.

Season five, though, pulled a bit of a reset. After all the work they've done fighting the lawyers of Wolfram and Hart, the crew ends up taking over the law firm (well, the L.A. office, anyway). This leads them to question what it means to work as heroes -- if they're in Wolfram and Hart are they still the good guys and what constitutes "fighting the good fight" when all their clients are demons? The case-of-the-week format mostly returns, but there's still a solid B-plot running throughout giving the overall season a nice long arc. The series end on a high note (even if the last episode wasn't meant to be a series finale), and this season is perhaps the best, overall, of the run.