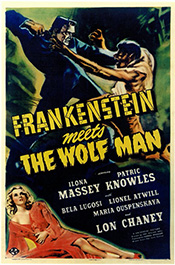 Four years after his death at the end of The Wolf Man, grave robbers go into Larry Talbot's tomb looking for riches from the corpse of the heir of the Talbot estate. However, disturbing his body, and exposing the dead flesh to the light of the full moon, wakes the corpse, bringing it back to life. The wolf man, alive once more, attacks the grave robbers, leaving a grisly trail in his wake. Later on, police discover a now-alive Larry Talbot and take him in for medical care, not realizing what's really going on. But Talbot knows. He escapes and flees, looking for the gypsies who once helped him and a cure for his affliction. His quest eventually leads him to the ruins of Castle Frankenstein where he soon discovers the frozen body of the monster. His hope is that, somehow, he can find a way to end his curse and find eternal rest. But can he do this before he, or the monster, kill again?

The continuity is, once again, a little sketchy, though, as much of the history of the Frankenstein series has been streamlined and massaged to make it easy for people to digest this time around. Elsa's father is never mentioned by name, he's said to have performed all kinds of experiments (which he really didn't), and the sanitarium from the previous flick is also implied to be the same place as the old Castle Frankenstein (which it wasn't). I spent a good part of the time in the back-half of the movie going "okay, so which version of events are we using this time" to explain where we were in the story (I do have problems shutting my brain off sometimes).

Ignoring the weird storytelling issues on the Frankenstein side of things, I did find myself enjoying this movie a fair bit more than either The Wolf Man or Ghost of Frankenstein. Much of that is probably because the story moves along at a fairly good clip. Giving Larry something more to do that simply fret about and worry over his carnage allows the character to feel more like agent of his own future. Sure, he doesn't always act smart -- releasing Frankenstein's Monster wasn't entirely intelligent, for example, and only causes more carnage -- but he's at least being proactive. The story does a neat job of tying the two monster together in some capacity, and justifies why so many people keep dying (even if, once again, most of it happens off screen). 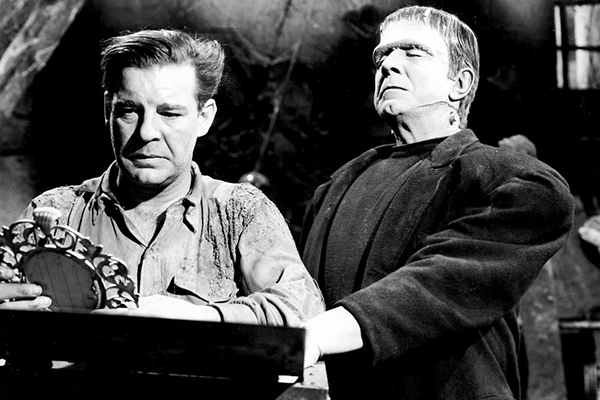 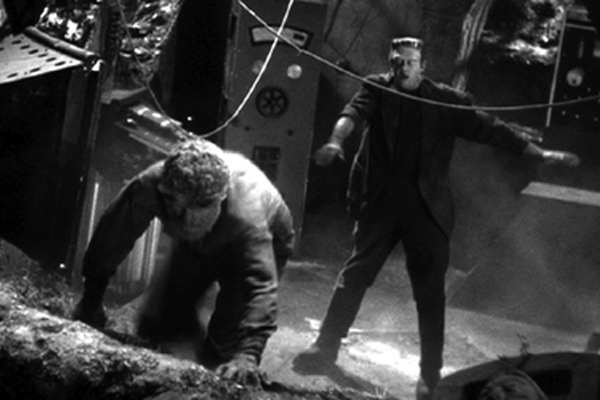 Chaney is, once again, good as Larry Talbot, a strong presence in the film that helps to sell the material even when other actors aren't up to his level. Most of the townsfolk are generic, one step above nameless extras, but even the Monster (as played by Bela Lugosi) and the Baroness (Ilona Massey) are pretty meh. At least in the case of Lugosi, this can be explained by most of his lines and story ending up on the cutting room floor -- he had a ton of lines, but they didn't play for test audiences, so his fairly talkative role was paired down to a few grunts and groans. The Baroness doesn't have the same excuse, sadly, and a fairly one-note, damsel role is played pretty blandly by Massey.

The biggest knock against the film, though, is that the two monsters don't really cause that much carnage. We do get one big fight between them, but it comes at the end and is over before it even really gets going. More time with the monster side of the monsters could have elevated this story further -- double the monsters should lead to double the fun, but there isn't nearly enough pay off. Still, the fleet film is entertaining enough for what it does and, at least, the story isn't the same Universal formula I've now watched over and over again. Different is good, and two monsters seemingly are better than just one.