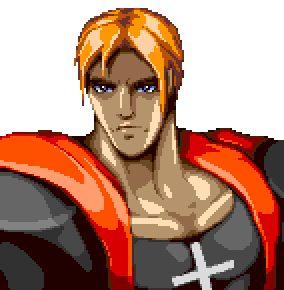 No, you didn't miss a game in the series; at least, not one that was released. Production work began on a new Castlevania game not long after Bloodlines came out. If you look at the history of the series, every year to two years a new game would come on (on some system somewhere). And then, after 1994, there was a three year pause. That was because of the cancellation of The Bloodletting.

As told the few snippets of information ever released for the title, The Bloodletting would have featured the continuing adventures of Richter Belmont. After handly defeating Dracula at the end of Castlevania Dracula X: Rondo of Blood, a new threat would have emerged (that, presumably, would have tied in to Dracula somehow). While Richter pursed this new problem he would have been dogged by a "rival", someone with similar powers who seemed dead-set on battling with Richter.

Who the rival was supposed to be, and how he was going to act, is entirely up for debate because the game never came out. The Bloodletting was intended for the the Sega Genesis 32X add-on which, like many additions for the Genesis, received little support and was quickly cast aside. Work on The Bloodletting was quietly stopped and, eventuall, the assets were moved over to the eventual next game in the series, Castlevania: Symphony of the Night.

The sprites of the rival, though, lived on. As many noticed, his sprites seemed to be based on Richter (thus the assumption that he was a rival vampire hunter with powers comparable to Richter). We at the Inverted Dungeon took to referring to the rival as Richter's brother, Hanz (because there are no bigger rivals than brothers), a creative liberty that has, apparently, stuck all these years later. We're sorry (and you're welcome).

His legacy continues, too, as there are multiple fan games that feature Hanz (usually by this name). We, too, took to including Hanz in our own webcomic, the Castlevania RPG companion DSWC. So while his time in the series may have been all-too-brief, Hanz carries on.

Everyone knows the story of Richter Belmont, heir to the Belmont lineage and wielder of the famed clan whip, the Vampire Killer. Fewer know, though, of Richter's younger brother, Hanz. Born not long after his more famous bro, Hanz grew up with a permanent chip on his shoulder. While others praised Richter and cheered on his many exploits ("did you hear that Richter defeated the dreaded three-legged minotaur of Warakiya?"), no one seemed to care about Hanz's many accomplishments ("Hanz, who?").

Eventually, Hanz gave up on trying to earn the praise of his own family. Instead he set off on his own to train and gain in power. He purchased his own powerful, magic whip from a gypsy (no refunds) and set off to fight many of the evils in the world (as Dracula's magic was ever present and monsters always seemed to seep out around the edges of the Borgo Pass).

Then came the day when Richter fought Dracula. This was a huge deal as fighting Dracula was what Belmont did. Hanz wasn't there to celebrate though, not that anyone noticed. A few months later, however, a new evil came forth: there were stories about a spectre, one that looked a lot like the evil sorcerer Shaft (you damn right!). The mystery required a hero to investigate it, which is just what Richter did. Hot on his heels, though, was Hanz who had recently come back from his self-imposed training. Although each took different paths to the castle, the two brothers repeatedly crossed paths. These encounters often came to blows and the two refused to work together, preferring to settle matters with fists (and whips).

Both arrived at the pinnacle of the castle just in time to see Shaft resurrect Dracula once more. Dracula took over Hanz's body at this point, using the Belmont as a conduit for his own power. It was up to Richter to defeat his own brother, something he did with no small amount of joy. Once the beat was (liberally) beaten out of the younger Belmont, Richter struck the final blow against the vampire's soul, sending it back to hell once again.

As they stood outside the castle, a crowd of villagers came to celebrate the day. They carried Richter and Maria off, cheering all the way back to the village. Hanz, though, was completly ignored, once again left alone as the older brother was celebrated. He walked off, away from town, swearing one day to have his revenge...

Hanz has never had his own game so he's never been officially playable. However, a number of fan games have included the younger Belmont (at times even featuring him as the sole playable character). Usually he's depicted as a palette-swap of Richter. He tends to be able to use his whip and sub-weapons, as well as retaining the ability to item crash. He doesn't always have the martial arts abilities of Richter, and that's normally just based on which version of Richter the creator's use as a base for Hanz's adventure.