This section is a quick-reference to all things Castlevania. Within you will find quick-pages about various topics of the series, which will then direct you to storyline discussions, reviews, character bios, and additional references. If you ever wanted a quick, easy to use directory of all things Castlevania, this is the section for you.

We do also have a Postmortem for the Castlevania series that looks at the overall trends of the series to think about how we got to a point where Konami has, essentially abandoned developing any new, mainline games for the franchise.

Titles are organized by date of their first release. Reference the full release schedule of all Castlevania titles to see exact dates for each region. You can compare this to the various video game generations to get a sense of the evolution of the wide game market in and around the Castlevania series.

The following entires are considered "in-continuity" for the main series (via at least one of the recent "official" timelines released by Konami). Remakes/re-releases and related materials are listed within the following pages.

The following entries are part of the Lords of Shadow sub-series. These games exist within their own continuity seperate from the larger series. 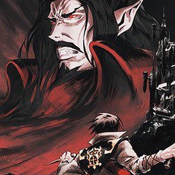 The following entries are part of the Castlevania Netflix streaming series. These shows exist within their own continuity seperate from (but informed by) the larger series.

The following entries were either removed from the main continuity of the series, or were designed to exist as seperate entities.

The following games were originally in-development for release, even had artwork shown for them, but were then eventually cancelled. They are tracked here for posterity.

Although not official entries in the Castlevania series, the Kid Dracula games acted as parodies to the main series, poking light at the conventions and formulas of the games while still delivering a fun, funny experience.

These games are outside of any official continuity. They feature characters/references to the Castlevania series.

These games are not only outside of any official continuity, but also were developed by companies other than Konami. They feature characters from the Castlevania series in entires far outside the official series.

Konami has a history of making of Pachislot, Pachinko, and other types of games based on their various properties. These are, eseentially, gambling machines where the players play for tokens they can turn in for prizes and such at the pachinko parlors. They're Japanese-exclusive and, by and large, have very little plot to them despite featuring artwork and characters from Castlevania (other other Konami franchises).