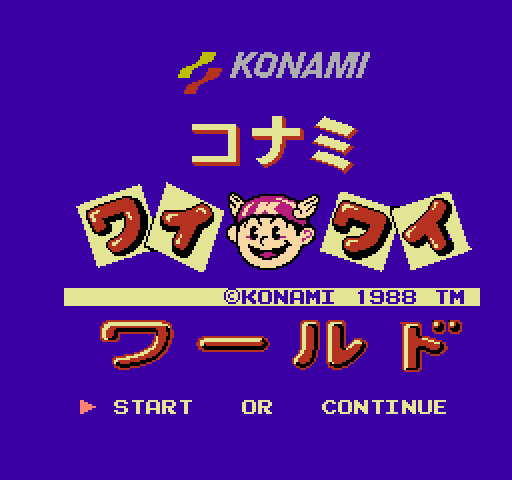 Ahh, the free-wheeling '80s. After the big video game crash that took out the American market (for a time -- see Video Game Generations), the industry rebounded, fueled in large part by the success of Nintendo. Game companies in Japan took over the market, releasing hundreds (and hundreds) of successful games and game franchises, and any number of companies felt free to explore new ideas and fun flights of fancy.

As if to prove that point, look no further than Konami Wai Wai World, a crossover game featuring many of Konami's heroes. The game stars Konami Man and Konami Woman, mascots for the company who appeared in various games (although usually not as a playable character). The goal of the game was to play though six main stages in any order (and then two final stages), all to take on the evil Waruda and stop him from taking over the Earth.

As this is a Castlevania site, our interest in this game is the Castlevania stage of the game. As Konami Wai Wai World was released between Castlevania II and Castlevania III, many of those games' assests were reused for Konami Wai Wai World (music, similar graphics and enemies, plus some stage elements). Additionally, Dracula appears near the end of the stage (as a kind of boss for the area, although bosses in the game worked rather strangely). Finally, upon befeating Dracula, players can unlock Simon Belmont III for use in the game (and he plays like the classic Belmonts from the series).

Still, there's a lot of interesting things about Konami Wai Wai World beyond the Castlevania portion of it. It was a fun, funny little platformer that didn't take itself too seriously. While it was never released in the West, it did see re-release in Japan on cellphones (as many of their classic game had). Plus videos are available online so western fans can at least see the game in action (without having to resort to illegal means). For the Castlevania completionist, it's better than nothing.

Much like a Castlevania game, too, this game is devilishly hard. Old-school hard, and then some. Of course there the aforementioned pits, but there's also a ludicrous amount of enemies, one that respawn instantly if the screen scrolls even a little past their spawn point. Many of the fire projectiles too, and then constantly pouring forth (at times no matter how many are killed), making some levels a struggle just to clear them. And for some reason the programmers design the camera exceedingly poorly, cauing the screen to scroll only when the heroes are near the edge (instead of in the middle) -- enemies appear with little time to react to them, only making it more likely that the heroes will get hit. Often.