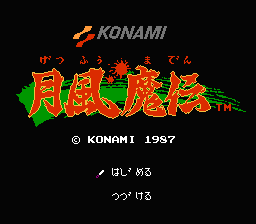 Konami really enjoyed making weird games back in the NES era. They rarely found a title they couldn't add in some elements of the Metroidvania genre (even before that genre had a name). If they had a platformer you could expect them to shove in some item collection, a explorable overworld, and more. They wanted you to really explore their games and not just sit down for a quick 15 minute section.

The Japan-exclusive Getsu Fuma Den neatly fits into that development style. Released in 1987, the game features a strange blend of overworld exploration, linear combat zones, and over-the-shoulder dungeon crawling, all to aid in the quest of demon hunter Getsu Fuma. It is, frankly, a real oddity (and I say that having played through Konami Wai Wai World.

That's likely the reason this title didn't get a release outside Japan. It's weirdness, along with it's demon-based mythology and religious themes (which Nintendo of America usually had edited out of games for the West) made this title a hard sell for Western audiences (and porting it out of Japan). The game never even saw a sequel, despite it having a number of charms. While the character of Getsu Fuma has lived on in other Konami titles, appearing in the Wai Wai World games, along with cameoing in other Konami releases, this game remains a weird one-of from a bygone era, a testament to the strangeness of many of Konami's ideas.

The Story of Getsu Fuma Den:

Once, the world was protected by three brothers, great heroes of the Getsu clan, who fought the demons with their powerful Pulse Blades known as the Hadoken. Feared by demon kind, these heroes were the last line of defense preventing the world from being overrun by evil. Unfortunately a powerful demon from the depths of Hell, Ryukotsuki, escaped the underworld and attacked the brothers. All three were defeated, their powerful swords stolen by the demon and hidden away so that no other heroes could rise up to fight the demons as they sought to conquer the world.

Once you start gaining powers, and getting the feel for the game, things smooth out and the game starts to get good. But that's a steep climb and I wouldn't be surprised if a number of gamers were turned off by the brutal difficulty of the early going and didn't bother sticking around for the mid-to-late game. This is the kind of title I would have rented back in the day, played for an hour, gotten pissed off at, and then quit and never load it up again (although, since the title was Japan-exclusive I wouldn't have been able to rent this title specifically).