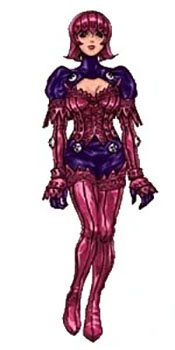 When Castlevania for the Nintendo 64 was in development a number of characters and ideas for the game were pitched. Some, like the hero Coller, were just far enough in development for their basic details to be revealed. We know that character would have been one of Frankenstein's creatures (or something akin to that), but he would have been good, picking up his chainsaw and shotgun and venturing into Dracula's castle to fight the evil spreading out. We even know that one of his stages, the Tower of Science, was eventually re-purposed as a stage for Carrie Fernandez.

Other ideas for the game, though, didn't make it nearly as far in development. Coller was to have a foe, the creatively named Coller2, who would have been a sort of sister-creature to our hero. She would have stood against him, presumably lured to Dracula's side by promises of power, or just simply because she was a monster and all monsters eventually end up in Dracula's castle. Sadly once Coller was cut (his basic model eventually turned into the Gardener that wanders the Villa of that game), Coller2 also hit the cutting room floor.

Not much is known about Coller2. We don't know what she would have been like, nor what any of her powers of abilities would have been. She's an analogue, story wise, for Rosa or Ortega, but due the lack of development notes on her character, nothing more than simple drawings of her actually still exist. She was dumped, never to be seen again in any form.

I'd say she got the short end of the stick, but Coller wasn't treated much better. Clearly it's hard out there for a flesh-golem.