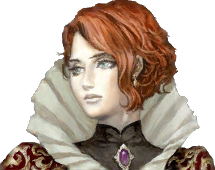 For many years the Elgos Order was tasked with protecting the Grimoires of Souls, powerful books that trapped and contained the very essence of the power of Dracula. These books were kept under lock and key with only a select few able to access the books (let alone even know of their existence). Hermina was one of these librarians, and it was her task to ensure that the magic of the dark books was contained.

Quickly, though, Hermina began to realize that something else was taping into the grimoires. It became apparently to Hermina that whatever this force was, it was using the magic of the books to resurrect and recreate various eras of Dracula's reign within the books themselves. Fearful of what could be done with these books, and the power within, Hermina stole away from the Order with a few books tucked under her arm, wanting to secret away their power from nefarious forces.

At some point she contacted Soma Cruz, the college student who also was the reincarnated soul of Dracula (although he was good now, so that was nice). Knowing of Soma's power of Dominance, his ability to absorb dark souls within himself, Hermina teamed with Soma to try and collect all the vital souls within the grimoires so Soma could lock the dark magic away. Sadly, things didn't go exactly the plan.

After these two heroes broken back into the Order to collect the souls they were confronted by a whole cadre of heroes from past eras. Resurrected form their tomes by Lucy Westenra, these heroes were also attempting to collect the vital souls so they could stop Dracula's resurrection. However, Hermina couldn't trust Lucy's motives, or that of the heroes that might have been under Lucy's control, so she and Soma stole what souls have been collected and fled. These stolen souls, though, were very dark and powerful and they twisted the light within Soma. He went dark, becoming Dark King Soma, with a desire to steal all the souls for himself (as his new personality of Dracula proper).

Realizing this menace could be even worse than Dracula, Hermina gave chase, aligning herself with the resurrected heroes to try and stop Soma. Eventually, they were able to trap him in a Grimoire dedicated to his previous adventure in 2036 AD and there they cleansed him of the dark magics that had tainted his soul, freeing him.

Unfortunately the dark magics still existed and a different player stolen them away. Seward revealed himself to be Death, the loyal right-hand of Dracula. With the dark magic under his control he fled into the book dedicated to the first time Dracula was defeated, 1476, in the hopes that with the power, and the original era, he could change history and ensure Dracula never died at all.

Sensing no other recourse the heroes had to follow, but the book was so old they couldn't just summon Trevor Belmont and use his connection to the book to go within. Instead hero Richter Belmont used the power of his Whip's Memory to summon Trevor that way and, with the power Hermina offers as she was revealed to actually be part of the Lecarde clan, they were able bring the eldest hero of the group forth.

The heroes then ventured to the recreation of 1476 AD and, within the ancient castle, battled their way to Dracula's chamber. There they fought together against the resurrected Dark Lord, defeating him and dispersing his dark magic once and for all. It was hopes that, this time, Dracula was truly defeated and it was all thanks to the foresight and help of Hermina.