The Castlevania series commonly draws its monsters from multiple sources: mythology and pop-culture. Most enemies seen in the game will have some time to ancient myths and legends, and the biggest bosses and greatest bad-asses will have featured prominent in many sources from pop-culture media. It's unusual to find a creature in the series that doesn't seem to come from any previous source.

Zephyr would, seemingly, be one of those rare monsters. Although it's possible the creatures name comes from Greek myth, that of the gentle, fruitful West Wind of Zephyrus, hos form and function differ greatly. Although the god would sometimes get jealous (as all Greek gods would do), visiting down vengeance on those that he felt ill towards, it's hard to make a connection between that deity and the monster of Zephyr. The Castlevania baddie has the power of time manipulation, sometime quite different from anything attributed to Zephyrus.

It is, in fact, quite likely that the producers had an idea for a monster and the power he'd have (and, thus, the soul he'd bestow in Castlevania: Dawn of Sorrow) and elected to simply add a name to the creature afterwards. There has, of course, been no confirmation of this one way or the other, making all of this simply fan supposition. Without a better information, though, this is all we can assume. 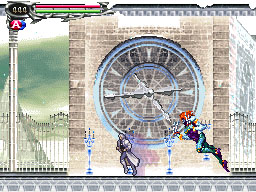 First encountered at the top of the Cursed Clock Tower in Dawn of Sorrow, Zephyr appears as a tall, lanky beast with sharp claws on both hands. He runs in, slowing time as he goes past, all to make a grand entrance, and then the fight begins. Zephyr has a few attacks he'll commonly use: he'll slash at the hero, or throw a dagger at them, or he'll leap at the nearby wall and then bounce off, throwing knives at the hero as he goes past. If the hero attacks Zephyr while the monster has a glowing aura, the creature will also use his time manipulation powers: he'll either slow time so he can move quickly, performing a dashing slash towards the hero, or he'll leap into the air, arcing over the hero, while positioning daggers that will fall straight down once time resumes.

All of these attacks can deal solid damage, but Zephyr will also provide plenty of time for the hero to retaliate. He likes to walk slowly towards the hero, as if taunting them, providing chances to attack and layer on damage. Just be wise and be at the ready to leap away lest Zephyr come in with one of his quick attacks.

Zephyr appears again in Castlevania: Portrait of Ruin in the battle arena section Nest of Evil. There Zephyr functions about the same, although his basic dagger toss attack now features three blades. Otherwise the same basics of the fight remain. Naturally, with how much powerful the heroes of the game are (in comparison to Dawn of Sorrow, Zephyr's fight here is considered to be one of the easier boss battles in the Nest of Evil.