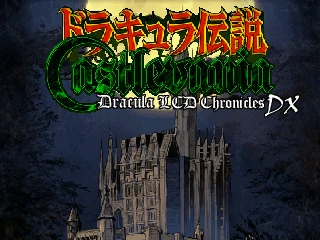 Do you remember that crappy old LCD Tiger games? You know, the ones that have characters "moving" on minimalist screens, with a single cell of art behind, giving the barest minimum of graphics for what could kindly be considered a "game". We've actually touched upon them before in both the Castlevania II: Simon's Quest and Symphony of the Night forms and both of them were, honestly, pretty terrible. Tiger was known for crapping these games out at five bucks a pop, not for actually making good titles.

Still, someone out there apparently liked the game because, wouldn't you know it, they built an entire homebrew project around it. That fan, Ericard, took their PSP copy of Castlevania: The Dracula X Chronicles and homebrewed their own tribute to the Tiger games. Titles Castlevania Dracula LCD Chronicles DX, this is actually a fairly robust collection of what is, essentially, a fan tribute to two of the worst games in the series's extended media.

There have been three official releases of the game that we at The Inverted Dungeon were able to track down. Over the course of those three releases the game has seen ports of both the Tiger versions of Simon's Quest and Symphony of the Night along with a new game in the series, a "de-make" of Castlevania Dracula X: Rondo of Blood plus a new mode, Shin Dracula X. There were even plans for more to be added to the game, in a "Generation" release, but we simply couldn't find a trace of this one on the developer's site or in their forums.

What's interesting is their intent to essentially remake the entirety of the Dracula X series (plus the Tiger adventure of Simon Belmont), in cruddy LCD format. Having versions of both Dracula X and Symphony joined, if the last release ever comes out, by unofficial sequel Shin Dracula X (a hoax game title that apparently the fan developer took to heart) and a story mode based on the Symphony sequel novel Castlevania: Ricordanza of the Gods Abyss, that's all pretty noble and interesting. If that ever comes out it'll make for a very strangely complete package.

The thing is, once you boot up the game you have to face reality: you're playing a LCD game. I mean, it's a very loving tribute to them, to be sure. The graphics are as muddy as the originals (even in the new modes), and as a nice touch you can see every sprite in the game on screen (as tan) waiting to be "lit up" by the black LCD. Like, from a technical stand point, the develop has done a great job of recreating (and adding) to the LCD games of old, creating perhaps the "best" version of these games you could ever hope for.

But is that really worth it? You're still stuck playing an LCD game and, as we've noted before, these games are pretty awful. You're stuck with a hero that doesn't so much move as display two frames of basic "walking" as minimal "background" tiles move around them. Enemies come on, have three frames of animation and then get killed by your hero. The heroes themselves have only so many things they can actually do: attack in front, attack behind, jump attack and use a sub-weapon, all of which are displayed with the minimal amount of frames possible. It's lovingly ugly, basically.

Sound-wise, the games limit themselves to the same technical specs of the original two titles. That means you basically get two type of tinny beeps and that's it. Yes, it's true to the game, and it works, but after a while the beeps get pretty grating. I mean, to the games credit, that's kind of the point. This is a lo-fi package that stays true to the intent of the original titles in just about every way possible... well, except one.

For whatever reason, the developer has put a soundtrack behind the games. Sure, it draws from the PSP Dracula X Chronicles to play the music, but the fact that it has music seems a little odd. Everything else about these games is presented as low-tech as possible, but then there's high quality music playing along side. It throws me off because, in my head, I either want there to be no music, to stay true to the source material, or I want everything to get an equal upgrade to go with the music. It leaves me in this weird middle zone where I'm both annoyed by the low-tech games and the high-quality music at the same time. 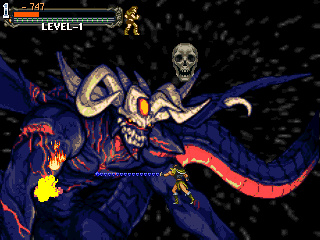 Oh, and if you had trouble getting through the hand held titles in the past (I know Tiger's Simon's Quest always defeated me) don't expect to fare any better here. The new titles, just like the old, are unfair and brutal, with the heroes taking hits they can't avoid, getting swamped by enemies they don't have enough time or frames of animation to take out, and bosses that are just ridiculous. These aren't games that are meant to be beaten (without cheating), and this fan-game is true to that. Everything here is just as frustratingly retro as you remember.

Now, if you can find a version of the more complete game (some fans apparently were able to try it out, even if I couldn't find that edition) there's apparently an enhanced mode that plays like a new, and better, game. That one featured proper 16 bit sprites, a multi-warrior battle mode, two-player action, and a ton of added characters. But, as I noted, I was never able to track down that game and, as such, simply can't say how good it is. I have to go off the games I can find, and this version of just the LCD games is all that was available.

Some of this difficulty, mind you, maybe be due, in part, to the fact that English is not Ericard's first language and a lot of the text on his site is frustratingly hard to parse. Most fan sites that have covered these games simply take the text from his site and spit it out verbatim, making it that much harder to track down good sources of info. Without a complete and proper record of what's going on with this game (or if it was even released to wider audiences), I simply don't know where the final version of this game is or if it even exists anymore. In the world of fan-games, this happens all too frequently. As such, for now, the best I can report is on the LCD games in this weird little collection. It seems like the developer had a lot planned for this title, and I wish I could play that version of the game.

If you have a jailbroken PSP and the Dracula X Chronicles to play it with (both of which are required for this homebrew), then the DX edition of the game is fun as a lark. But, just like the original two hand helds, this collection will only entertain for so long. As a certain point you'll look down, realize you're playing a Tiger hand held, and decide to go off and do anything better with your life. I love that a developer decided to make a tribute to these old games. But now that I've played them I don't really see myself going back.