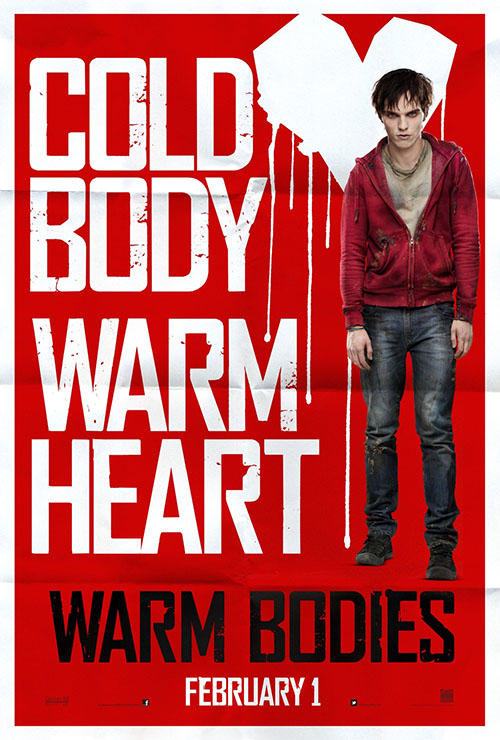 The Hollywood YA boom certainly produced a number of terrible films during it's brief spat of productions. There were any number of failed films (at least from a critical perspective) that helped to show the flaws in the genre, films like the last two Maze Runner movies, all of The Divergent Series, four out of five Twilight movies, and then Mortal Engines, just to name a few. There were a few good movies -- a fair chunk of the Harry Potter series, most of The Hunger Games, the first Percy Jackson -- but it was rare to find a film that both embraced the conventions and tropes of YA storytelling but still managed to craft a good film in the process.

Coming out in the middle of all the YA madness was Warm Bodies. If Harry Potter could have wizards and Twilight could have vampires, Warm Bodies theorized it could find similar success with zombies. It setup yet another post-apocalyptic world, which made sense in this context because of the zombies, and then set about doing the usual boy-meets-girl meet-cute (or would that be "meat-cute") storytelling that was so very much a part of the YA genre. It used the genre to craft a funny and amusing romantic comedy and the only real tragedy is that more people didn't warm (pun intended) to its funny ways.

Of course, the film had a little help getting it's YA story off the ground. The film builds it's zombie boy-loves-human girl story on the back of William Shakespeare's Romeo and Juliet, the world's first YA romance. That one ended rather poorly for the two young lovers, but when one of your characters is already dead I suppose it's easy to not have to worry about that. Suffice it to say that all of these influences and ideas mixed together well and, instead of being a giant mess it actually made for a fun and enjoyable zom-rom-com.

In the film we're introduced to "R" (Nicholas Hoult) a zombie who was a teenager before he died. He's been wandering an airport for years, trapped in the endless cycle that so many zombies are stuck in. He wanders, he occasionally grunts at his best friend, "M" (Rob Corddry), and then goes home to a plane he re-purposed as his nightly retreat (and also the place where he puts all his stuff as he's something of a zombie hoarder). Sure, he still eats brains but he feels conflicted about it (as we learn from his in-the-head narration). Clearly there's more to R than just being an undead thing, if only he could find a way to express himself. 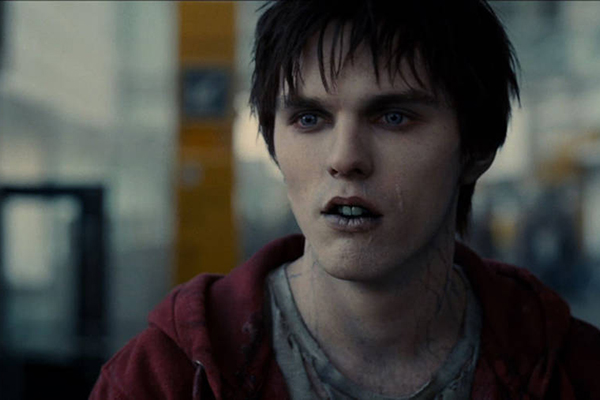 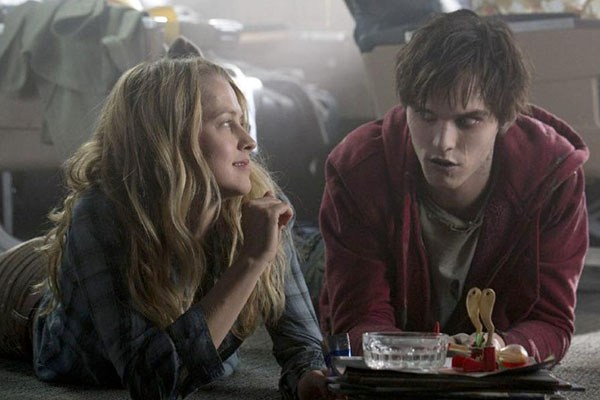 Things suddenly shift for R, though, when he meets Julie (Teresa Palmer). While out hunting with M and their various zombie acquaintances, they stumbled upon a human raiding party. R is instantly drawn to Julie and, after eating her boyfriend Perry (Dave Franco), R decides to protect Julie from the zombies. He puts a little of his stinky blood on her to mask her scent then drags her with him back to his plane so they can hide out there. Over the next few days R begins to learn what it was like to be human. He starts speaking, he starts caring, and he realizes (eventually) he doesn't want to eat brains. Julie has awoken something in him, a warmth in his body that causes his heart to slowly beat. And if he can be cured, maybe the rest of the zombies could do. Well, at least those that haven't ripped off all their skin to become monstrous Boneys. Those guys are the worst.

At it's core Warm Bodies isn't really all that daring of a film. A boy of one faction meets a girl from another faction and, through unusual events, the two end up falling for each other. This is all cast against a backdrop of a world on the brink of ruin, held together with spit and duct tape after a terrible war brought it all down. Throw in a largely teenage cast and you have this film, but just about every other YA movie produced in the last (many of them, like Warm Bodies) released by Summit Entertainment and Lionsgate. Oh, and it's based on a YA novel (of the same name) like all those other films before. If you were tired of all those YA films then it would seem like this movie wouldn't have been for you.

With that said, there is one very clear difference between this movie and so many others: the narration of the piece by R, trapped in his own zombie head. Sure, other YA films had narration (like Tris in Divergent telling us way too much about her world), but those films used it as dramatic world building. R, on the other hand, is a sarcastic, unreliable narrator. He jokes about his life as he get an easy-going vibe set up for the film. This is probably one of the more enjoyable zombie films of the last couple of decades, right up there with Shaun of the Dead (another hilarious zom-rom-com).

Honestly, the comparison to Shaun is a solid one, not because these films have much in common besides being zombies comedies, but because they're each so clearly parodying other subjects. Shaun was a send-up (loving as it was) of the Romero zombie films as well as British culture. Warm Bodies has the YA genre as its target. toying with the tropes as it tells it's own brand of comedic story. It works because the narration from R is funny and the lead actors are enjoyable. Without that narration sending up the world of the film it really would be just another YA post-apocalyptic film. 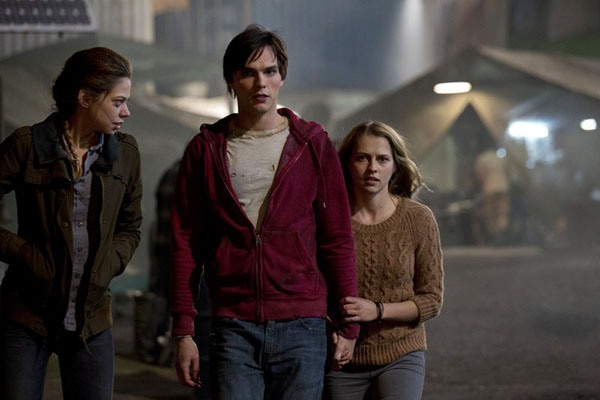 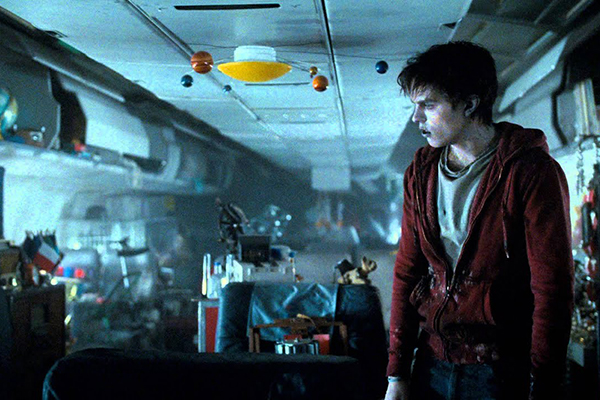 And, in fact, as the film wears on the movie does lose some of its comedy, getting more invested in the humans v zombies v boneys storyline. I can appreciate the film for focusing on the story in the end as it manages to create a fun one-and-done movie story that doesn't need any sequels. But it does sacrifice the comedy some in the third act and that drains a bit of the fun away. R and Julie hanging out while he talks to himself is hilarious. R as action hero is less interesting.

Still, any weakness of the last act is more than balanced out by the great first two acts. This is the kind of fun, easy going film you can pop on when you find it and enjoy your time spent with R and the gang. It's low stakes enough, and silly enough over all, to carry you away for an hour and a half. What more do you really want for a low-effort YA comedy?