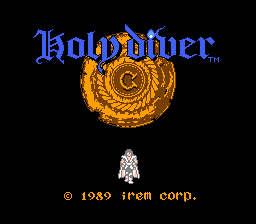 The NES certainly had it's share of odd-ball titles and lesser known adventures. Holy Diver (titled Hori Daiva, a phonetic Japanese spelling of "Holy Diver") is one of those games that you'd expect would have been more popular, but a number of factors combined to keep this as a title many of us never heard of (at least until 2018 when the game was finally released worldwide with a physical copy, in limited numbers). Created by Irem, this is a game that could have been a real hit, but subject matter, and in game artwork, would never have allowed this to pass the Nintendo of America smell-test.

If you didn't grown up in the classic gaming era, you may not be aware that NOA was very strict about the kinds of materials that could be in games released on the NES in the U.S. Religious subjects, and even crosses and other religious items, could not be included in games. Even mention of certain, obvious words was not allowed. For instance, "Holy" is a spell in the Japanese version of Final Fantasy, but the spell had to be renamed to the much less descriptive "Fade" for U.S. release. Obviously, a game seemingly titled after the debut album of heavy metal band Dio, "Holy Diver", would not be able to retain that name in the U.S. That, coupled with crosses and other religious imagery in the game, caused developer Irem to simply decide not to release the title overseas.

At least that's the story spun around the Internet at this point, and likely its true. Even if not, I don't know how popular this game would have been with Western audiences. It likely would have gone down with a lot of other "hard as nails" NES games (like Battletoads and Snake Rattle 'n Roll and, well, anything else made by Rare in that era) as games you played more as a dare than ones you expected to defeat. Make no mistake this game is hard, punishingly so, as if the developers really never wanted you to beat the game. It is, in short, a game I doubt most kids back in the day would have been able to defeat. Controllers would have been broken in many homes.

In the game you take on the role of Randy, a knight dedicated to taking on the Demon King Black Slayer. After years of training, Randy has to head into the lands of the Black Slayer and take on the evil demon, and his hordes of the damned, to save the lands of the Crimson Kingdom. He does this by running and jumping through six stages, attacking everything he finds with his basic, low-range fireball attack, along with the various magic spells he finds throughout the game. Good attacking, twitch-reflexes, and solid movement are all requires to make it through this title. 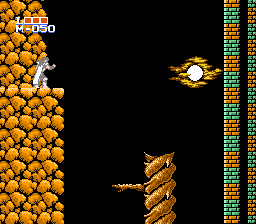 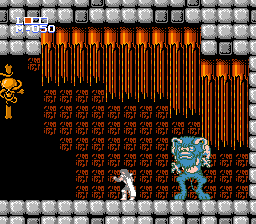 The basics of the game will be familiar to anyone that has played a platforming game. Your hero will run, jump, and attack like you'd expect. His basic fireball attack comes out quickly and can be repeatedly hit, leading to a lot of damage that can be unleashed quickly. That's great in the early stages where you have simple enemies that can die easily in a single hit. Adding to your power are basic health and magic increases, giving you a little more power and survivability (which you'll need as the difficulty increases).

Where the game differentiates itself is in its magical powers. After defeating a boss, Randy will gain a new magic spell which he can activate, and use, at will. These range from Blizzard, which freezes lava and has limited time-stopping abilities, to Overdrive, which can create floating orbs that cycle around the hero. These can all prove useful in limited circumstances, but between Randy only having so much health, and many of the late-game enemies being damage sponges, many of these spells seem less useful than they otherwise could be.

Blizzard is the most useful, since it can freeze the lava that appears in certain areas. It's especially important for the game as it gives the title a pseudo-Metroidvania qualities. Some items can be set in areas you can only access with the freezing ability. Some of these items, too, can be essential to traversing the game, such as the high jump boots. Technically you can skip this key item, but if you do you'll reach a point late in the game where you can't explore any further (and at that point there's no going back).

At the same time, though, it's hard to say just how far most people will get into the game to experience all it has to offer. There's a lot of creativity that went into the game, combining aspects of classic platformers with exploration titles and even a little bit of shooters and bullet-hell titles. But the game is ridiculously hard, frustrating to the point that many people likely would have played it for five minutes and then ditched it for something a little easier to manage. Had this game come out in the U.S., it's easy to think NOA might have asked for the difficulty to be toned down (if Irem didn't do it themselves). There are so many enemies on screen sometimes, causing slow down as well as unavoidable attacks, that you have to wonder if Irem even thought the game was beatable. 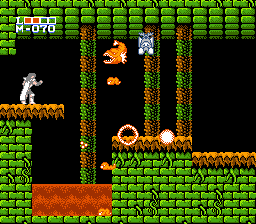 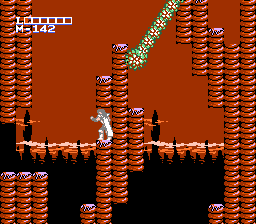 And yet it has its charms. This is certainly a game that could live on in infamy, the kind of title hardcore players enjoy and the rest of us watch in awe as they somehow complete this impossible title. It's a pity, then, that the game never saw wide release outside of Japan. Yes, it's hard, and mean, and impossible, but it could have spawned its own weird legacy as the kind of game everyone has tried but only a few have ever truly mastered.

Design-wise, Randy does bear a striking resemblance to a Castlevania hero. His basic fireball has about the range of the classic whip, and while it can be unleashed faster, it also seems weaker in the long run, making it about on par with the famed weapon of the series. Randy's magical spells also bear a strong resemblance to sub-weapons, especially Blizzard which functions as a combination of a freeze spell and the classic stopwatch.

Honestly, though, this game bears more of a resemblance to related title Getsu Fuma Den, itself later acknowledged as an offshoot of the Castlevania series (thanks to Castlevania: Harmony of Despair). Both titles focus on a lone hero fighting a demon lord, battling through waves of enemies in hellscapes, collecting limited explorational items to aid them in combat. They share the same kind of DNA, which makes you wonder if Irem drew their own inspiration from Konami's demon-hunting title.