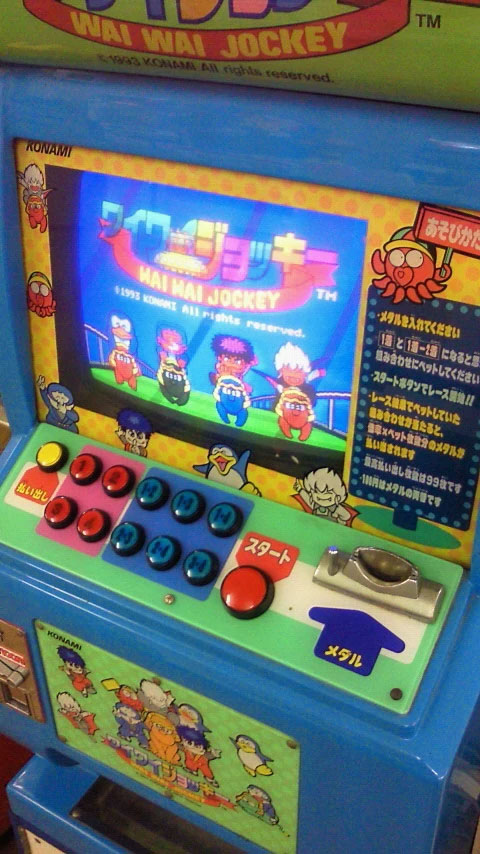 Another gambling oddity from Japan, this marks the third entry in Konami's Wai Wai arcade gambling series. As with the previous titles the basic goal is to place your medals/tokens into the machine and somehow interactively bet on what's going to happen in the hopes of getting a bunch of tickets back (with which to buy prizes and so forth).

Wai Wai Jockey, as the name implies, is all about horse racing. From the looks of the machine (and right now that's the best we have to go off as video of the game in action doesn't seem to exist -- the best we can find is Wai Wai Jockey Gate-in! created by Jaleco and Casio in 1984, which is an unrelated horse racing title), players will bet on the outcome of the race via a variety of bets -- who will come in first, second third, and a variety of other combination positions (which presumably had differing payouts).

Bets locked in, the player then seems to have a start button they could push to start the action. Then it's watching a virtual horse race (including perennial Wai Wai entrant, Kid Dracula). And that seems to be about it; it's video horse racing, just with cute Konami characters instead of actual horses and jockeys. We're sure it was positively thrilling (with all the sarcasm that implies).

Honestly, this isn't the least interactive gambling machine Konami made (Piccadilly Circus: Konami Wai Wai World is worse), but it's certainly up there.

Wai Wai Jockey has no review. You could be the first to review it! Contact the staff of the Inverted Dungeon to contribute.