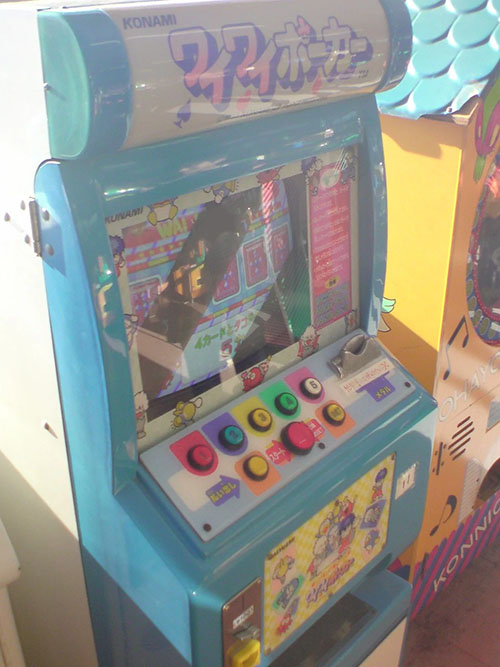 The last of the Wai Wai-themed gambling machines to feature Castlevania content, this is another entry in the basic, bare-bones medal/token-based gambling machines released by Konami during the mid 1990s, all of which features Konami mascots to try and sell fans on playing the games.

This time around Wai Wai Poker presents us with, yes, video poker. It's actually a pretty standard video poker game: the game deals you out a five card hand and you want to try and get standard poker combinations -- flushes, pairs, three-of-a-kind, and so on. Like what you get and you can keep your cards by pushing to associated buttons on each of the card columns. Any column you don't reserves is then given a new card, and then the game lets you know if you've won.

Despite the look of basic five card draw, there is one key difference here that likely kept players from winning as much as they would on a standard five card machine: the cards don't have numbers. This means that while you can pair up your mascots (including Kid Dracula, of course), you couldn't make standard straights in the game. One less way to win.

To the game's benefit, though, there are only five face cards in the game, each with a Konami mascot, so the lack of numbers isn't as bad. Still, it does limit the number of ways the player could try to win, and reduced the overall effectiveness of the poker experience. And since the only thing the characters do is stand on a card (without any other animation), this is a very limited Wai Wai experience, indeed.

Wai Wai Poker has no review. You could be the first to review it! Contact the staff of the Inverted Dungeon to contribute.