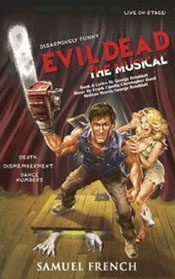 Editor's Note: This review is based upon a performance from the Toronto 2003 production.

We open with five friends driving into the dark, dark woods to stay in an "old, abandoned cabin," not knowing the danger that awaits them. You see, hours earlier (probably), an archaeologist, who just so happens to own this old abandoned cabin in the woods (and was staying there, thus rendering it less abandoned than before) was translating, aloud, from the Necronomicon Ex Mortis (roughly translating as "The Book of the Dead"), a tome capable of unleashing great, demonic evil upon the land.

Bear in mind, as stated, he read the book aloud. He even tape recorded it so that our five intrepid vacationers would be able to stumble upon the recording, play it, and only make matters worse.

What then follows (and I won't go into detail if you haven't seen the movies it's based upon), is a light-hearted, musical gore fest where our heroes try to fight off the ever increasing (and musically-talented) army of the undead (Deadites to those in the know).

Evil Dead: The Musical is a hard beast to critique. It's not as though the original Evil Dead, or really even its sequel, were big-budget productions, nor were they classics of fine cinema (as classic as they are). No, both films were low-budget schlock fests, and any intellectual or creative property based upon them usually has shared a certain schlocky-ness.

In a sense, this low-budget sensibility is an asset to Evil Dead: The Musical. The production wears its low budget cheesyness on its sleeve. Many of the set pieces and action bits are played for laughs, and even the best bits are truly appreciated if you're a true fan of the series (bits of the third flick, Army of Darkness are even thrown in to tickle the true-believers). And I guess that's who's supposed to enjoy this production (those who are likely to see something called Evil Dead: The Musical).

In fact, I'd go so far as to say that if you haven't seen the first two movies (number two especially), you will probably want to watch them first, not only to enjoy the musical more, but also so that the best bits of the movies aren't ruined by the musical.

What makes the production fun are the nods to the original two flicks: the evil hand, the talking moose, the chainsaw, the stolen dialogue, the break between acts (right about where the two movies join together) where portions of the plot are conveniently reset. It's a musical love letter to the original movies, and if you're a fan, you'll have a good time watching it.

That said, the weakest part of the production is certainly the music. At the times the songs feel like they are shoe-horned into the plot, and not that the plot natural flows through the songs (one in particular, "All the Men in My Life Keep Getting Killed by Candarian Demons", felt so forced that I started tuning out part way into the song -- never a good thing in a musical). And, even when the songs naturally flow and help progress the plot of the show, they're never that engaging. Some of them are toe-tappers, but none of them make you want to go out and buy the soundtrack for the musical.

And so the show, based on its strengths, really will only appeal to one group: the fans of the movies. If you're a fan, then you'll have a good time seeing the musical. If you've never seen the movies, watch them first then decide if you care to watch an amusing take of the flicks (with singing and dancing). If you hate the movies, well, then you probably already know this show isn't for you.