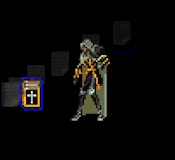 The Bible was a later addition to the Castlevania series, at least as a sub-weapon. It was originally intended for inclusion in the very first Castlevania, although its power -- to grant invincibility to the hero -- was shifted to the potion instead. One could assume this was because of Nintendo of America's stance blocking overt religious references in NES games. It was eventually used in the MSX port of the game, Vampire Killer, although its behavior was different: a White Bible would make merchant prices cheaper, while a Black Bible would make them more expensive.

It wasn't until Castlevania Dracula X: Rondo of Blood that the Bible as a usable item was actually introduced. There it became the newest sub-weapon of the series (at the time), evolving into one of the mainstays, showing up in a few (although not all) adventures to come from that point forward.

In its first appearance in Dracula X, the Bible would swing out from the heroes, performing a wider and wider arc as it traveled around and around the screen before finally flying off (this is also how the sub-weapon works in Castlevania: Portrait of Ruin). This behavior was changed in the direct sequel, Castlevania: Symphony of the Night, where the Bible would tightly move around the heroes, almost like a protective shield, before it wore out. 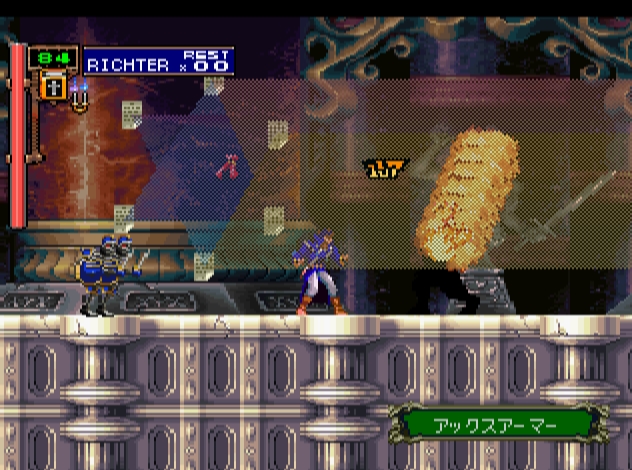 As it appeared in the Dracula X era, it's no surprise then that the Bible could also be "crashed". The Item Crash was a mechanic introduced with hero Richter Belmont in Dracula X, allowing him to perform over-charged attacks with each of his sub-weapons. The Bible, when crashed, would spiral forward, moving towards enemies in a deadly wave. This was changed, however, in Symphony, with the bible moving behind the hero before shooting out a beam of holy light.

When the Bible appeared in Castlevania: Harmony of Dissonance, it's behavior mimicked the original Dracula X use, but there were other ways to use the Bible. Hero Juste Belmont could combine the Bible with elemental tomes, creation power, "crash"-like effects. The Wind tome, for example, created two large Bibles that behaved like the Symphony of the Night version of the sub-weapon, while the other books could create a swirling fire vortex, an ice weave, lightning beams, or a fairy summon.