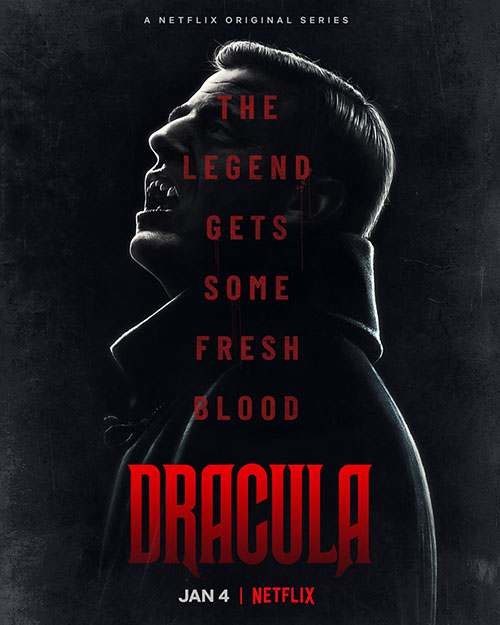 Over the years for this site I've watched my fair share of Dracula adaptations. Honestly, probably more than my fair share as most people, I'd bet, only see three or four of these suckers in their lifetime and I've managed to watch (repeatedly, no less), 30 or so different versions of Dracula and his various adventures. Admittedly that's only a drop in the bucket in comparison to the sheer number of adaptations of the original novel (or, sometimes, the play based on the novel) as Dracula is one of the most-adapted characters in all of pop culture. He's probably up there with Jesus and King Arthur when it comes to films based on his work (and certainly he gets to have more fun than either of those guys). I could spend a lifetime trying to catch up on all the various takes of the fanged freak.

Not all of them are straight adaptations, mind you, as many try to find their own "unique" take on the material. Often this just involves moving Dracula to modern times and thinking that somehow makes him "fresh" (yes, I'm thinking of Dracula 2000 which is anything but fresh). I don't mind the films taking liberties with the book -- as I noted in my review of the novel, the story is rather outdated and really comes not only from a specific era but one man's specific perspective of that era. Part of the reason why Dracula has been updated so many times over the last century-plus is because different writers can add their perspective to the basic bones, coming at the film from a frame of reference different from Stoker's perspective as an Irish male of a certain level of means. This shades the story, helping to make a staid tale seem fresh and new.

That's how we get around to discussing the recent Netflix mini-series (which may or may not get a second season -- Netflix is playing coy on that front). This refresh of the classic tale comes from Mark Gattis and Steven Moffat, the creators of Sherlock and Jekyll, and those words alone wither made you squeal with delight or cringe in fear. Gattis and Moffat have a certain kind of style to their works: they like to modernize and update their stories, finding interesting and unique twists on the material (usually by dragging it into the modern era to see if our current times give the material a new spin). The problem with their work, and what make so many of their detractors angrily post screeds about this new version of Dracula is that, very often, the creators usually stumble right at the end of their works, letting it fall apart right when it should have become transcendent.

Your mileage with this new Dracula may vary as I felt this series, while among their best in quite some time, still has the same trappings and issues of their other famous projects. When it gets going, Netflix's Dracula is shockingly, amazingly good. But, like every Gattis and Moffat work I've ever seen, the show gets so caught up in itself, so in love with the ideas its playing with, that at a certain point it loses its own thread, its own momentum, and stumbles into a big old self-congratulatory orgy of an ending that satisfies no one other than Gattis and Moffat. I say this with a caveat, up front, because I felt this way after Dracula, that it was so good until is suddenly wasn't, but my wife loved the hell out of it and didn't mind the ending at all. 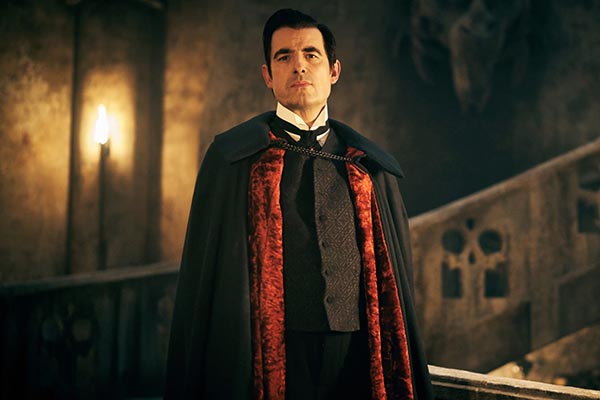 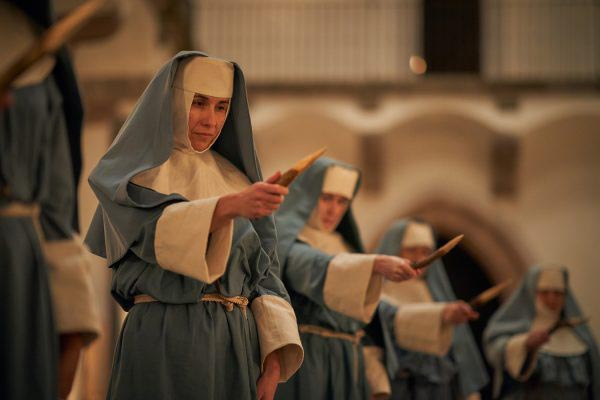 In Dracula, we meet the undead prince of the night like we have in so many other works before: with Mr. Harker coming to the castle to meet with the count to get his signature on some papers so the lord can buy Carfax Abbey and move to England. Things go poorly for poor John, as they so often do in these adaptations, as very quickly the vampire lord starts feeding on the solicitor, using the Englishman's blood to revive his own life and become a young-ish and virile man once again. Johnathan, meanwhile, gets worse and worse until, at the top of the castle, taunted by a resplendent Dracula, John attempts to kill himself, throwing his feeble body off the top of the tallest tower.

He doesn't die but, instead, ends up at an abbey, tended to by nuns. One nun in particular, Sister Agatha, takes an interest in the man, interviewing him to learn about his experiences at Castle Dracula. The sister has a certain interest in the occult and she seems sure that Dracula is a vampire, positive that Johnathan is under the dark lord's sway, and that very soon the Dark Lord will arrive to reclaim his vassal and, in the process, maybe just kill everyone else at the abbey if they don't kill him first. Of course, nothing can ever go as planned with a monster like this on the loose, and carnage ensues. Soon its Agatha against Dracula for a battle of wills to save all of mankind.

What's great about this mini-series is that the above description really only gets into the first episode of the story, with two more still to go. The series takes a part of the book that, often, is used as five minutes of filler in various adaptations before the action skips ahead to England. The show takes its time, finding a compelling story to tell from the cat-and-mouse games of Dracula and Harker (respectively). Almost the entirety of this episode takes place at Castle Dracula and it's the most interesting and engaging version of these events I think I've ever seen. This episode is an absolute knock-out and, best of all, it ends in a place that keeps you watching.

The trick of the series is that this same momentum continues on into the second episode. That's a feat because the entire second story happens at a location very often cast aside and ignored in the various movies: on-board the ship that brings Dracula to England. The concept of spending all this time on a single location, a setting even Bram Stoker skipped over to discuss afterwards via news clippings, seems like it should be a boring mess. Who wants to spend an hour-and-a-half watching people at sea. But then you realize it's basically a locked-room thriller with everyone trapped on board with a killer, and the whole episode suddenly has tension and momentum. This second episode, more than anything else in the series, proves just how interesting this adaptation can be when it really lets loose and tries to find new perspectives on the original novel. 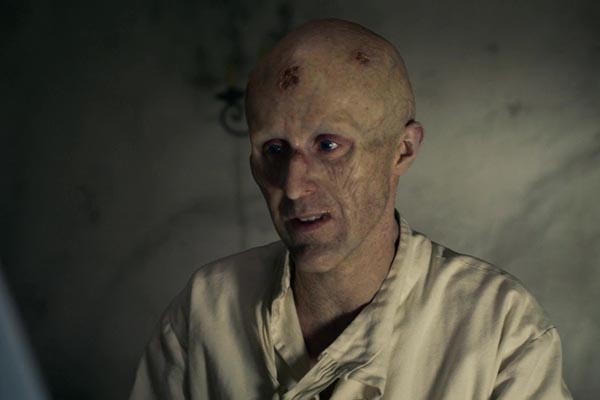 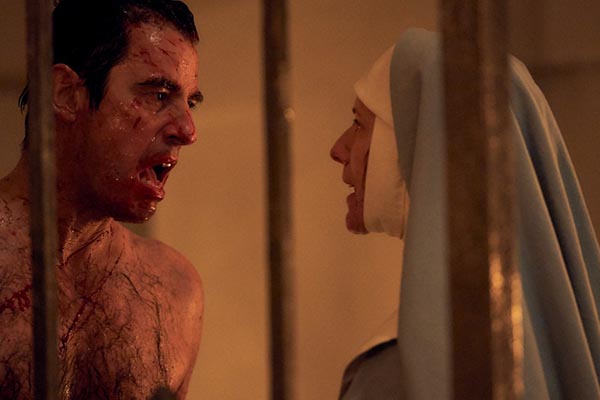 The problem comes about in the third episode. That's because Gattis and Moffat fall into their old patterns. Firstly, the take the story, which was working so well in the lat 19th century, and move it up into thee modern era. Presumably this was done to really push the format of the show. Unfortunately the series has to spend time rebooting itself, taking time to explain the new setting, new characters, and new ideas. It's a false start for the show, essentially, the episode spends far too long spinning its wheels so it can get back up to speed and cruising again.

That wouldn't necessarily be an issue if there was something important the show had to say about Dracula in this modern era. What does it mean to be a vampire in this day an age? What sort of twist is there for a 500-year-old vampire to be here, in this time? If the show had something interesting to say it would have all come together. Mostly, though, Dracula just hangs out on his phone like a vapid teen. Comparing vampires to mean girls probably wasn't what the writers intended but that's basically what they boiled his essence down to. He steals a girl from another guy, drains the life from her, and then mocks everyone around him. Classic mean girl.

Through all this the show has some grand message it wants to say about Dracula. This is what the show has been building to, having Dracula constantly pursued by Sister Agatha in the first two episodes (and then a shadow of her in the third), all so she can figure out what truly makes him tick. I like Agatha and I felt like there was a chance to find some hidden truth about the vampire we'd never seen before. But the show (without spoiling it), totally whiffs this part of the story. It reaches a grand crescendo in terms of cinematography and music and acting but the core truth, the real meat of the story, is missing from the final scenes, leaving the last episode hollow. It's ending could have been great but, frankly, it ends up bad enough it just about ruined it for me. It's not as bad as Dracula 2000 making the vampire into Judas, but I do feel like it's in the same ballpark. The creators suddenly misunderstand the character they've just written about for 4.5 hours and you're left wondering, "how?"

And yet, despite that ending, there's so much to love about this production. The how show feels rich, with gorgeous sets, lush wardrobes, and wonderful cinematography. There's mood and style and substance just pouring out of every frame of this work which, coupled with the superlative performances of leads Bang and Wells, making this one of he most engaging Dracula works I've ever seen. It gets so much right, right up until the last five minutes, that you wish the creators could have just carried it that last couple of yards. Netflix's Dracula is good right with his could have been amazing, and that's just sad.