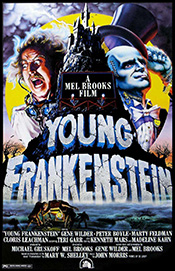 For decades the Frankenstein family experimented on the corpses of the dead, creating foul abominations that terrorized the countryside. Eventually all the family members died off or ran away to find lives elsewhere. Such was the case of young Frederick Frankenstein (pronounced frahnkensteen) who disavowed his family's dark works and took up as a lecturing physician on the human brain. However, as the last surviving member of the Frankenstein name and assets, Frederick inherits everything when the old Baron, his great-grandfather Beaufort Von Frankenstein, dies.

Venturing to Transylvania, Frederick takes command of the castle and soon learns of the dark secrets within. Finding the old Baron's books and notes, as well as his secret lab, the once ashamed Frederick soon goes whole-hog into the family's "great work". But will his creation surpass the disasters of old or just be another lumbering, evil beast?

Designed as a loving parody and tribute to the old Universal Frankenstein movies, Young Frankenstein feels of-a-piece with the classic films. This was, of course, the intent, as the movie was designed specifically to feel like the next in the Universal series (even though it was produced by 20th Century Fox). The producers went so far as the find original props and set dressing from the 1931 Frankenstein to give the film the right verisimilitude.

As a parody, though, the movie had to be more than just a loving, well designed tribute -- it had to be funny. And it is. It's hard not to think of this film as one of director Mel Brook's best works, a movie firing on just about all cylinders. What works best is the "anything for a joke" attitude of the movie, finding jokes from just about anything any anyone, weird gags based on whatever someone thought was funny, and very little mugging meaning just about everyone is the straight man to the antics on screen (well, except for Igor, but we'll get to him in a bit). 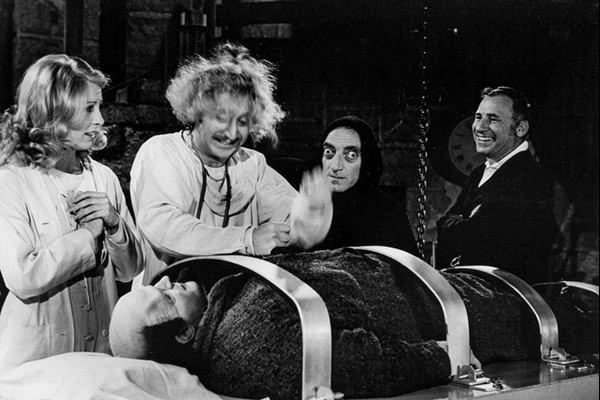 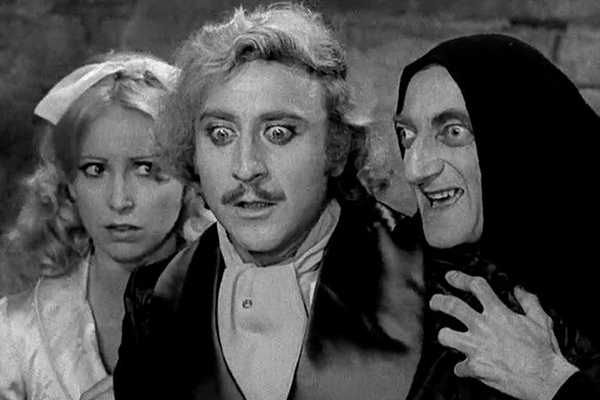 There's a very vaudevillian style to the film, with jokes flying left and right and a plot that's pretty much just simple one-scene sketches stitched together. While that kind of structure wouldn't work in a lot of movies it totally works here, helping to keep the basic Frankenstein plot from dragging down the movie. Sure, the basic story is still the same -- scientist decides to create life, makes a monster, and then the monster goes on a rampage -- but it's how the movie handles those details, and all the weird flights of fancy it finds, that really makes it work. Plus, where else are you going to see the doctor and monster perform a little soft-shoe set to Putting on the Ritz?

The cast of the film is game enough to make all this work. Peter Boyle finds the appropriate wells of sadness and rage required for the monster while, from time to time, acting as a straight-man and foil for the jokes. Madeline Kahn, who isn't one of the main cast members, steals every scene she's in by grace of the fact that she's Madeline Kahn (a performer who could sell even the worst bits and mine deep laughter out of the hoariest jokes). And then there was Marty Feldman as Igor (pronounced Eyegor just to annoy the doctor, but which had the consequence that this reviewer can never read the name "Igor" properly) who is so game for every bit and joke given it's like he's in a different film. He's a mugger, a fourth-wall breaker, and the kind of character that would be distracting (in a bad way) and Feldman wasn't so charismatic in the role. Igor is the best character in the movie all thanks to Feldman.

Weirdly, the one actor that doesn't seem to work is Gene Wilder. It's weird because this is one of his most famous, most popular roles, but I just didn't dig his performance at all. While he starts the movie understated (well, somewhat), he very quickly becomes an over-the-top caricature of the role. Wilder plays the role not just to the back of the theater but to the surround theaters in a 10-mile radius. It's so loud and brash that his Frankenstein just became annoying. I like Gene Wilder a lot but in this role I just felt like he didn't work.

Still, that's one sour note in an other intensely funny, highly quotable film. This is a movie Frankenstein fans will love but, more importantly, it's a Frankenstein film everyone else will enjoy as well.