Although the Castlevania series started off parodying classic horror monsters, its scope eventually broadened out to include creatures of myth and legend. Then, by the time of the Metroidvania games, that scope had broadened even further to include monsters from the Christian (and Jewish) faiths. Demons of Hell, devils from the Divine Tragedy, and creatures of those ilk.

Even by those standards, Adrammelech could be considered a "deep cut" monster. One an an ancient Semitic god, Adrammelech was mentioned in the "book of Kings", the ninth book of the Hebrew Bible, a god of Sepharvaim (of Assyria). The stories told about Adrammelech (and associated deity, the goddess Anammelech) spoke of child sacrifice to these gods, idols of which took the form of "an ass" (as in, a goat).

Of course many of these ancient, "pagan" gods were brought into the Judeo-Christian faith as demons. As detailed in Milton's Paradise Lost, Adrammelech was a fallen angel, vanquished by angels and sent to Hell. He then became a Chancellor of Hell, depicted with a goat head and peacock tail. Only some of this, of course, is represented in his only appearance in the series, where he's a giant goat head (with a bit of his tail revealed as well) embedded in a wall in Carmilla's Castle.

Honestly, this creature is pretty weird and a strange inclusion in the Castlevania series. If you didn't know any better you wouldn't even realize there was a religious connection for this monster; he's just a strange goat-head that attacks you in Chapel Tower. But, as with so much of Castlevania: Circle of the Moon, we will never get any explanation for its inclusions (or broadening of its story) since that game was removed from official continuity. 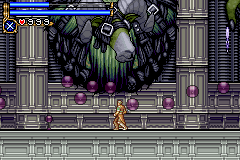 Upon entering Adrammelech's chamber, the player will be greeted by the giant goat head. The whole of the head is the weak point, so finding a spot to attack isn't the problem. However, the goat-demon will constantly attack you with various magic spells, keeping the player on their toes the whole time.

Adrammelech has three attacks he'll launch. The area underneath him will fill with purple bubbles that will hurt hero Nathan Graves if he touches them. However, any attack will destroy the bubbles, so the rotating ice orbs, or the sonic wave DSS attacks are a good way to manage these obstacles. The goat-demon can also summon eight magic orbs that will fire out at Nathan's current position (forcing him to constantly move during this attack. And the beast can cause a curved line of skulled to appear and move across the screen, although running out of the way, or ducking under the hand that summons the skulls will avoid the attack.

In all honesty, the battle against Adrammelech is one of managing space. Since the goat himself doesn't move, and just summons attacks, it's on the player to recognize the attacks and avoid them. Manage your space, and learn the attacks, and the goat-demon will die readily enough.