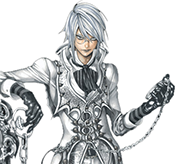 Let's be clear: Castlevania: Judgment is a deeply silly game. It's a fighting game where all the characters are heroes and villains pulled out of time, dressed up in bondage gear, and set to fight each other all so they can defeat a villain whose primary antagonist roles all occured in the Kid Dracula parody games. That's just... that's a lot of weirdness.

At the center of it all sits Aeon, the dues ex machina/main character who creates a time rift so that draws the characters in. He's a Time Watcher, an agent of time whose primary job is to prevent distortions to the flow of reality. Thus, when Galamoth, the villain, decides to wipe Dracula from existence, Aeon has to step in and act. That's his job.

These kinds of characters have been done before, just not in a Castlevania game. There's certainly a trope of the passive watcher that tries to prevent time from changing (but doesn't actually stop any of the evil that's actually, normally supposed to happen). It's hard to say that Castlevania really needed a character like this, but certainly as a conceit for a single game it works out decently well. I guess we should all just be glad the series moved in a different direction after this, otherwise we could have had many more adventures of the Fighting Bondage Time Commandos (not that we at the Inverted Dungeon aren't seriously considering writing fan-fiction all about it). 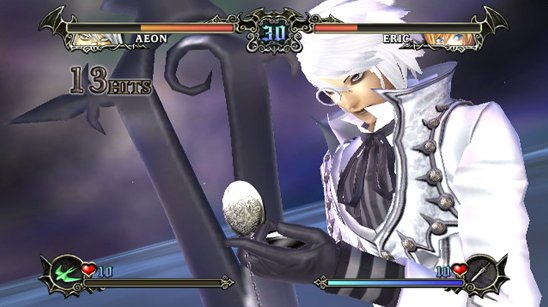 Trained to watch over and protect time, Aeon was an agent of the Time Watchers. His job was to ensure the proper flow of time and prevent any changes that might alter the history of the universe. When he discovered that the evil villain Galamoth was working to change history and remove Dracula from existence (thus enabling Galamoth to be the true villain of history), Aeon knew he had to act quickly.

Unable to change events himself, Aoen knew the only actions he could take had to be outside of the flow of reality. Thus he created a time rift, a zone outside of time where he could interact with great heroes and villains. This would allow him to collect time keys, items he needed to seal off the events Galamoth wanted to change and prevent history from falling. Battling the best combatants of all history, Aeon steadily recovered the keys, gaining the power he needed.

Soon enough Aoen was able to collect the keys and battle with Galamoths lead agent, the Time Reaper. Defeating this strange incarnation of Death, Aeon save the time stream. Thanking the great warriors he had summoned, Aeon placed each of them back in their own time. In the process he sealed the time rift, once again taking his place as a watcher of time.

Although Aeon only ever appeares in this one game, it's entirely possible that another Time Watcher showed up in the series. St. Germain, a strange fellow (who dressed a lot like Aeon), made several appearances at key events during Curse of Darkness. If he had been a Time Watcher, that means that St. Germain was there to ensure that the events he was watching had to happen a certain way. Time must have been fragile during those events, and who knows what might have happened otherwise.

Of course, that's just fan speculation based on the characters' similar outfits. Konami has yet to confirm or deny these rumors.

As a fighter, Aeon was fast and capable. His clock blade had good ranger to it for a melee weapon and could deal decent damage. His greatest asset, though, were his time-based abailities, giving him quite the edge over the other combatants in the game. Powerful and agile, Aeon was one of the tougher warriors to use in the game.