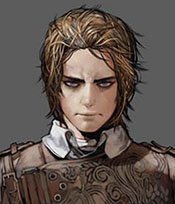 When a Castlevania game was released in the Metroidvania era, it was expected that a secret character would be hidden somewhere in the game. Sometimes it was just one, othertimes it was mutliple characters with full play-modes. So when Castlevania: Order of Ecclesia was announced, it was all but certain that one of the side characters in the story would get their own playable mode.

That character would, of course, be Albus. Like many of the special modes before, Albus's playthrough weas a limited experience, a fun way to see the game again with powerful, if limited, character.

The problem, of course, was that this was all stuff we'd seen before. Like so much of Order of Ecclesia, the play through was just more of the same. But this point the series was seriously running out of steam, and it was hard to care about Albus's game once you were done with the main story.

Albus is an interesting character, and fun to play as, but he arrived too late in the series to truly be cared about (especially once everything effectively went on hiatus). 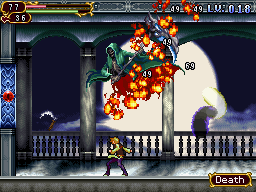 Like his adopted sister, Shanoa, Albus was raised from an early age by the Order of Ecclesia. Trained to be the Order's chief researcher, Albus spent time learning about the magical glyphs Ecclesia use to protect the countryside from evil. Albus spent time researching the glyphs, especially, Dominus, which was tied to Dracula's magic and, reportedly, could prevent the evil vampire lord's resurrection in the future.

When the Order's master, Barlowe, suggested a ceremony to use the Dominus glyph and bind the grave of Dracula, trapping the Dark Lord's soul for all eternity, Albus suspected that not all was as it seemed. He interupted the ceramony, stealing the Dominus glyphs and taking them far away from the Order. Sadly, in the process, his sister Shanoa's memories were wiped away, along her her emotions, leaving her a husk of her former self (a result that Albus dearly regretted).

Fearing what Barlowe might do if the Order regained Dominus, Albus ventured to Wygol village. He knew he had to seal the spell away, but that he also had to prevent the Order from gaining what was within the village: Belmont blood. As he had learned from his studies, the inhabitants of Wygol were Belmont decendants. Knowing the power of that hallowed clan, Albus imprisoned the villagers with the Torpor glyph. He then fled knowing the Order would follow him in pursuit.

And he was right to be worried, as the Order's best warrior, Shanoa, was hot on his tail. She completed quests and freed the villagers, all while Albus could only run and hide. Twice she confronted him and twice instead of fighting her Albus gave up two parts of the Dominus glyph (in part so he could see how she'd react to the power so he could learn more about the evil of Dominus).

Watching from the afterlife, Albus sees Shanoa venture back to the Order to confront Barlowe. The two battle, and Barlowe gives up his life to resurrect Dracula. Albus then watches as Shanoa heads off to Dracula's castle to defeat the vampire lord once and for all. Using the Dominus glyph, Shanoa is able to prevent Dracula's ultimate attack, but the power of the glyph consumes her own life, ensuring both hero and villain die.

At the last moment, though, the soul of Albus appears, giving up his own enternity to save Shanoa. Asking his sister for one last smile, it was revealed that her memories and emotions had returned, too, his sacrifice restoring her to her former glory.

Upon completion of the main game, an alternate mode was unlocked: Albus mode. Here you play as Albus as he explores Romania in his attempt to stop Dracula's resurrection by any means necessary. The mode was very limited, lacking the forces exploration of the opening areas. Instead, Albus started in Wygol (which lacked any villagers at all), and Albus could go off to see the sights and fight evil on his own.

Albus is drastically limited in what he can do in comparison to Shanoa. Lacking full access to the glyphs (as he was unable to absorb and use them), Albus has to reply on a magical gun that could shoot glyph-infused bullets. He also couldn't use the pause menu, preventing him from using equipment and key items he'd collect along the way.

He was able to level up and mick up health and magic powerups, though, which made him not an entirely weak-glass canon. he also had a slick teleport move that could be used (via the touch screen), giving him greater access to the whole of Romania much sooner than Shanoa could. His mode was fun, and varied, but certainly quite difficult.