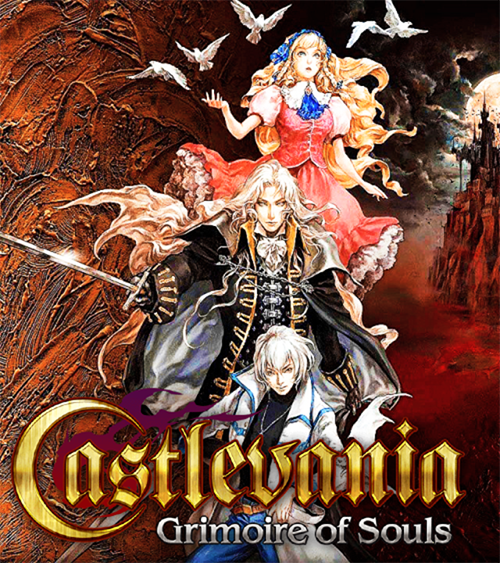 A year after a cult led by Celia Fortner attempted to resurrect Dracula (and, of course, failed), Alucard (continuing to operate under the guise of Genya Arikado) continued his work to prevent the rise of his father, and the evil power associated with the Dark Lord. Receiving a letter addressed to him (under his real name) from one Lucy Westenra of the Elgos Order, Alucard went to meet the woman to discuss grimoires, books of dark and evil power that could, potentially, be used to spread evil and even, just maybe, resurrect Dracula's power.

During the meeting, Lucy reveals the full extent of the power of the grimoires: they can actually suck people into them, transporting them to a very real looking, but still supposedly artificial, version of history. In essence, the books allowed the user to travel backwards in time, but it's like being in a pocket dimension: the actions have consequences, but their actions only affect the book and not actual history... or so the Order thinks. But as Alucard travels through the books, seeking to seal away their power and stop Death (who has also discovered the power of the tomes) and other minions of Dracula from claiming the power for their dark ruler, the books slowly started to bleed their effects out into the real timeline.

The first of the tomes dropped Alucard on the edge of Dracula's Castle in the time of Simon Belmont (circa 1691 AD). There Alucard came face-to-face with Death but, because the book had stolen away Alucard's power, reverting him to a form closer in power to this time and place, Death was handily able to defeat him. After taunting the hero, Death flew off to secure the power of the book.

Lucy pulled Alucard out and reasoned that the only way he could defeat Death (and any other creatures lurking in the books) was if he had help. So she manifested heroes from the tomes, with Simon Belmont being the first, followed by Charlotte Aulin and Maria Renard as well, to help flesh out a party and give everyone a fighting chance. They then went into the book, confronting the Giant Bat lurking at the end of the tome, securing the dark soul the Bat was protecting and preventing Death from gaining this power.

Next, Lucy sent the heroes into the era of the evil Brauner (circa 1944 AD). To aid the heroes Lucy summoned Shanoa and, at the behest of Charlotte, tried to summon Johnathan Morris. Unfortunately, something has gone wrong with the book, almost like was actively rewriting itself. It seemed that the dark power of the tome was controlling history and actually actively trying to delete heroes, and their adventures, from the timeline (since if the heroes don't complete their quest, Dracula doesn't die in that era).

Banding together, the heroes fought through Brauner's version of Dracula's Castle (and the dangers within), eventually coming face to face with the wicked Dullahan. A pitched battle ensued that, in the end, lead the heroes to collect their second grimoire soul. Johnathan was saved but, due to the changes to history within the tome, he was unable to use his full power, left only to assist the other heroes on their quest to prevent the rise of the dark magics.

Following this, the heroes ventured into the book of the era of Richter Belmont (circa 1792 AD). Here the powers of the book were once again attempting to rewrite history, this time to remove Richter from existence. This deeply affected Maria, causing her to begin fading away as well. The united heroes had to venture through this time period to take on the Wyvern at the end of the tome and steal away it's dark soul as well. This saved the heroes but, as with Johnathan. Richter was weakened by the corruption in the book and was only able to assist the rest of the team for short periods of time.

The next era the heroes ventured into was actually that of Alucard's own attack on Castle Dracula (circa 1797 AD). Here the heroes ventured deep under the castle, through the caverns and cemetery, to take on the dangers within. While in the castle underground they ran across a second version of Maria, this time the adult form that Alucard once had a "romantic" connection (of a sort). The book, though, sought to delete her, too, and the heroes had to prevent this. Battling through to the undead demon Legion, the heroes took on this new foe for the sake of their friend and companion. The beast defeated, the heroes gained the dark soul within...

But then Soma Cruz -- a hero Alucard recognized even if he was a new face to everyone else -- arrived and seemingly attempted to steal the soul from the heroes. A pitched battle ensued before Soma eventually retreated, whisked away by a new woman, Hermina. Apparently Hermina was once a member of the Order of Elgos and she was the one that figured out how to enter the tomes and use their powers. She left the Order and stole several of the grimoires for reasons, at the time, were unclear. Worse, she just might have been the source of the corruption in the grimoires.

Already reeling from this new development, the heroes were then sent into a tome to deal with the events of the Order of Ecclesia (circa 1810 AD). Here the heroes had to confront a couple of problems. First, Shanoa began to fade under the rewriting onslaught of the book. Battling their way through the barracks of the Castle, the heroes ran up against the demon horse Eligor. They had to defeat this beast to secure its soul, but even then that wasn't not the end of their troubles as soon after they save this time period, Richter and Maria began to fade once again. The heroes realized that had to venture back to 1792 AD to once again see what's going on in that era.

Thankfully, to aid them in their increasingly complex quest, Lucy summoned Albus, Shanoa's brother-in-arms, to aid in the fight. It was hoped that with his aid, and with the revisit of the previous time period, the heroes could finally get a handle on what was going on and secure a solution to the increasing troubles along the timeline.

Back in 1792 the heroes had to chase down the evil countess Carmilla. The changes to the timeline allowed Carmilla to capture and possess the fair Annette, Richter's love. Richter and Maria were fading and the other heroes had to step up to defeat Carmilla and save Annette before this portion of the timeline was inextricably destroyed. Thankfully the heroes were able to act in time, defeating the vampiress and withdrawing her evil magic from the young woman.

Returned to the present, it was revealed that Hermina was not the villain of the story but, instead, the one working behind the scenes to stop the rise of Dracula. As she told them, the Order of Elgos was created by the real-world Death, under his guise as Seward, to claim the tomes and use their power to rewrite the timeline. Without Hermina stealing parts of the Grimoire and stopping Death's work the tomes would have fallen and the whole timeline would have been changed, from 1476 onwards. Dracula's first defeat would have been erased and he would have reigned this whole time, for 600 years.

The only problem was that Soma, aided by Hermina, wasn't strong enough to control the dark magics of the vital souls in the grimoires. He could absorb them, attempting to control them, but that dark magic spread and corrupted him, turning him into the Dark King Soma, the very demon he feared he could become. With the power in his hands he fled into the books to ensure his own power. This forced the heroes to venture into 1797, during a time when the Belmont power was corrupted by Death and Shaft. Battling through the castle of that era, the heroes worked to take out this manifestation of Death, reducing his power in the grimoire and weakening his hold of the magic. The Dark King Soma, though, only grew stronger, feeding on the power of the vital souls.

This forced the heroes to venture into two periods of Soma's own life, 2035 AD and 2036 AD, revisiting his adventures. As they traveled through these periods they devised a plan to battle the Dark King Soma and free his soul from the darkness. With the Aurora spell the magic casters tapped into the power of the Eclipse to free Soma from the dark magic, purifying him. Unfortunately Death arrived, stealing way the vital soul magic so he could enact his plan, fleeing to 1476 AD, via the grimoire, to bring back the Dark Lord. It was time for the heroes to go into the end game and save the day.

Traveling into the grimoire for 1476 AD, though, wasn't as easy as with the other eras. This was the oldest grimoire and to get into it one needed powerful magic. Richter suggested the power of the Vampire Killer, via the whip's memory, and Hermina revealed that she, as a member of the Lecarde clan, could tap into that memory and resurrect Trevor Belmont. With Trevor's aid the heroes were able to travel back into 1476 AD and, eventually take on Dracula. The vampire, though, was no easy battle as he had been enhanced by the dark magic of the vital souls. They battled hard, fighting against the Dark Lord, but when his first form was defeated he absorbed Death's soul, transforming into a combined demon of immense power. This battle was truly difficult, leaving the heroes near the brink of death, but in the end the vampire king was defeated and the timeline was preserved, saving all of humanity once and for all.

Unlike other stories in the series, Grimoire of Souls doesn't have a single, linear tale to it. Instead it functioned kind of like Castlevania: Harmony of Despair with the addition of a thin layer of story attached. The game was designed for players to go into stages (based on various eras from Castlevania history) and play these areas over and over again, grinding for gear . There was a story to the game, as recounted above, but it was thin and served more as a veneer to introduce the various stages and get the players motivated.

We use the date of 2037 AD for this game as it's ostensibly supposed to happen after the events of events of Castlevania: Dawn of Sorrow (circa 2036 AD), but until an official timeline is released incorporating this game into the series we'll just have to go with our best guess for placement.