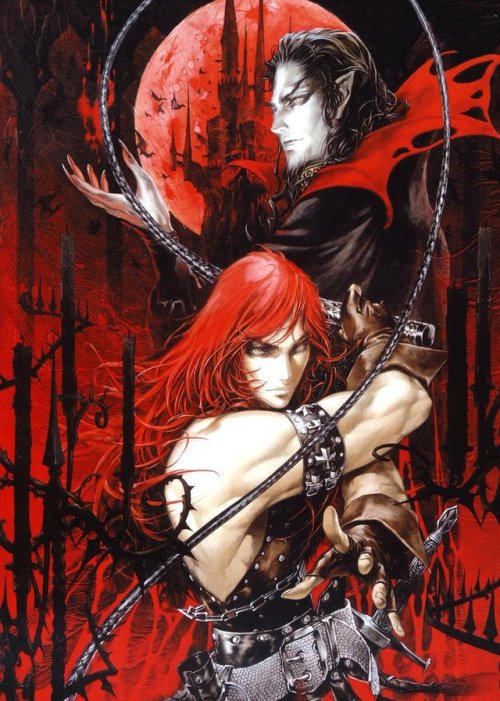 It had been 100 years since Dracula had been defeated by the hands (and whip) of Christopher Belmont (ignore Order of Shadows for this setup). The townspeople had grown more secure in their lands, happy in the relative peace of their world, safe in the knowledge that Dracula was dead and buried forever. All that, though, was sadly about to change.

The followers of Dracula, performing a "Black Mass Ritual" (as seen in the official, in-continuity remake for the Sharp X68000 computer system), attempted to bring Dracula back from the grave. Their ritual, performed on the same day as the town's Easter services, used the magic of the day, perverting it for their dark purposes. No Easter baskets would be handed out that day, instead the lands would have new and terrible demonic surprises rolling out from the newly reappeared castle at the top of the Borgo Pass.

On that day, Dracula was resurrected, once again casting his dark shadow (not to be confused with the TV series) over the lands on Romania. In those dark times only one person could be called upon to go to the dark castle and defeat the demon Lord at the top: a Belmont, one o the clan of vampire hunters who had, time and again, destroyed the Prince of Darkness. This time the duty fell to Simon Belmont, heir to the clan and bearer of the famed Vampire Killer. It was his job to enter Dracula's demon-infested lands and defeat the evil within.

Simon, entering the castle, waged holy war on the fiends and demons that roamed its dark and dusty halls. Battling past the worst beasts, such as the Giant Bat, Medusa, Frankenstein's Creature, Mummies, and the Grim Reaper, his journey took him through bowels of the castle, deep into caverns and out through the broken ramparts. Simon fought to the top of the keep where he faced off with the demon Lord himself: Dracula.

As hero and villain battled, their war waged hard. Simon proved a formidable threat, so Dracula had to unleash his full power. The vampire revealed his true, demonic form, and Simon battled back, going blow-for-blow with the vampiric demon. He defeated the demonic entity, sealing the beast to the grave and releasing the castle's magic. As the dark magic washed out of the castle, Simon fled to a nearby overlook, able to watch as the castle crumbled into rock and dust. The land was released (for a time), and the villagers thought they would be able to live in peace again.

Castlevania was remade multiple times, for multiple systems. The two most noteworthy remakes though were Vampire Killer and Castlevania for the Sharp X68000 computer system (which was itself remade again for the Sony PlayStation under the name Castlevania Chronicles). Vampire Killer was noteworthy as it implemented an adventure style game mechanic where-by Simon had to explore the castle, searching for keys to unlock doors. The game play would go on to influence sequel Castlevania II as well as being a precursor of the whole Metroidvania movement in modern Castlevania games.

Meanwhile, Castlevania for the X68000 (often referred to simply as Castlevania X68000 or Castlevania X68k) would introduce the concept of the "Black Mass Ritual", where-by Dracula's followers could resurrect the demon via a sacrifice. This helped to flesh out the story of the original game, which was rather threadbare (as many of the early NES games were). Over time more story would get added to this concept, introducing the various ways Dracula could be resurrected, always with its own consequences.

Interestingly, the original game was thought of as a parody of the classic Universal Studios monster movies from the 1930s, 1940s, and 1950s. Many of the monsters from the classics appear (not just Dracula, but also Frankie, and the Creature from the Black Lagoon in the guise of the lowly Merman). Other games would feature more of the monsters, giving a wider connection to their forebears. Even upon defeating the game, the parody continued, with many of the monsters being "played" by humorously named actors, references to the actors from the original movies such as Frankie being played by "Boris Karloffice" and Death being played by "Belo Lugosi". Dracula was played by "Christoper Bee" who was a reference to Christopher Lee, the actor who played Dracula in the Hammer Studios film series (also classics).

One more game in the Castlevania series is considered to be a "remake" of the original Castlevania: Haunted Castle. Haunted Castle was an Arcade game released shortly after the original Castlevania came out. The game stars an unnamed leather skirt wearing, whip wielding vampire killer on a quest to invade Dracula's castle to defeat the evil vampire and save the vampire hunter's lady love (who Dracula kidnapped in the opening of the game). Although Simon is never referenced by name, it's always been assumed the hero is Simon.

In many ways Haunted Castle plays like an arcade remake of the original Castlevania game. Our hero has to traverse six stages (both games have six stages) through Dracula's castle, including the outer grounds, caverns, inner halls, dungeons, clock towers, and a final bridge to the demon's keep. The same monsters show up in both games, including not just Dracula but Frankenstein's Creature and Medusa. As was eventually explained, what happened was that the team working on Haunted Castle hit a bit of a wall during development and Konami elected to bring in members of the original Castlevania team to work on the title, eventually bringing in ideas from the main series to make a game that felt much more like a "proper" Castlevania than what was originally envisioned.

Of course, we would also be remiss if we didn't at least mention Super Castlevania IV. Although that game was always envisioned as a remake of the original Castlevania, in the West it was billed as a third adventure for hero Simon. The two regions had their own divergent timelines with the game slotted in differently depending on area of release. Eventually a worldwide timeline was released, with Super Castlevania IV being placed as a remake of Castlevania. That said, as this site is a Western fan-site for the series, we continue to acknowledge the game's nebulous place in the timeline.