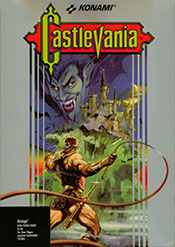 When the first Castlevania game out it proved to be immensely popular (we wouldn't be taling about its long and varies series on the site if it hadn't). That first game, along with all its sequels, had many, many remakes. Among them, one that stands out is the version created for IBM-compatible PCs running DOS. It stands out, though due to its sheer awfulness.

The DOS version of Castlevania, at first blush, appears much like other versions of the game. That first impression, though, quickly fades aay once the game starts running. Although most of the graphics made the transition more or less intact, many of the sprites have been subtly recolored (likely to make use of the more limited pallete of older screens and video cards). Simon standards out as an aggregious example, looking like an albino wearing a bad brown wig -- he's so pale, the light must gleam off him. The rest of the sprites look fairly okay, with few other stand out examples of bad graphics, but there are other issues with the visual experience, namely how badly the graphics keep up with the whole experience.

For whatever reason the game is programmed with a stutter. Unlimited Software (the company behind this port as well as the Commodore 64 version) seemed unable to reproduce the smooth screen scrolling of the original game, so did the best they could, which was awful. The screen jerks every time Simon moves giving a hard-to-watch stutter to everything. I don't have any visual issues and this port was giving me a headache from the stuttering.

Although maybe that headache was caused by the god-awful music. Allegedly if you can get this game to play with a compatible soundcard (good luck with that in this modern era, since who know what it needed anymore) the game has actual good music (or at least more tolerable). For the rest of us, though, all the music is going to come out of whatever hardware is available (potentially the PC speaker) and it will sound terrible -- single-channel and super-plinky. The worst part, though, is that the sound effects overrule the music, so you barely hear the tracks at all. It's just the same three or so sound effects for killing monsters, picking up items, and using weapons, with occasional snippets of the music coming though. It's an aggrivating experience.

On it's own, barring all the above listed issues, the game plays okay. It moves slower than normal Castlevania, and for this reviewer the game didn't feel as responsive as it should. Everything seemed to take a moment to follow my commands, leading me to take hits when it seemed like I should have avoided them (and since I already am terrible at the NES version, I didn't need a steeper learning curve).

Needless to say, the DOS version of Castlevania is an absolute skip. I find it hard to recommend anyone suffering through this game -- there's nothing enjoyable about the experience, and in this modern era where you can get Castlevania on just about any console in a perfect emualted port, why bother with this inferior version?