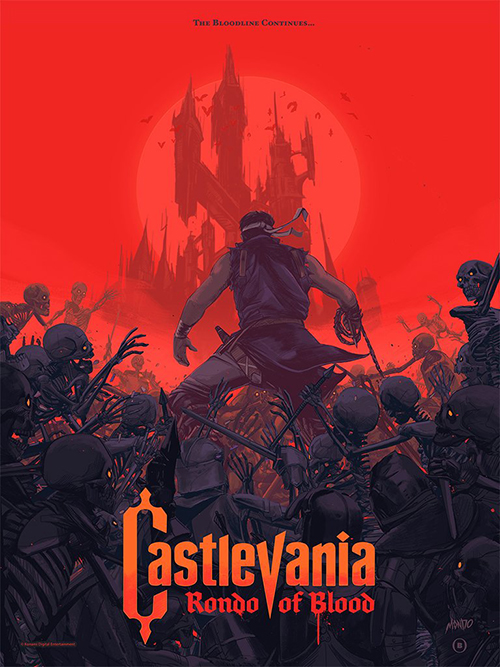 In the 100 years since Simon Belmont defeated Dracula, it seemed as though the evil demon's soul had been laid to rest, that the countryside of Romania could recover. There were rumors that Simon had ventured out and destroyed the body for good, with whatever residual dark energies getting wiped away by the ritual Simon had performed. Sure, perhaps there had been a tale of Simon's grandson, Juste Belmont, also battling against some dark evil 50 years later, but the countryside had enjoyed relative peace for nearly a century. The world was safe.

But then, on the eve of the 100 year anniversary of the death of the Dark Prince, Dracula's presence once again flowed across the lands. The dark priest Shaft (yo damn right -- we at the Inverted Dungeon do not apologize for the necessary Shaft jokes), a devoted follower of Dracula, brought together the evil demon's minions and put forth a ceremony, the requisite Black Mass Ritual, to summon the soul of the demon and bring forth Dracula once more.

His feet once more on native soil, Dracula quickly launched a new scheme with Shaft. It wasn't enough just to wait for a hero to come to the castle, oh no, instead they had to try and find leverage over the countryside, to make anyone afraid to even think to approach the castle out of fear for what Dracula might do. Thus, the minions of Dracula went out into the villages around Romania and kidnapped four girls -- Iris, Tera, Maria , and Annette, the latter of whom was the betrothed of current Belmont heir, and keeper of the Vampire Killer, Richter Belmont.

Richter was, understandably, enraged at this action. Whatever Dracula might have hoped, whether to keep Richter away at the fear of what would happen to Annette if the hero interfered, or maybe to cause him to come to the castle half-cocked and liable to make mistakes, all it did was ensure that Richter came armed and ready for battle. Taking up the family's whip, Richter charged into Dracula's lands to save the day (and the life of his beloved). Along the way he found the three other missing girls, including Maria. While two of the girls provided aid (and key items) needed to aid in Richter's quest, it was Maria Renard who joined up with the hero, providing her own skill in battle (and the ability to summon deadly animals) as a means to help ensure Annette was found and Dracula was stopped.

As they battled through the castle and its surrounding grounds, the duo fought many of the evil creatures that always plagued the lands of Romania, including the dark countess Carmilla, The Grim Reaper, and eventually the dark priest Shaft. The heroes found Annette near the top of the towers of Dracula's castle, saving her from the fate Dracula had planned for her: to turn her into one of his demonic brides so that she could kill Richter (who had to pay for meddling in the vampire's plans).

That left only one foe left to tackle: Dracula himself. As they reached the final throne room within the Castle Keep, Dracula taunted at the hero, laughing at the "fool's" expectation to win the day. Then he launched his attack, coming at the heroes with everything he had in his dark and magics repertoire. That battle raged on, but in the end it was Richter and Maria who stood victorious while Dracula lay defeated at their feet. The castle, symbol of the Dark Prince's power, crumbled to the ground once more, with the vampire's soul committed to its own dark hell once again (at least for a little while).

For Konami it was a bit of a struggle to bring Richter's story to the U.S. The original version of the title, Castlevania Dracula X: Rondo of Blood, was released on the PC Engine CD back in 1993, a system that came to the U.S. as the TurboGraphix 16 CD. While the PC Engine was relatively popular in Japan, the system's TurboGraphix analogue failed to catch fire in the U.S., and it's CD attachment fared even worse. This was exacerbated by the company, NEC of America, showing little interest in bringing "niche" titles to the U.S. This left Dracula X out in the cold, unable to be released on the system and, even if it had been, it was unlikely to be a success.

So, instead, Konami ported the game to the SNES as Castlevania: Dracula X. This version of the game, though, exists in a kind of side continuity. Two of the girls Richter was supposed to rescue, Iris and Tera, were omitted, Annette was made into Maria's sister, and Maria lacked her full play mode where she could fight alongside Richter. For anyone that knew the original version of the game, this "remake" was a major let down, but even for people who only had this version, the game felt like a step down from the previous title, Super Castlevania IV, and the game was a failure in the U.S.

It wasn't until 14 years, in fact, that a proper version of the game was finally released in the U.S. Published on the PlayStation Portable, Castlevania: The Dracula X Chronicles, featured an enhanced, 2.5D graphical style along with a (more than) restored story and once more had Maria as a playable character. It also featured, in unlockable form the original game along with sequel Symphony of the Night. Although many Americans had imported the original game (for a hefty price), this release allowed everyone a chance to play the game (finally!).

To note, although The Dracula X Chronicles purports itself to be the complete collection of Dracula X games, the SNES remake was not included in the package. It's a solid release otherwise, but this is a notable whole in its "complete collection" branding.