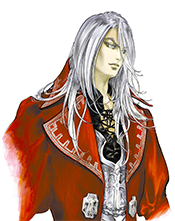 It's hard to talk about any games or hero in the Castlevania series without eventually touching upon Alucard and Castlevania: Symphony of the Night. Once Symphony came out, every game after was compared to the seminal title, fairly or not. This was especially true once Konami doubled-down on the Metroidvania aspects of the series and began releasing (seemingly) nothing but Symphony-clones.

What does this have to do with Juste Belmont? His game, Castlevania: Harmony of Dissonance, was the second attempt at recapturing the magic of Symphony. The first attempt, the prior year's Castlevania: Circle of the Moon, was about as different as a game could get from Symphony while still being a recognizable part of the sub-genre. The hero, Nathan Graves, was a whip wielder who explored a single, very difficult castle that wasn't, specifically, Dracula's castle. Plus the graphics were kind of dark and it didn't have Alucard in it. Many fans weren't that interested in what Circle had to offer.

Thus, the next year, Konami came out with what can only be viewed as a course correction. With series director IGA firmly in charge the series leaned hard into making the next game, Harmony, as much like Symphony as they could. Juste, heir to the Belmont and Belnades lineages, is sucked into an adventure at Dracula's castle (not some off-shoot) where he has to explore not just one version of the castle but two of them (much like Symphony) all while trying to free another vampire hunter (his friend, Maxim Kischine, in shades of alucard and Richter in Symphony) from the dark magics of the castle. Hell, just having the hero be heir to both the Belmonts and Belnades clans evokes Castlevania III for another Alucard connection.

The gambit did seem to play off, though. With Harmony Konami got a game the fans embraced more fully (even if we at the Inverted Dungeon were only luke warm to it, but then Konami rarely ever asks for our opinion on matters) and the game settled into the genre that would define it for years to come.

As a member of the Belmont clan Juste was raised from an early age knowing he would one day become a protector of Romania, a master of the legendary Vampire Killer whip. Gifted with natural prowess as a Belmont, Juste also inherited vast magical abilities from the Belnades clan (as passed down the line for generations when Sypha Belnades married Trevor Belmont after their adventure together in Castlevania III, although for some reason Juste was the only hero to ever show these powers). Considered by many in the clan to be the most powerful Belmont warrior yet, Juste knew he'd be the one to handle any trouble that came out of the dark recesses of Dracula's lands.

Training for years, Juste made friends with another would-be vampire hunter, Maxim Kinshe. The two developed a friendly rivalry, each believing themselves to be the one that would save the land from Dracula (when he inevitably appeared next). They both also struck up a friendship with another young girl in their village, Lydie Erlanger, a fair maiden that Juste eventually developed some stronger feelings for.

Two years prior to the events of the game Maxim took off to train by himself. Juste didn't hear from his friend in the intervening time until the vampire showed up, injured and barely remembering anything, ranting about how Lydie had been kidnapped by a dark fiend and taken to the resurrected Dracula's castle. The two ventured in only for Maxim to run off leaving Juste alone to explore the dark depths. What the young Belmont discovered was that Dracula's castle was dimensionally fractured -- there were two versions of it and, to fully rid the land of the evil infesting it, Juste had to explore both of them.

Still, even that discovery wasn't as startling as what had happened to his friend, Maxim. During the rogue vampire hunter's time abroad he attempted to resurrect and defeat Dracula by collecting Dracula's five body parts (as per Castlevania II: Simon's Quest). Unfortunately for Maxim Dracula's dark magics infected him, spliting the vampire hunter's soul in two. The dark half kidnapped Lydie, dragging her to the castle while the light half was left half-coherent. Juste had to free his friend's soul from Dracula's magic but in the process he ended up resurrecting the soul of Dracula, a malevolent spectre the embodied all of the evil vampire terrifying power.

Thankfully Juste was more than up to the task (remember, he won the Most Power Belmont competition three years running). After a fiercely pitched battle Juste came out victorious. Fleeing the castle with his friends in tow, the three stood outside as the castle crumbled safe in the knowledge that it would be some time until Dracula came back from the grave again (you know, unless Maxim was an idiot).

With Harmony Konami really honed what made their Metroidvania games tick, including huge castles, bishonen girly-men (with long flowing hair, place skin, and a cool glow when they walked, all just like Alucard), multiple endings, and additional alternate modes of play after the main game was complete. Despite being a Belmont, Juste is one of the most Alucard-like heroes the series ever produced in style and form -- with his long white hair and flowing, cape-like coat, Juste doesn't rememble the Belmonts that came before him. Instead he just looks like an Alucard fanboy (which, let's be honest, we all are just a little). Considering later entries in the series (like Lament of Innocence and Aria of Sorrow, this was a trend Konami would never really escape.

Like most Belmonts, Juste's primary attacks are via his trusty whip, the Vampire Killer, and the usual assortment of sub-weapons. What sets Juste apart from your average whip-wielder, though, is his ability to infuse the sub-weapon he's carrying with the magic of one of five tomes. Four of these books (Fire, Ice, Bolt, and Wind) can create powerful fusion attacks that act, in form and substance, not unlike the item crashes Richter Belmont and Nathan Graves could perform (that later of which required magic cards to enable while the former just used sheer manliness). The final tome, Summoning, allowed Juste to summon (of course) spirit animals to aid (again, not unlike Nathan). While the system as a whole was interesting, the fewer combinations and specificity of focus made the Spell Fustion system (as the game called it) feel like a pale imitation of Nathan's vastly more versatile Dual-Setup System.

But, hey, at least Juste looked and moved like Alucard. He had that going for him, right?