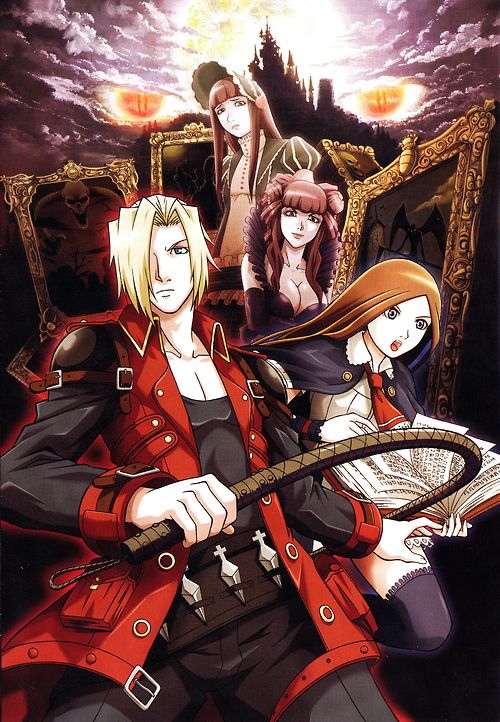 When darkness and death spread across the land, the powers of evil thrive. As with the Great War making the world ripe for the rise of Dracula (in 1917 AD, the events of Castlevania: Bloodlines), so too did the Second World War give Dracula a chance to return once again.

When Dracula's castle appeared in its usual location, two friends, Johnathan Morris (son of John Morris, heir to the Morris clan, and keeper of the Vampire Killer) and Charlotte Aulin (heir to the Belnades clan and sorceress in her own right) met at the dread demon castle to return the foul demon to his grave. What they found, though, was a castle not under the control of Dracula but the master vampire Brauner.

Brauner, who styled himself as not only the rightful lord of Dracula's power and castle (along with being something of a painter), had moved into the demon abode with his two daughters, Stella and Loretta. The vampires planned to use the power of the demon castle to spread darkness across the world and rule on their own. Dracula wasn't even a blip for them, hardly a footnote in their grand scheme for world domination.

Johnathan and Charlotte explored the castle, encountering allies like a priest, Vincent Dorin, and the ghostly merchant, Wind. Wind aided Johnathan in his quest, helping the kid deal with the death of his father, John. The Vampire Killer, the family's whip and aid in defeating Dracula time and again, was the cause of John's death. John was unable to use the whip fully without damaging himself, and destroying Dracula eventually also destroyed John.

The two heroes also discovered paintings that acted as portals to other worlds and served as power bases for Brauner's evil plans. Upon entering these portals, the heroes are were forced to defeat the evil within, a guardian of each of the pocket dimensions, as a way to cut off Brauner's power and weaken the vampire's hold on the castle. Four such paintings existed, leading the heroes so such locales as Victorian England, Ancient Egypt, and a strange, circus-themed realm of chaos and wonder.

In time, the duo of Johnathan and Charlotte explored enough of the castle and collected enough clues to discover that Wind was actually Eric Lecarde (the other hero from the previous assault on Dracula). Worse, Stella and Loretta were actually Eric's daughters, turned into vampires and brainwashed into believing they were Brauner's own daughters. Charlotte, thankfully, learned the powerful holy spell Sanctuary which could cure vampirism in its intended targets and grant new life. The two heroes eventually confronted the vampire sisters and with Charlotte's magic freed the girls from their evil and Brauner's hold.

From there, the sisters aided Johnathan in gaining full use of the Vampire Killer whip (via a battle with the whip's own memory, given shape as Richter Belmont). Filled with power, the two heroes then broke through further worlds, clearing each in turn, all to reveal Brauner's own workshop. Within they drove back the evil vampire, but it's was Dracula's minion Death, the soul collector who was a presence in every iteration of the castle, who dealt the killing blow. Death had believed Brauner was working to resurrect Dracula, and once he discovered that the vampire was not working with him, Death took his terrible revenge.

It was Brauner's death that brought about Dracula's true resurrection. Teaming together, Dracula and Death went toe-to-toe with Johnathan and Charlotte. Once the tide of battle turned, Death gave his own energy to bring Dracula's truest demonic form to life. It was only through a final push that the heroes were able to defeat Dracula and send the demon once again back to the realm where his spirit lurked in death.

Job well done, the heroes fled the castle before it crumbled. With his daughters freed of the magic of the castle (and undeath, of course), Eric was able to leave this world for the peace of the afterlife. The demon had been put in the ground and the countryside was saved once again (except for that pesky war Second World War).

Castlevania: Portrait of Ruin features an interesting play style (a style unlike most other games in the series). As the player you have direct control over both Charlotte and Johnathan at the same time. Both characters can appear on screen and can team up for various moves. Each has different powers, attacks, and strengths, so playing to both sets of skills is necessary to clear the game.

One of the major plot points is the death of John Morris, a death caused by John's inability to use the Vampire Killer whip safely (using the true power without being a Belmont will, apparently, kill you over time). Johnathan Morris, his son, is wracked with guilt over the death of his father and fear of the whip and what it will do to him (he's honestly rather whiny for much of the game and not a very engaging hero). To gain full power over the whip, Johnathan has to fight the Whip's Memory (a battle he has to do on his own, without the help of Charlotte). The Whip's Memory, to note, is Richter Belmont, marking another game where that vampire hunter shows up (giving Simon a run for his money).

Of course, the other major plot point is that Wind is actually Eric Lecarde, and that his daughters, Stella and Loretta, have become brainwashed vamp-slaves on Brauner. To free then, Charlotte learns the Sanctuary spell and casts it on the two girls. Sanctuary cures the intended targets of vampirism... and yet no one thinks to try it on Dracula. Far be it from us to tell Konami how to write its game series (they stopped returning our calls and took out a restraining order the last time we tried), but it seems to us that a spell that can cure vampirism should be able to work on any vampire, not just the ones the writers conveniently think it should work on.

Bonus modes can be unlocked (as is par for the course in the series now). Stella and Loretta can be unlocked, showcasing their early adventure (you can play through the whole castle with them using the touchscreen to control their magics). Richter and Maria can also be unlocked, although their adventure is totally non-cannon.