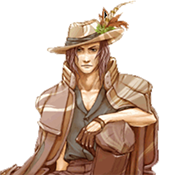 As weird at it was for Konami (in their infinite wisdom) to tie the plotline of Bram Stoker's novel Dracula into the Castlevania series, what was even stranger was how they did so. While, in retrosoect, the book itself was pretty bog-standard vampire stuff (largely because this book defined the genre and everything that came before it), Konami and to try and graft the Dracula story on their own bog-standard storytelling style. That mean that the hero had to go to a castle and fight all kinds of monsters this despite the fact that the only monsters to ever show up in the original book were vampires (and only the titualar vampire does so with any prominence).

But hey, fine, if they wanted to combine stuff a bit, that was great. It got really weird, though, when they then introduced a couple of new heroes, one of whom wasn't even tied into the book in question to begin with, and then introduced a non-Dracula (non-vampire wife) villain for them to deal with as well (who, again, wasn't part of the original book). At a certain point one had to question why Konami even bothered to try and tied the game into the novel to begin with.

Still, for all the weird ideas thrown around in the creation of this game, Konami did have one really solid idea: Eric Lecarde, second hero of Castlevania Bloodlines and owner of a fabulous whip and even more fabulous hair. Whatever else may have been poorly thought out about the game, Eric Lecarde had a mane to die for.

As noted, Eric Lecarde wasn't connected to Bram Stoker's original novel -- he wasn't based on any character or tied awkwardly into the story of one of the character's from the story (unlike his companion, John Morris). As such, reasoning had to be devised as to why Eric would want to go fight Dracula (lacking the father-son revenge dynamic of John-boy). Of course, his history was then updated later because Konami finds it impossible to ever leave well enough alone.

Thus, as eventually established, the Lecarde clan were entrusted with the Alucard Spear (originally just called the Alcarde Spear in Bloodlines before all the retconning of the story happened), a powerful weapon created by Alucard (who apparently then felt like he had to afix his name to it) to aid and compliment the Vampire Killer, famed whip of the Belmont clan. The spear was the passed down through the generations, much like the Vampire Killer, and would be used to battle Dracula in times of need. Thus, because of their connections through their weaponry, the Lecarde Clan and the Morris Clan (who guarded the Vampire Killer) became allies and friends.

After a young John Morris saw his father, Quincey, killed at the hands of Dracula (although the vampire was defeated by the vampire hunter at the same time), he picked up the whip and swore to train to become the best vampire hunter he could. He and Eric grew up together, training with their weapons should the evil vampire ever return to the Earth. 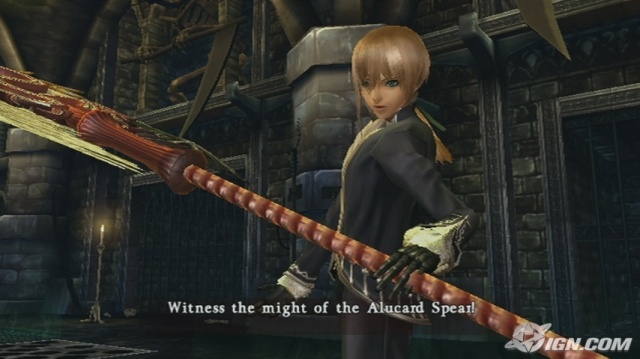 A few years later, when Eric was a pre-teen, a time rift opened, sucking the spear-wielder inside. As Eric soon discovered, an ancient evil from the distant future, Galamoth, was attempting to rewrite history and rule the world. Like many of the other heroes within the rift, Eric felt it was his duty to attempt to defeat Galamoth and save the world.

However, Eric also had personal reasons for joining the battle in the rift. From a young age he felt like he had to prove himself to others, that somehow his mastery of the famed Alucard Spear was ever in doubt. He used the battles to showcase his skills to the other vampire hunters there, including Alucard, proving that he could be the best warrior with the spear ever.

Thankfully, Galamoth was defeated by the combined might of the heroes. Eric went home assured that, yes, he was a master of his chosen weapon and that his capabilities as a vampire hunter were never in doubt.

Much later on, the two vampire hunters, Eric and John, had moved on with their lives. Eric had fallen in love with a woman, Gwendolyn, and then two were planning a long, idyllic life together. Sadly (as so often happens in Castlevania games), Eric's love was killed and turned into a vampire (seriously, Konami, what's with killing every female love interest?). This was done by the evil Countess Bartley, demonic vampiress and niece of Dracula (even though it's never shown in the Castlevania series that Dracula has any family other than Alucard and, sigh, a dead wife).

Well, that was all the motivation Eric needed. Teamed up with his lifelong friend, the two vampire hunters set off for Dracula's castle in Eastern Europe to take on the evil vampiress. However, having planned for the heroes to come to the castle, Bartley had already fled, leaving behind a trail of chaos as the heroes ventured from one location to the next all over Europe in thbeir quest to rid the world of her evil.

Eventually they ended up at Castle Properina, last refuge for the evil Countess and site of her proposed ritual to resurrect the vampire lord, Dracula. Chasing the vampiress all the way to the top of her tower, Eric fought the demon queen, besting her in combat and avenging his lost love's life. However, Bartley (with the aid of Death) had managed to resurrect Dracula, forcing the two heroes into one more pitched battle. They were able to defeat him, too, with their combined powers, riding the world once again of his evil. As they stood outside, watching the castle crumble, the felt assured that this time Dracula's evil was gone from the world. 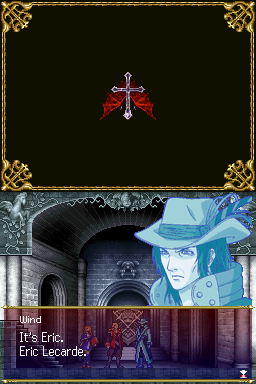 Sadly, the heroes were proven wrong. Not long after the battle with Dracula, John Morris fell ill having expended his lifeforce using the Vampire Killer to best the forces of darkness. His energy tapped out, John died, leaving Eric as the sole protector of both the Morris and Lecarde clans. Eric, keeping a watchful eye on John's son, Johnathan Morris, settled down to raise a new family. He eventually had two daughters, Stella and Loretta, who he traied in the ways of vampire hunting.

Unfortunately a new vampire lord, Brauner, rose up to try and tap into the powers of Dracula. He brought forth Dracula's castle and, when Eric went to the fortress to stop the resurrected demonic magic, Brauner captured the hero. Eric's two daughters went into the castle to rescue their father but Brauner cast a spell over them, making them fall in love with him as if was their father. He then killed Eric and went off to continue doing any other random evil things that came into his head (gotta admit, the man was on a roll).

Eric wasn't entirely gone, though. Through magic he had bound his soul to the castle, haunting the halls as an aparition. When, sometime later, Johnathan Morris came to the castle which his own traveling companion, Charlotte Aulin, Eric (initially hiding his identity and going under the name of "Wind") acted as a guide and teacher for the younger Morris. Though his insight Johnathan gained control over his abilities and it was through Johnathan's power that Eric got to see his daughter's freed from Brauner's evil influence. As one of his last acts, Eric revealed who he was. He told Johnathan about how the young vampire hunter's father died, assisting the boy in unlocking the true potential of the Vampire Killer (and with it a way to use the whip without it killing it's host).

Safe in the knowledge that Brauner was dead and the dark magics of the castle were cast back into the abyss, Eric faded from the world, his spirit free of its guilt.

Although we'd already seen a number of heroes come before Eric by this point in the series (Castlevania III had given us three non-Belmont heroes, for example), Eric was definately a different kind of character from the ones that came before him. Like his friend, John, it did seem like Eric was created to be a kind of answer to the Belmonts from before. Although he lacked the whip, Eric still had a number of hybrid moves that Simon would felt comfortable using -- spearing in multiple directions, including downwards from a jump. He also had a over-charged spear attack he could gain which, functionally, was a lot like Richter's flame whip item crash.

To differentiate the two heroes, Eric is unable to use his spear to latch onto certain surfaces (unlike Eric) -- this makes a certain amount of sense since spear are not exactly known for thier grippy abilities. Instead, Eric can power-up his duck (not unlike the heroes in Super Mario Bros. 2 to perform a super-high leap vertically. This allowed him to explore branching paths that John was unable to reach.

Still, it wasn't until Castlevania Judgment that Eric was given anything to truly differentiate him from the standard Belmont. Here a greater emphasis was placed on his spear, giving him highly acrobatic, very quick spear strikes he could perform. Suddenly Eric was much less of a Belmont clone and much more his own kind of fighter, capable and very quick.

It's worth noting that while Eric himself didn't show up in Castlevania: Nocturne in the Moonlight (the Japan-only Saturn port of Symphony of the Night), his spear did. Found in the inverted Hell Garden, the spear was yet another weapon Alucard could pick up and wield (although liekly players would end up just going back to the Alucard Sword or Crissagrim after finding it). The spear reappeared later still in Portrait of Ruin where Johnathan could get it after completing the "Spear of Legend" quest.