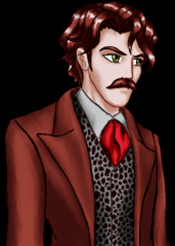 As the Castlevania series progressed and different time periods were fleshed out, the decision (by Konami) was eventually made to explore a more modern setting (past the time period of Richter Belmont). Whatever the reason behind it -- maybe the series producers noticed that the timeline they had set up, with Dracula coming back every 100 years, coincided nicely with the time period of the novel -- the decision was made to tie the plotline of Castlevania Bloodlines (set in 1917 AD) into the plotline of Bram Stoker's novel, Dracula (set in the 1890 AD).

To make this story work, Konami elected to make one of the characters of the novel, Quincey Morris, into a distant relative of the Belmont clan. This then tied in one of the game's two protagonists, John Morris, nicely setting him up as Quincey's son. This wasn't without it's own weird wrinkles, causing some continuity inconsistencies between novel and game (which we'll cover in a bit), but it was a creative decision -- why not tie both together since they both feature Dracula as the main villain?

Adding Quincey in as a Belmont heir (and John Morris, and then Jonathan Morris later on) did aid Castlevania continuity. By adding in non-Belmonts to the series, ones that can use the famed clan whip, the Vampire Killer, the game provided future plotlines via exploring why the whip was passed to non-Belmonts and what happened to the clan. All those ideas first started in Bloodlines.

Although the first part of the original novel concerns itself with the adventures (and misadventures) of Jonathan Harker at Castle Dracula, Quincey's part of the story doesn't come until close to a third of the way in. He's introduced as one of three suitors to Lucy Westenra (friend of Mina Murray, herself fiancee to Jonathan). Along with Arthur Holmwood and Dr. John Seward, Quincey vies for the affection of the lovely Westenra. Quincey brought money and allure to the table, being a wealthy oil magnate from Texas -- and, as per the Castlevania series, he was also secretly a vampire hunter.

Eventually Lucy chooses Holmwood over the other two suitors, but all three stick around for a time (presumably because one can never get enough of that Texas charm). Sadly, events would conspire against the happy friends as, soon thereafter, Dracula made his way from his castle high in the mountains of Romania to England. There, he set about setting up a proper home for himself. Oh, and he also elected to feed on Lucy Westenra, putting a damper on her future marriage prospects. With the young lady slowly fading from apparent blood loss, the suitors all banded together (with the aid of Abraham Van Helsing, a doctor and expert in the arcane) to give her blood and prolong her life. Sadly, despite their best efforts (and the sage mystic advise of Van Hesling, which presumably Quincey was on-board with as he was a vampire hunter), Lucy died.

While Holmwood and Seward believe Lucy to be truly dead, Van Helsing and Harker (and, one must again assume, Quincey) believe the girl to not be truly dead but "undead", a living revanant that feeds on the lifeofrce of the living. After a long stakeout, their supposition that the girl is now a vampire pay off, as they find her creeping back to her crypt, a young infant in her arms -- a late night snack, naturally. The vampire hunters corner Lucy and stake her, chopping off her head and stuffing it with garlic in the process.

Sensing his time in England may already be limited, Dracula fled back home by sea, but the vampire hunters traveled faster, using the train system to get ahead of the vampire lord and stake out his castle first. After killing Dracula's three brides (possibly his sisters, or just women he brought into the fold long ago), the vampire hunters have a final confrontation with Dracula. Although he is mortally wounded in the ensuing battle, Quincey strikes the killing blow against Dracula, staking the vampire's heart and ridding the land of his foul magic. Quincey dies a heroes death, knowledgable that Dracula has been put to rest... for a time, anyway...

In the book, Quincey Morris knows as little about vampires as the rest of the suitors. By turning him into a distant Belmont relative, one that has the famed Vampire Killer in hand, Konami changed his role in the original book (even if they didn't mean to). This shades the character as someone that knew about vampires all along and would, presumably, have first-hand knowledge of how to fight them. It also means that, once Lucy (his would-be love) starts to show signs of vampirism, he'd likely already be able to tell what was going on even without Van Helsing around to explain it. Effectively, once Lucy fell under Dracula's sway, every interaction Quincey had with the characters in the book would have been very different.

Of course, it's doubtful that Quincey Morris would have even been in England in the mid 1890s -- by the known time schedule for Dracula, the vampire would have been rising from the dead any day. Quincey, as the keeper of the Vampire Killer, would have had a sacred duty to be in Romania awaiting Dracula's resurrection. For him to ignore his duty, his pledge, to chase skirts in England seems counter to his character and completely against type for someone who inherited the whip -- only the truly heroic can wield it.

That said, Quincey doesn't use the whip in the book, so maybe the whole "Dracula making it to England" thing was partially his fault. Still, it seems against his character -- the proud, honorable cowboy -- to shirk his duty so completely.

Then, of course, there's the issue of John Morris, Quincey's son. In the story for Bloodlines it's established that John was there, as a little kid, in Dracula's lands on the night of the fateful final battle and that he sees is father die. Quincey in the book, though, doesn't have a kid, and by all accounts he's a bachelor. While it's not beyond the bounds of reason for wealthy cowboy to go to England to find a wife and mother for his child, it does seem a little weird that he'd not only bring along the boy to England, but also later to the dangerous lands in Romania. Plus, how old was John at that point? He wouldn't even have any training in the whip, so when it was passed to him he'd be at a loss as to what to do. And yet the game says he took up the whip to honor his father and the sacred duty of the Belmonts.

Yeah, there are a host of continuity issues one has to ignore if you're going to work the novel into Castlevania Bloodlines. In some ways it might have been easier to use a different character other than Quincey, like maybe have the child that takes up the whip be the son of Jonathan and Mina Harker born after the events at the castle. The way Konami did it is workable, but not at all a great solution.