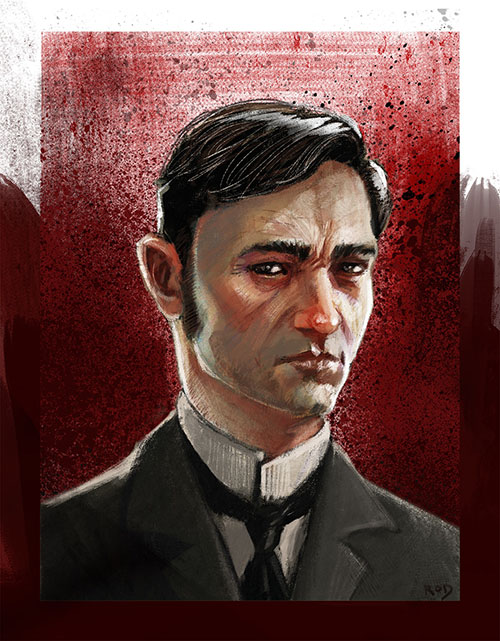 Bram Stoker's novel, Dracula, is an interesting literary work to analyze with modern eyes. While we at the Inverted Dungeon aren't huge fans of the work as a work of fiction, we will note that it has some interesting qualities, and one of those that fascinates us the most is the path of Jonathan Harker. He's introduced as the lead character of the novel, the one we'd expect to act as the true protagonist of the story, but his tale really only serves as a prologue before the view shifts and new characters take up the story of the novel.

It's an interesting bait-and-switch that certainly sets it apart from other contemporaries in the classic horror field. In contrast to Mary Shelley's Frankenstein, where the lead character is that of the titular scientist, Dracula doesn't feature it's monster, Dracula, in a lead role, while it has a collection of characters who join to serve as the "protagonist" of the story. That does mean that no one character necessarily stands out more than others, but it does allow the viewpoint to shift and change as suits the needs of the story.

Sadly, that also means that Harker's role in the novel (and, really, pop culture in general) is diminished. Harker doesn't get the chance to really act as a hero; his encounter with the beast leaves his sidelined for much of the story and by the time he returns to the novel he has to share the spotlight with other manly heroes. Were the story created today, it's easy to see Harker's story serving as an origin story of a vampire hunter taking on the forces of darkness; modern audiences do like our superhero tales, after all.

Bram Stoker's novel opens with Jonathan Harker's arrival at Castle Dracula. Told via a series of letters to his fiancee, Mina Murray, Harker recounts his journey to Romania via train first, and then carriage to the estate of Count Dracula. The villagers along the way seem wary of where Harker was headed, but eventually he made his way to the crumbling castle, finding a warm (if someone creepy) welcome from the lord of the manor, Dracula himself.

The reason for Harker's arrival was that the young solicitor was hired to serve as Dracula's lawyer in a matter of purchasing land in England. Dracula has aspirations to leave his crumbling edifice and, in dealing with the law offices Harker worked for (who then sent Harker to Romania to finalize the paperwork), a quiet spot at the old Whitby Manor was selected. Jonathan assisted Dracula with signing the necessary paperwork and getting everything in order, all with the intent of getting back to his life in England, and his fiancee, as soon as possible.

Dracula, however, had other plans. Dracula wasn't just some eccentric count looking to leave his old ancestral home but was, in fact, a vampire. The signing of the paperwork was, in essence, an invitation for the vampire to leave Romania and enter England. With the matters settled, Dracula had no further use for Harker as a lawyer and, instead, started using his as a source of blood to sate his need for blood. Harker became weaker and weaker, and the Count, controlling the poor man's mind, had the lawyer write letters detailing his journey home that would then be sent, at appropriate times, to make it look like Harker was returning the England. By then, of course, he'd be dead, killed by loss of blood. Dracula then tossed Harker aside, giving the man to three Vampire Brides that roamed the castle late at night, while the Count ventured off by ship to merry old England.

Harker, though, found a way to escape, plunging from the high ramparts of the castle to the icy waters below. Somehow he survived this fall and woke up weeks later in hospice, rambling about the mad monster at Castle Dracula. This eventually lead to care workers to send for Mina, who (already worried about her soon-to-be husband) came at once. She found her man in a poor state, but through her love and care, he steadily rebounded. They married there, in the foreign country, before returning to England. Sadly, when they came back they found that Dracula had already been conducting his evil business: the vampire had killed Mina's best friend, Lucy Westenra, and with Mina back in the country, he set his sights on a new prize.

Harker's return to England came alongside the assistance of Dr. Abraham Van Helsing. Van Helsing has been called in by one of Lucy's suitors, Dr. John Seward, and between the three suitors (including Lord Arthur Holmwood and Texas cowboy and secret vampire hunter Quincey Morris), the men had realized that Lucy had been turned into a vampire, forcing them to put her down in her own grave to stop the spread of vampirism. With Harker back, the men soon realized who had turned Lucy into a creature of the night: Dracula.

This led the group to chase Dracula out of England and then all the way back to Romania: they had to not only stop him but also free Mina from his curse before she, too, became a vampire. The men ventured to Castle Dracula where, eventually, the faced off against the vampire and his brides, eliminating all the vampires from this nest. This saved Mina and ensured that the curse of the vampire was stopped, once and for all (or so they thought). Jonathan and Mina then returned to England to settle down and raise a family in peace, free of thoughts of vampires ever again.

As Jonathan is the lead character of the first act of Dracula, he shows up in just about every adaptation of the novel to the Silver Screen. That said, his role in most of these adaptations is generally quite minor. Like in the novel, he's usually taken over by the vampire and then made into a vassal, of one kind or another. Emphasis is, instead, placed more on Mina who becomes the lead character of many of these versions (as, frankly, she is the much more interesting character).

One adaptation of note, though, is Nosferatu: The Vampyre from 1979. In this version, Jonathan not only becomes a vassal of Dracula but, eventually, inherits the vampire's full power, taking on the role of Master Vampire after Dracula is defeated. Its the most interesting version of the character we at the Inverted Dungeon have seen.

Of course, if we venture outside of movies, Jonathan does get a better role to play. The best for the character comes from the video games based on Dracula 1992. These games cast Harker in the lead role, having him venture across landscapes to take on Dracula and rid the land of his vampiric evil. The games sucked, but Harker did get to play that key, vital role.