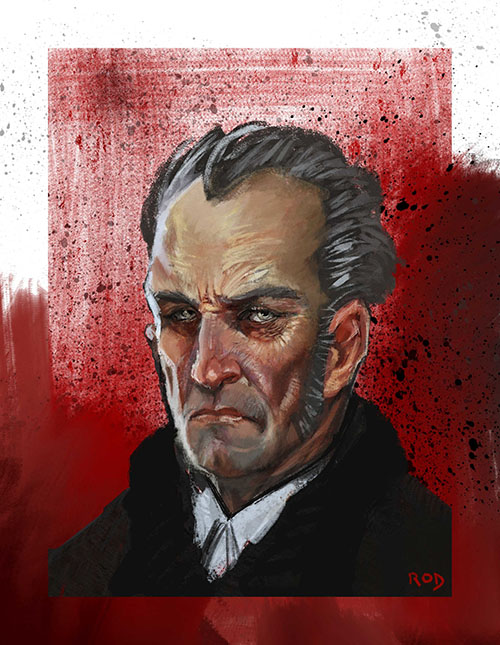 If there's any character from Bram Stoker's Dracula as iconic as Dracula himself it would be Dr. Abraham Van Helsing. Realistically that's not because of the novel, where he's an old man who, while cognizant of vampires, is no more or less important to the story than the other heroes of the book. No, it's fair to say that Van Helsing is famous, and iconic, because of the life he's led on the Silver Screen.

It makes a certain amount of sense when you think about it: films work best when there's a hero to go up against the villain, and mano-a-mano battle that pits good and evil, right and wrong against each other. Teams can work together against a common foe, but the best and easiest stories for audiences to accept had a single hero to lead the charge. Van Helsing, the scientist-turned-vampire hunter, fits that bill nicely, and so many of the films to come out since the release of Dracula have given Van Helsing a prominent role.

Certainly this was aided in no small part bu the Hammer Dracula series, which featured nearly as many appearances by Peter Cushing's Van Helsing as Christopher Lee's Dracula. That series made him into a legends, the illustrious vampire hunter and hero of the ages. Since then, Van Helsing went on to become a icon of the screen, even getting his own film eventually (fighting monsters, of course). Not bad for someone that started out as an old man fearful of the monsters he suddenly sound himself fighting.

Van Helsing joins our story late, as much of the narrative has already started. It all goes back to Lucy Westenra and her three suitors, Arthur Holmwood, Quincey Morris, and John Seward. All three men vied for her affections but Lucy chose Holmwood. Despite their hurt feelings, the other two men stuck around as they'd all been war buddies and best friends for years. Thus they were all present when, for some reason, Lucy's health degraded, an apparent case of anemia she just couldn't shake.

Fearing for her life, and seeing strange marks upon her body, Seward (a psychiatrist that ran the nearby asylum) called in an associate: Dr. Abraham Van Helsing. The two had bonded early when Seward was Van Helsing's student and (during an incident the book doesn't go into) Seward later saved the good doctor's life. Thinking Van Helsing might succeed where the doctors had failed, Seward contact's the older doctor and informs him of the case. Van Helsing hops on a train immediate to head to England.

Arriving as soon as he could, Van Helsing immediately tends to Lucy, and he's the first to realize that she was being stalked, and slowly killed, by a vampire. Van Helsing prescribed multiple blood transfusions, which the men of her circle willingly provided. These help for a time, as does surrounding her room with garlic and garlic flowers, along with putting a golden crucifix on the girl. However, Lucy's mother, along with a servant, foolishly clear away the garlic and the cross, and this left Lucy vulnerable when Dracula showed up one final time, draining the girl completely. The men could only watch as the life slipped from her body and she grew cold.

Although the men mourn their loss and prepare to bury the girl, Van Helsing realized that their duty to her wasn't done. After the funeral he convinced the rest of the group to go to her grave, to wait and watch. Sure enough, Lucy appeared, coming to her crypt late that night with a struggling load, a baby that she'd planned to feed upon. The men stopped Lucy and, under Van Helsing's instruction, staked her and beheaded her. They freed the demonic presence from her body and, hopefully, sent her soul on to Heaven where she could have been at peace.

Still the work was not done, though, as the vampire that caused these awful events still existed. Worse, Lucy's friend, Mina Murray, started suffering the same conditions that eventually led to Lucy's death. Between the two, Mina and Abraham, they realized that Mina was not only being attacked by the same vampire that had killed Lucy but that she had a psychic connection to the vampire. After the men tracked down ever place the vampire had purchased, locations around England that served as his daytime resting places, this left Dracula with few places left to hide. Mina saw, through his eyes, that was had purchased passage back to Romania, and that meant the party had to follow.

Via Arthur's financial connections, the crew made it to mainland Europe and began their trek to the castle. The party split in two, with Abraham taking Mina with him, using her psychic connection to Dracula to track him and attempt to get ahead of the vampire. They made it to Castle Dracula before the vampire, and Abraham went through the castle rooms, finding every place the vampire could have hid and sullying them with holy relics. He also came upon Dracula's Vampire Brides, the three female vampires that protected the castle, He killed the three, beheading them and ridding the castle of their foul energy.

Finally Dracula arrived, with the rest of the party right behind him. Abraham faced off with the men, battling the vampire back and fighting with all he had to ensure the beast was destroyed. The vampire did die, by their collective efforts, and with his death Mina was freed from her curse. Freed from the darkness of Dracula the sun rose on the party as the world was returned to a state of peace. In the years that followed Abraham stayed in touch with Mina and her husband, Jonathan Harker, becoming something of a grandfather to their children.

As noted above, Van Helsing is a popular character in vampire media, having appeared (in some form) in just about every Dracula adaptation ever. Not all the sequels featured him (the Universal films, for example, did not), but Hammer certainly made good use of the hunter, even going so far as to make him the lead of the first Dracula sequel in their series, 1960's The Brides of Dracula, before having him return, time and again, in many of the later films in the series.

Van Helsing has gone on to have other starring roles, of course, such as in Universal's Van Helsing starring Hugh Jackman. Other works have featured his descendants, relatives, or other people using his name, with works ranging from Dracula 3000, to Count Duckula, and Vampirella all featuring someone in the Van Helsing line (or related in some way). Hell, there's even works like Helsing that reference his name even if the characters aren't technical part of the Van Helsing lineage.

IN short, where vampires go you can be assure that there's some kind of Van Helsing out there, waiting to stalk the dead.