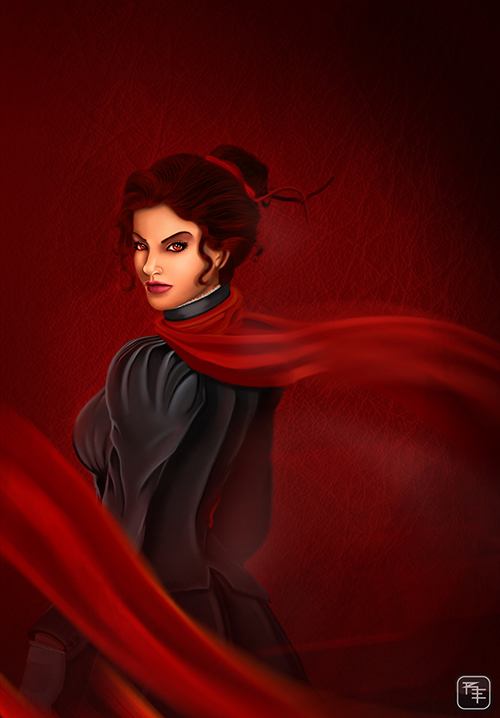 Although her fiance (and soon to be husband) Jonathan Harker is the lead character at the start of Bram Stoker's novel, Dracula, Mina Murry is really the focal point of the story. She's the closest we really have to a protagonist (a duty that is, frankly, shared among the various cast members of the story), having the closest to an actual arc. She goes from young woman in love to seeing her best friend die, nearly watching her fiance die, nearly being taken over by a vampire, and coming out of it stronger (and married) and ready for what life has for her after, an equal to her husband in every way.

Of course, none of that makes it into the Castlevania series as Bram Stoker's novel is but a footnote to a "sequel" game, Castlevania: Bloodlines. The only character of note in that game is Quincey Morris, with all the other characters from the novel shunted off to the side, their part in the tale done as the cover closes on the book.

That said, the series does make one minor reference to Mina via a different character, Mina Hakuba. Appearing in Castlevania: Aria of Sorrow and Castlevania: Dawn of Sorrow, Mina is the girlfriend of the hero of those games, Soma Cruz, and when it's revealed that Soma is actually the reincarnated soul of Dracula, the connection between the Mina of the games and the Mina of the novel makes a lot more sense.

Still, it would have been cool to see a greater adventure for Mina (and maybe some of the other heroes) from the novel in a proper Castlevania. Sadly, aside from references like that above, it seems like Konami has little interest in working the story of Dracula deeper into the game series.

When her fiance, the solicitor Jonathan Harker, goes off to Romania to deal with an important client, young Mina Murray heads out into the countryside to visit with her best friend, Lucy Westenra. Lucy was always something of a debutante, more worried about men and fun than about settling down. The woman had three suitors she was courting -- Lord Arthur Holmwood, Dr. John Seward, and Texas cowboy (and secret vampire hunter) Quincey Morris -- and she strung all three of them along, in contrast to Mina who was ready to settle down as soon as Jonathan returned.

But the weeks ticked by and Jonathan didn't return, which worried Mina greatly. Meanwhile, Lucy suddenly took a turn, finding her health failing with no explanation as to why. The doctors blamed anemia, but not solution seemed to work; pumping the girl full of blood only slowed the process but didn't stop it. When word from Romania came in that Harker had been found, and was convalescing in hospice, Mina rushed off to join him and help his recovery, leaving Lucy in the hands of the men who loved her. Sadly, she died; worse, as they soon discovered, Lucy came back as a vampire.

Mina had her own horror to discover as Jonathan raved about the evils of Count Dracula (the client he'd met with who'd turned out to be a vampire). When Mina and Jonathan returned home, having married while away, they found out all about Lucy's death and the pieces started clicking into place. Dracula was a vampire, Lucy had become a vampire, and Dracula had moved to England. But, horrifyingly, Mina too started to fall prey to the vampire's evil; somehow the vampire was finding her at night and feeding upon her, slowly killing her the way he'd killed Lucy. The men knew what they had to do.

Banding together, the party struck out to find Dracula's hidden lairs around England, destroying each as they came upon them. This forced Dracula to flee England, leaving for the old home back in Romania. The men gave chance, using Mina as their beacon to track the vampire and try to stop him from reaching his home. This lead to a battle at the steps of Castle Dracula as the heroes fought valiantly against the vampire (and his minions) to save Mina (and the world). They were eventually successful, with Dracula dead at their feet as the sun rose above them. His evil had been stopped, once and for all (or, at least, for a time).

Mina is essentially the protagonist of the story of Dracula as she's the connective figure between all the characters: betrothed to Jonathan, best friend with Lucy, who in turn has a collection of suitors attached to her. Everything rotates around Mina, especially in the last act as she slowly succumbs to Dracula's power, and, as such, she is usually depicted as the lead character in Dracula adaptations on the Silver Screen. Usually these depictions give her a place similar to that of the novel, the woman pursued by Dracula, often who has to be saved. Sometimes she's a willing lover, but more often she's fighting his power hoping to resist his evil plague.

Occasionally, on screen or in the pages of novels and comics, Mina is shown to be something more than a damsel in distress. The League of Extraordinary Gentlemen, the comics that is, had her divorced, working as a government agent for England after recovering from her run in with the vampire, while the movie based on the comics made her into an actual vampire who, still, fought on the side of good. Certainly Mina is the most interesting character from the novel and her ordeal gave plenty of writers fodder to work with in the years since the novel's publication.