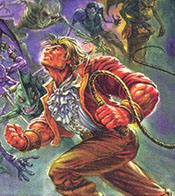 As we touched on in the bio for Quincey Morris, Konami (for whatever reason) elected to tie the plotline of Bram Stoker's novel Dracula into the Castlevania series. The book and the series did align nicely -- the games featured Dracula coming back every 100 years, and the original novel was set the 1890s AD right around the time Dracula was scheduled to come back again.

It was John's father, Quincey, who fought Dracula that time -- based, one has to assume, on the decision not to directly adapt the novel into a Castlevania game (since there were already a number of unrelated games based on the 1992 film based on the original novel, most of which sucked). Instead, they created a sequel that tied both the novel and the game series together, and introduced the newest protagonist: John Morris, keeper of the famed Vampire Killer and defender of the world against the forces of darkness (specifically Dracula).

While the series had seen non-Belmont heroes before, John Morris was special. He was the lead hero of the story, the Belmont-surrogate in a game without any actual Belmonts at all. The Morris clan (from Quincey to John) were entrusted with the whip (as later fleshed out in future games), the keepers of the whip during a time when the Belmonts were unable to use their greatest weapon. Those details were not initially revealed, though, and originally we were simply left to assume that the Belmont has married out or died off and a related family had to use the whip. Whatever the reasoning given after the fact, John was something new for fans, a character that proved you didn't have to have the Belmont name to kick some vampire ass.

And then Konami killed him. That sucks.

As it's revealed in later games (primarily Portrait of Ruin and Order of Ecclesia), after Richter Belmont defeated Dracula the famed whip of the vampire hunting clan, the Vampire Hunter, was tainted and locked away from Belmont use. They would have to wait until 1999 to be able to use their whip to seal away Dracula once and for all. Instead, the whip was handed to non-Belmonts for safe keeping. The Morris clan was one of these groups, and they took great honor in their sacred duty.

Leading into Bloodlines we first have to look back at Bram Stoker's Dracula and the events at the end of the book. There, Dracula is chased back to Romania by the greiving suitors of Lucy Westenra (one of Dracula's first victims in the book who was then turned into a vampire, potentially making her one of his many brides). Quincey Morris, John's father, was among those suitors and (in a detail embelished in Bloodlines) John went with his father on the great chase across Romania to stop the evil vampire. Quincey landed the fatal blow (a detail from the book itself) and Dracula was defeated (as he always is).

The details from the book give way to the games at this point, and Bloodlines establishes that Quincey may have landed the final blow against Dracula, but the vampire hunter he was mortally wounded as well. With his dying moments, Quincey bequeathed the Vampire Killer to his son, John, for safe keeping and to use in case Dracula ever returned (which, considering Dracula, all but ensured he would return because anything will bring Dracula back from the dead -- seriously, if you look in the mirror and say his name three times, Dracula will return from the grave).

Growing up, John practiced the use of the whip, learned to harness its full powers. He befriended Eric Lecard, a powerful warrior in his own right (who knew something about the power of the Vampire Killer whip). During the twenty years that followed, as the two friend grew up and grew powerful, a Great War broke out and spread across Europe. Using the powerful magics unleashed by this bloody chaos, Dracula's niece Elizabeth Bartley (Erzsebet Bathory) was able to resurrect the evil vampire so that they could once again try to rule the world. Of course, a vampire hunters were expected, so the evil demons planned ahead.

When John arrived at Castle Dracula he discovered that the place was nearly abandoned. Dracula wasn't at his home but had fled, leaving the vampire hunter to track him across the continent, through towers and sunken cities and even a munitions factory (in a nice touch to the era), all before arriving at Castle Prosperina for the final confrontation. Despite the best efforts of Elizabeth, who was defeated at the castle, it all came down to a final battle between the dark prince and the hunter. The battle raged, but it was John Morris who walked away the victor.

Although the John Morris doesn't appear in the story of Portrait of Ruin, he's very much a part of the plot of the game. As it's revealed in the story, after the events of Bloodlines, John Morris continued to use the Vampire Killer to hunt down evil and ensure that the forces of darkness would not rise again in his lifetime. Unfortunately, unless the wielder of the whip was a member of the Belmont clan they whip would have a negative effect on their health, eventually killing them.

Such was the case with John -- although he was able to seal Dracula away for a time by using the whip, it eventually killed him. Before his death he passed the whip on to his son, Johnathan (hero of Portrait of Ruin), but he didn't train his son in the ways of using the whip for it's full potential (in the hopes that the whip wouldn't kill the son like it did the father). Johnathan resented his father for this but, as the story of Portrait unfolds, the younger Morris eventually forgives his father and learns, in his own way, how to control the potent whip's power.

It's interesting to look at John Morris from the perspective of the games that came out in his era. Before Bloodlines we'd had to very different games. Super Castlevania IV introduced a new version of Simon Belmont, one who had gained control over his whip so he could attack in multiple directions and even use it latch onto hooks to swing around. Simon still wasn't very acrobatic, and he didn't receive any other upgrades. However, Castlevania Dracula X: Rondo of Blood introduced Richter who, while lacking the whip finesse of Simon, gained acrobatic flips as well as over-powered items (Item Crashes), including a flame whip he could "crash" if he had no other items.

John, then, plays a bit like a hybrid of the two styles. Like Simon he can whip more impressively -- not just left and right but upwards at an angle as well (and straight down when jumping). He's not quite as agile with the whip as Simon, but still more so than any other Belmont. He can also latch onto horizontal ceilings for some swinging fun (which is actually put to effect in some levels via branching paths). And although he lacks the acrobatic jumps of Richter, he can gain an over-powered flame whip not unlike Richter's whip crash (the crashes weren't included, presumably due to the limited hardware of the Sega Genesis). John then gets a bit of the best of both worlds -- maneuverability and power when he needed it most.