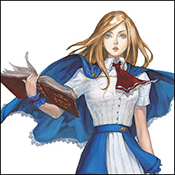 If one were to ask fans who was the most famous family in the Castlevania series, hands down it would be the Belmonts, followed close by the Belnades clan (sorry DaNastys). It's interesting when you realize that officially there's only been four members of the Belnades clan features as heroes in the series, and two of them don't even have the last name of "Belnades". That's part of why the inclusion of Charlotte in Castlevania: Portrait of Ruin is so special -- she's one of the four and, arguably, the most powerful of them all.

It's even weirder to think that Charlotte was included in a sequel to Castlevania Bloodlines, a game that didn't include any Belnades characters at all. That makes the dynamic of Portrait more like that of Castlevania III, which, as we well know, is a favorite of one-times series producer (and overseer on Portrait), IGA. Johnathan Morris is the Belmont stand-in for the game, acting like a Trevor to Charlotte's Sypha Belnades.

That said, Charlotte has a lot of things that differentiate her, from a wider selection of spells to more varied and powerful attacks. She is, however, a worthy successor to the clan-members than came before, a grand entry for the ladies of the series and the magical mayhem they can cause.

When Dracula's castle reappeared in the Carpathian countryside, two young heroes arrived at the dark and gloomy gates: Charlotte Aulin and Johnathan Morris. Raised alongside Johnathan from an early age, Charlotte excelled in her studied, proving to be smart and capable with magic. When Johnathan went to the castle, Charlotte had to go, too. It was clearly her destiny (much like the destiny Johnathan was trying to run from). 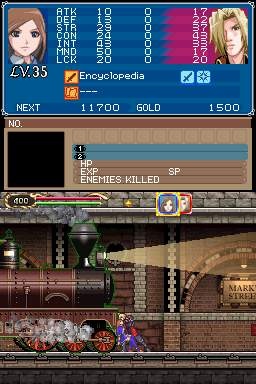 While exploring the castle with her friend (and Vampire Killer protector), Johnathan, Charlotte soon encountered the real evil in the castle, the master vampire Brauner. A nasty piece of work with a flair for the dramatic, Brauner had painted (literally) portals to other worlds, using the power derived from this magic to fuel his own plan to take over the castle and become the new Dark Lord. With the aid of his two daughters, Stella and Loretta, Brauner challenged the heroes to find a way to his keep where he would then kill them for their petty attempts.

Meanwhile, one person in the castle provided assistance to the young heroes: Wind. A mysterious, ghostly figure, Wind advised Charlotte and providing training quests the two heroes could run. As the heroes explored the worlds within the paintings, Wind gave them advice and the tools they'd need to help their future explorations.

Of course, Wind had his own secret. As was revealed eventually, Wind was actually Eric Lecarde, the other hero of Bloodlines and one-time friend of John Morris. Eric's daughters, Stella and Loretta, had come to the castle to defeat Brauner, but were instead captured, turned to vampires, and brainwashed so they believed themselves to be Brauner's children instead. Eric had come to the castle, but was defeated by Brauner and trapped within the halls.

It was through Wind's advice and assistance than Charlotte and Johnathan were able to free the two women. Using the powerful Sanctuary spell, Charlotte cleared the vampirism from Stella and Loretta, freeing their souls from Brauner's corruption. After the ladies also assisted Johnathan (helping him gain control of the Vampire Killer), the two young heroes ventured deeper into Castle Dracula.

Within the upper reaches of the fortress, Charlotte and Johnathan found new paintings to explore and new powers to gain, all before their final confrontation with Brauner. However, the adventure wasn't over upon the vampire lord's death, as the Grim Reaper came out and used the death of Brauner to resurrect Dracula. Teaming up with the true Dark Lord, the two villains became a mighty force of evil that our heroes had to destroy. The battle was fierce, but our heroes triumphed.

At the end, Charlotte and Johnathan escaped the castle with Stella and Loretta. Wind was released from the curse binding him to the castle, freeing his soul for the afterlife. Charlotte had proven herself a capable warrior, one who could stand toe-to-toe with her male compatriot (and wasn't simply this annoying, brainy girl he knew). 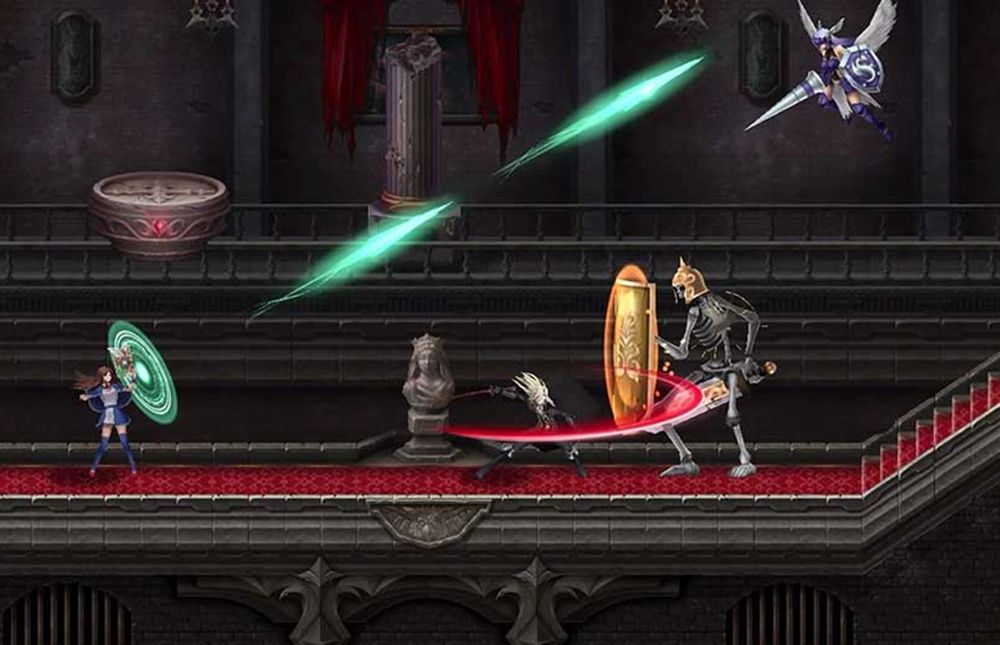 Charlotte is one of many heroes to appear in the large, crossover title Grimoire of Souls. In this adventure, multiple heroes get resurrected by the power of the Grimoires, powerful books seemingly tied to Dracula's magic. It is thought that, somehow, the books could be used to bring back the Dark Lord (despite his soul living on, reincarnated into the good-natured lad Soma Cruz). However, things aren't what they seem when someone in the order devoted to the books starts tapping into the dark magic, seemingly to awaken those dark magics.

Pulled out of the books by Lucy Westenra, a librarian of the order, the heroes have to band together and go into the various volumes, exploring each of the past times when Dracula rose up and then was defeated. This puts them in direct opposition, it would seem to the dark sorceress (and one time librarian) Hermina. She stole some of the books before and everyone in the order assumed she was the one attempting to resurrect Dracula. This was only made more obvious when she showed up with a seemingly mind-controlled Soma, in his Dark King form, ready to steal the vital souls from the various volumes.

As it was soon revealed, though, it wasn't Hermina but the leader of the order, Seward, who was behind the attempt to raise the Dark Lord. Seward was, in fact, Dracula's faithful servant Death, and with the power of the vital souls in the books Death was able to fulfill his purpose and bring about the resurrection of the true Dark Lord.

Seeing no recourse, the heroes traveled back into the oldest of the volumes, that tied to the era of Dracula's first true defeat in 1476, where they teamed up with Trevor Belmont to fight the Dark Lord and, once and for all, ensure that his dark magics were destroyed, ensuring he could never rise up again.

Grimoire of souls is a mutli-episode game released for mobile phones. Each adventure in the game featured chapters taken from other games in the series, such as an episode recreating sections of Portrait of Ruin.

Charlotte is one of the starting characters in Harmony of Despair, her one non-continuity appearance so far. Of course, this whole game is a flight-of-fancy, non-continuity adventure, so nothing that happened in the game actually had any effect on the greater continuity 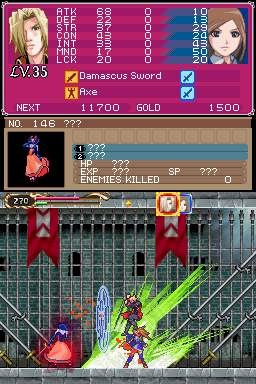 Charlotte is not your average Belnades sorceress. Her primary attack are magical books which she swings at enemies (often with the weapons from the stories in the books themselves swinging out at enemies). She also uses magic via the various magical scrolls she finds, giving her more than just the basic Ice, Fire, and Lightning spells to use. Her attacks can grow pretty devastating, allowing her to perform good crowd control as she's exploring the castle. Johnathan may be better for boss fights (especially with the right weapons), but Charlotte generally is the better character for the deep dives through the various halls of the castle.

Unlike John and Eric in Bloodlines where the two characters take separate journeys through the castle, Portrait of Ruin puts Charlotte and Johnathan on screen at the same time; they share the same magic and health but one is always in the "lead". They can also team up for more powerful attacks and aid each other in exploration, creating an interesting game play dynamic unique in the Castlevania series.

The two-player team-up dynamic is lost in Harmony of Despair. While Charlotte can team up with some heroes to perform dual-attacks (as there can be a bunch of heroes running around in the game at once), the exploration aspects of the team-up were removed. They also no longer share magic and health, which might be considered a bonus. In all other ways, though, Charlotte plays the same as her Portrait incarnation. While she only ever has one weapon in the game, her Book of Binding, she can collect spells from downed enemies. As a bonus, the more spells she collects (even duplicates of spells in her inventory), the more powerful her book's attacks get.