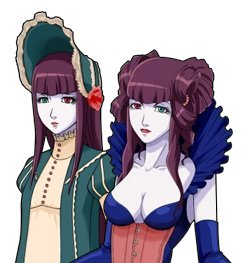 There is a history in Castlevania games of Dracula going after the family members of the main heroes. It started all the way back with Hunated Castle when Dracual kidnapped alternate-Simon's lady love. Of course, the most prominent version of events is in Castlevania Adventure II when Dracula captures, and brain-washes, Christopher Belmont's son, Soleiyu. This made the family member not only bait but also a boss to fight.

Considering this, it's not entirely surprising this theme was revisited years later for Castlevania: Portrait of Ruin, where-in Eric Lecarde's two daughters, Stella and Loretta, and taken by evil vampire Brauner for his own uses. It's an interesting dynamic and certainly adds drama to the story. Plus, it also gave the game two extra characters to play with as unlockable heroes for the bonus modes, a tradition at that point in the series.

The twin daughters of Eric Lecarde, hero of Castlevania: Bloodlines, Stella and Loretta followed in thier fathers footsteps, learning the ways of monster hunting. Powerful magic users, they also mastered their gifts, learning to harness wind and ice spells to aid in their battles. When Dracula's castle reappeared on the Borgo Pass one fateful day, Stella and Loretta were eager to run to the castle and defeat the evil within, but their father forbid them following him. He went alone, and then wasn't heard from.

Worried for their father, the girls ventured to the castle. The searched the halls but, when they reached the top of the castle, what they found chilled them to their bones: their father was mortally wounded and standing over him was the evil vampire Brauner. Quickly, the vampire lord clouded the minds of the girls, using magic to convince them that they were his daughters instead of Eric's. He then turned them into vampires, and the three of them rules over the castle (while Eric spirit was cast to the lower levels to haunt the halls).

However, soon enough two heroes, Johnathan Morris and Charlotte Aulin, came to the castle to fight the evil within. They met with Eric's spirit there, although he did not identify himself properly, instead choosing to call himself Wind. It was through his guidance that the heroes gained the power to take on the many dangers in the castle. 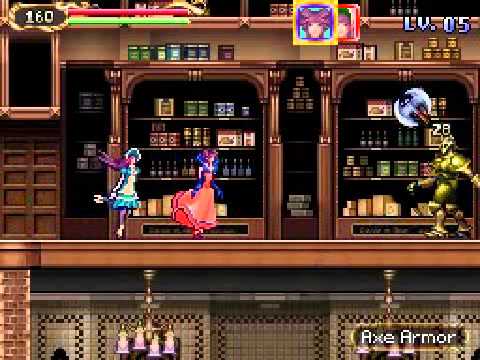 Soon enough they encoutered Stella who attempted to take the heroes on by herself (being the more headstrong of the two twins). This was against Brauners commands, as he didn't want to see his new daughters killed, but Stella did it anyway. However, the single twin proved no match against the young heroes and was soon defeated. Before Johnathan could swing the fatal blow, though, Loretta interceded, taking the two of them away, deeper into the castle. Johnathan and Charlotte were left with Stella's locket, which had a picture in it of Stella, Loretta, and Eric.

Going back to Eric, he explained who he was and who the two vampire daughters really were. Vowing to aid Eric, Stella, and Loretta, Johnathan and Charlotte tracked down Sanctuary, a spell of cleansing that could free the girls of the vampiric curse and uncloud their minds. In their encounter with the girls, the two heroes cast the spell, curing the twins. Once they remembered who they really were, Stella and Loretta vowed to aid the heroes in their fight against Brauner.

Firstly, the twins aided Johnathan by helping him unlock the true power of the Vampire Killer, which Johnathan had with him, unable to use it's true abilities. They then unlocked the way for the heroes so that the two, Johnathan and Charlotte, could venture deeper into the castle and finally face off against Brauner.

Outside, once Brauner was defeated, Stella and Loretta joined up with the heroes and Eric. They watched as Eric's soul was released, and Stella falling to the ground, blaming herself for her father's death. In the end, though, they were free of the curse and justice had been restored, the land free of vampiric evil once more.

Of course, as with most Castlevania games since Symphony of the Night, the only way to get the best ending is to meet the proper winning conditions. If you fail to save Stella and Loretta, killing them instead of casting the Sanctuary spell, you'll fail the game, getting an abrupt close of the game until you do things properly.

The first of the battles with the sisters is actually just against Stell alone. She'll float around the room, slashing with her sword who the heroes get close. From a distance, she'll also slash her sword, creating a power wind blast ("hurricane") that will travel across the room. She will also drop to the ground, causing a different wind attack to travel the floor ("furious wave"), before floating back up. Once damaged enough, she'll summon four crescent moons that will float, one at a time, towards the heroes. The battle can get pretty busy, but Stella telegraphs all her attacks, taking much of the damger out of the fight.

The following fight is pretty easy if you have Sanctuary. Just cast the spell, watch as it slowly build in power, and then the fight ends as the girls have been freed of their curse. Of course, you can attack the girls if you want (you monster!), and they will prove a formiddable challenge. Loretta will summon ice dragon heads that fly across the screen. She can also summon an ice storm from a dark portal, blasting shards downwards against anyone nearby. She has the ability to bring forth a giant shard of ice that she'll position and then Stella will drop on the players. Finally she'll summon a long ice shard that Stella will then use as a giant sword, slashing it before it breaks. If you choose to save the girls, you just have to keep them off Charlotte long enough for her to cast her spell, distracting the twins with Johnathan during the fight.

Playing as Stella and Loretta:

As with previous Castlevania games, there are multiple bonus modes you can unlock after the main game. Clearing the game properly will net you the twin daughters as playable characters, taking the two through their initial exploration of the castle. Stella summons swird slashes that will rake the screen where you poke at the touchsreen of the DS. Loretta, meanwhile, shoots pwoerful ice shards wherever you touch, doing a lot of conastant damage. As a bonus the two girls are constantly floating so you have free movement to take them anywhere in the castle, no need for double jumps or other items.