After the events of Castlevania: Symphony of the Night, the Belmont clan began to disappear. Although the games are hazy as to the exact details it is important to note that their disappearance created an unbalance in the battle of Good and Evil. Other warriors had to appear and pick up the mantle of "Vampire Hunter", and for the next two centuries the series follows these "other heroes" in their quest to protect the lands of Romania, and the rest of the world. 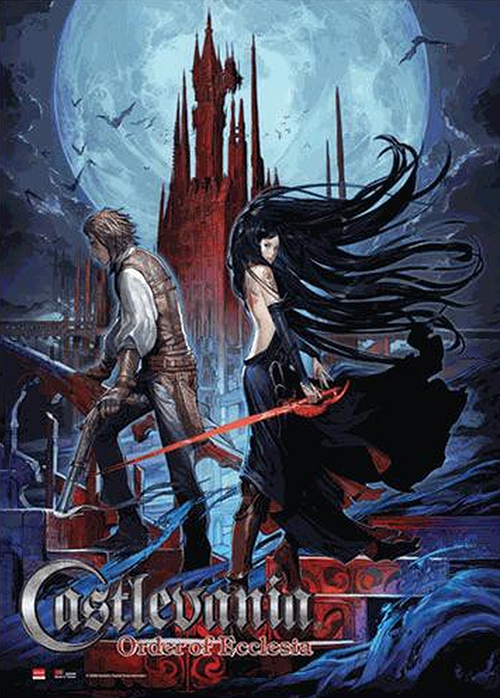 As the Belmont clan was disappearing a secret order of vampire hunters came to prominence. Calling themselves the "Order of Ecclesia," they derived their power from glyphs, spells the Order members absorbed into themselves and then cast, like magic. These glyphs gave the members of the order great power, making them a seeming force for Good that could battle the armies of Evil that still spread across the lands. The evil magic of Dracula was constantly ebbing a flowing through Romania and heroes were always needed to stop the minions of the Prince of Darkness.

One member of this Order of Ecclesia, the female vampire hunter Shanoa, was among the elite warriors of the Order. Powerful and skilled, Shanoa was entrusted with the most important missions the Order had. To this end, Shanoa was to gain possession of the "Dominus" glyph, a powerful spell that would supposedly destroy Dracula if he ever returned. On the eve of the ceremony to bestow Dominus on Shanoa, though, her best friend in the Order, Albus, betrayed the group and stole the glyph.

The interruption of the ceremony cost Shanoa her memories and emotions (making for a very quiet, emotionless husk of a main character). The order leader, Barlowe, tended to the girl until she awoke. He explained what happened before ordering the bewildered girl to go out, hunt down Albus, retrieve the glyph, and stop him from using it to resurrect Dracula. The fate of the world was at stake, he said, and Albus had to be stopped at any cost.

During her mission, Shanoa arrived in the village of Wygol where she found that the villagers had all been kidnapped by Albus (Albus supposedly using them for his own experiments). Thus Shanoa found herself venturing across the countryside, rescuing the various townsfolk while battling the forces of evil. Once she saved them all, she learned the full truth about the whole quest and what she was really doing for Barlowe: It seemed that Albus was trying to protect Shanoa (and the villagers of Wygol) from Barlowe. The Dominus glyph was actually an extension of Dracula's own magic, and if Shanoa had used it, the magic would have consumed her; had she died while casting the spell, her death would have aided further in the resurrection of Dracula.

It was further revealed that Albus was experimenting with the villagers because they were the last of the Belmont line and their blood may have made controlling Dominus possible. Sadly, Shanoa learned all this after killing Albus and taking the last part of the Dominus glyph from his spirit. More informed and better equipped for the final confrontation against Barlowe, Shanoa took him on and defeated him handily. Barlowe confessed that all Shanoa had learned was true, but his death assured Dracula's resurrection anyway. Fate sealed, Shanoa was forced to go to the newly re-awoken Creature of Chaos and defeat the beast within.

Battling past all the various foes and beasts in the castle, Shanoa reached the final room and confronted the Dark Lord reborn. After a furious battle, Shanoa cast Dominus, sealing the demon king again in his hellish afterlife. Albus's spirit returned, giving up his existence to protect Shanoa, saving her life from the effects of the spell. He proved, one last time, to be her true friend and companion, and Shanoa never forgot him or the sacrifice he made. Shanoa escaped as the castle crumbled, ready to take on any new challenges that might face her and her awesome power.

After this, all records of the Order disappeared (so, you know, forget you read this). Presumably no one ever tried to resurrect the order as other heroes eventually cropped up to continue the work of defending the lands against evil.

The exact date of this adventure is not currently known. Officially it happens sometime in the "Early 1800s", but before the events of Circle of the Moon (if that game is still even in continuity -- a matter of contention itself). Presumably it couldn't have happened too long before 1810, as Richter Belmont was still alive and active in 1797 AD (the time period for Castlevania: Symphony of the Night). 1810 seems like the safest minimum date the game, and its events, could have been set.

Shanoa appears in Castlevania Judgment as an unlockable character. There she is as she was for most of Order of Ecclesia, emotionless and with no memory, having been pulled out part way through Ecclesia and inserted into the events of Judgment. Her story in that game stated (when she finished her part of Judgment) that she would go back to hunting down Albus after her brief stint in the tournament.