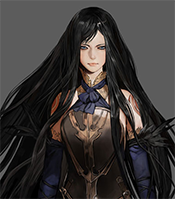 Released at the tale end of the Nintendo DS's life-cycle, Shanoa represents the last new hero/heroine introduced into one of the main Castlevania series. Since her game, Order of Ecclesia, the Castlevania series has mostly released hero compendium games (like Castlevania: Harmony of Despair) when not rebooting and creating a new timeline for the franchise as Lords of Shadow.

And while she then appeared in two more games, Shanoa was never memorable. Sure, she was powerful, but her whole characterization -- memory wiped and without emotion -- turned her into a kind of cypher, a blank slate of a character, not a living breathing creature.

She's a weird character to effectively close out the series with. While the first heroes, like Simon or Trevor weree cyphers due to the limitations of the system their games were released on (the NES), Shanoa's game is packed with story, but she's the blank center around which it travels.

We honestly don't know what Konami was thinking at the time, but in retrospect, seeing what the series has become since, the characterization of Shanoa is a really strange move that left her, and her game, less interesting because of it.

Raised from an early age by the Order of Ecclesia, Shanoa was trained as a holy warrior. Her mission, not unlike the Belmonts (a clan that has mysteriously gone missing recently), was the prevent the raising of Dracula at any costs. To that end, the order's master, Barlowe, suggested a ceremony to use a magical spell, the Dominus glyph, to bind the grave of Dracula, trapping the Dark Lord's soul for all eternity. During the ceremony, though, one of Shanoa's companions at the order, Albus (who she thought of as a brother), attacked her and stole the Dominus glyph. In the process, Shanoa's memories were wiped away, along her her emotions, leaving her a husk of her former self. 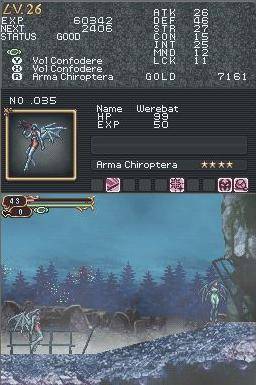 Fearing what Albus might do with the Dominus glyph, Barlowe sent the weakened Shanoa out into the countryside to track down Albus (and regain her powers along the way). During her travels, Shanoa came across Wygol village, a curiously empty location. As she explored she learned, from the last remaining villager, Nikolai, that the inhabitants of Wygol were imprisoned by Albus using the Torpor glyph. Nikolai tells her that she has to free the villagers (by completing quests) and that doing so is the only way to truly save the countryside (because, as we eventually learn, the village is full of Belmont decendants).

Exploring the countryside further, Shanoa encounters Albus twice more and each time he gives her one piece of the Dominus glyph (as gifts). A fated third confrontation is expected. However, before she could reach the Albus, Shanoa was pulled into a time rift...

We'll get back to Order of Ecclesia's story in a moment. We're forced to take a break here as Konami did something a little weird at this juncture: while many heroes show up in Castlevania: Judgment, Shanoa is the only hero pulled out in the middle of her adventure. THis causes a weird break in her history when you write everything down all at once, such as we're doing here...

As she appears in the future, Shanoa is confused about what's going on. Once she learns where she is, that she was brought to the future as one of the Heroes of Light so she could aid in defeating the evil Galamoth. Disinterested in this goal (since, remember, she's an emotionless husk currently), Shanoa's only real concern is getting out of the time rift and back to her quest to defeat Albus and prevent the resurrection of Dracula in her own time. 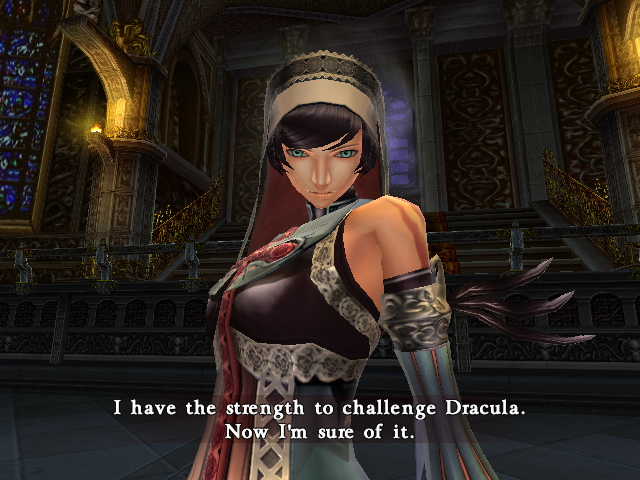 However, the only way for her to get back was to do battle in the tournament within the rift. Forced to complete her time here, Shanoa at least viewed it as a chance to square off against other heroes and test her mettle against many of the great warriors of the ages. United with her forces of Light, Shanoa helped to ensure Galamoth's defeat and she earned the right to go back home.

Trying to escape the rift she was forced into may not be the most interesting plotline for Shanoa, but considering that crap story other characters were given in this game (such as Maria's obsession with making her twelve-year-old tits bigger, a plotline that creeps us out every time we play the game), we'd argue that Shanoa gets out pretty well in the end.

It's worth noting that Shanoa definitely ends up in Judgment before her confrontation with Albus, but she has a glyph in her repertoire of moves that she could have only gotten after fighting Albus, a curious inconsistency. But then this game is full of inconsistencies, so what's one more for the pile? 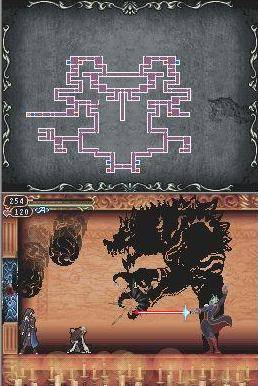 Back in her own time, Shanoa goes to confront Albus for the third and final time. Here, the two finally have their fated battle. Upon his defeat, Albus warns Shanoa of the power of the Dominus glyph: it's not meant to seal Dracula away but is actually an extension of his power. If she were to have used the glyph, Shanoa would have been sacrificed as a host to Dracula.

Knowledge in hand of where the true evil lies, Shanoa goes back to the Order to confront Barlowe. His true plan revealed, that he was actually a minion of Dracula working to ensure the Dark Lord's resurrection, Barlowe attacks Shanoa. She defeats her one-time leader, but the man gives up his blood, and soul, to ensure Dracula's return (even without the power of Dominus to command).

Shanoa then leaves the Order house, venturing to Dracula's castle for one last big battle. There, at the top of the keep, Shanoa confronts Dracula. During the battle, Dracula attempts to cast his ultimate magic but, with the union of the Dominus glyphs, Shanoa counters it and defeats Dracula. However, the Dominus glyph consumes Shanoa's life, killing her as well.

At the last moment, though, the soul of Albus appears, giving up his own enternity to save Shanoa. Her life restored, it was revealed that her memories and emotions had returned, too. She left Dracula's domain, alive once more and back to her old self. It's also implied that, sometime later, she went back to the Order of Ecclesia and burned all the books of the order, ending it's potential to do evil in the name of Dracula.

Like many of the Castlevania games before it, Order of Ecclesia features multiple endings. If you don't save all the Wygol villagers, Albus doesn't warn you about the dangers of Dominus. When you go back to the Order house, thinking your quest is over, Shanoa is then consumed by Dracula's soul. You then get a lovely Game Over screen for your troubles.

Of course, there's also an alternate mode you can unlock for the game after clearing it, Albus mode. Here you play as the Order defector as he tries to stop Dracula's resurrection by any means necessary. However, this mode, like many alternate modes in previous games, is light on story and most there as a kind of "hard mode" for you to play through.

Shanoa is one of the starting characters in Castlevania: Harmony of Despair, her one non-continuity appearance so far. Of course, this whole game is a flight-of-fancy, non-continuity adventure, so nothing that happened in the game actually had any effect on the greater continuity

Shanoa is able to equip multiple glyphs in Order of Ecclesia and mix and match the various attacks to suit whatever play style the player likes. This makes them a lot like the souls from Aria of Sorrow that Soma uses (although, of course, the story behind them is differnt based on the two games). With her ability to use glyphs for attacks, as well as glyph spells, and exploration glphys, Shanoa is a weird comination of Soma, Belmont, and Belnades all at once.

For her appearance in Judgment, her selection of attacks was greatly stripped down. She was an unlockable character in the game, and the attacks she came with had a lot of range and strength, making her well worth the effort it took to gain her.

Finally, Shanoa reappeared in Harmony of Despair. Although her selection of possible glyphs and abilities was once more pared down from her original game, she still had a nice selection of abilities to mix and match. Plus, since she was one of the starting characters in the game, she could be use to great benefit early on without any purchases necessary. Strong and capable, she was well worth using in the game.