As covered in the article detailing the events of Castlevania: Order of Ecclesia, the Belmont clan began to disappear following the events of Castlevania: Symphony of the Night. This forced one of the Belmonts (no one yet knows who) to pass the Vampire Killer whip off to a trusted friend for safe keeping. The whip was then passed through the line, from Master Hunter to Trainee, much like it was within the Belmont clan before.

In 1820, Dracula appeared again. Although there is no game specifically tracking this event (yet, and there likely never will be), the events are detailed in the opening text of Castlevania: Circle of the Moon. Morris Baldwin, wielder of the Vampire Killer (aka the Hunter's Whip), went to Dracula's castle, alongside the parents of Nathan Graves, themselves trained vampire hunters, and destroyed the vampire. Morris survived, the Graves hunters died, but Dracula was set in the ground... for a short while.

As these events are set only 10 years before the events of Circle of the Moon, when Dracula is raised by his followers again, he still remembers Morris Baldwin quite clearly. Part of his plan is revenge on Morris for the Dark Lord's earlier defeat. 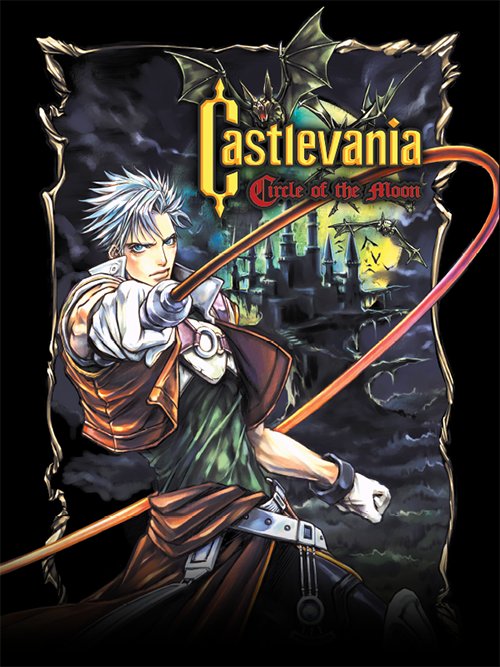 Morris Baldwin, with his two trainees, Nathan Graves and Hugh Baldwin, invaded the castle of the evil vampiress Carmilla intent on stopping the sorceress from bring the Dark Lord back to life (as all of his minions are want to do time and again). Upon reaching the ceremonial chamber, though, they found their efforts had come too late: the Dark Lord had been reborn, although he still needed time for his magic to fully rebuild.

Dracula, confronted by three trained vampire hunters, destroyed the floor beneath our heroes, plunging Nathan and Hugh down a long, vertical shaft, leaving them to (presumably) die in the catacombs of the castle. Morris stood alone against the vampire, one old man to become the Dark Lord's plaything. He desperately needed help, for his trainees to still somehow be alive so they could climb back to the top of the castle and aid their captured teacher.

In the basement, Hugh and Nathan were, indeed, still quite alive. The fall had been long, but they were trained heroes and had survived worse. The two fought, though, with Hugh claiming the right to destroy Dracula even though Nathan was the one who had gained the right to wield the vampire hunting whip (called the "Hunter's Whip" in this game, although presumably it was the Vampire Killer). After a long argument, Hugh stormed off leaving Nathan to explore the castle alone and, hopefully, find a way to the top of the castle on his own.

Battling through the long and lengthy halls of the castle, Nathan developed his power further, gaining the use of a collection of magically enhanced cards, ten for the elements and ten for the ancient gods, which, when combined, gave him a host of magical abilities. Using these, he fought his way to the top of the castle, only to face off not with a monster by with Hugh, brainwashed by the evil countess Carmilla and turned to the darkness.

Hugh, enraged at the fact that Nathan had gained the Hunter's Whip, was swayed by Carmilla's magic and Dracula's power, the Dark Lord influencing the trainee's rage until the Dark Lord had another minion in his service. The two vampire hunters fought, a battle of near equals. Nathan, though, emerged victorious. He didn't kill Hugh; instead, the felled hero came to his senses and swore off his need for revenge. Hugh acknowledged Nathan as the better warrior and agreed to stand aside while Nathan carried out the quest against the vampire Prince.

Fighting through the last halls of the castle, Nathan reached the central ceremonial chamber once again. There he faced off against a stronger, more dangerous Vampire Master. Hero versus villain, Nathan fought Dracula tooth and nail (and heart, rib, and ring, if you want to finish the Castlevania II reference). While the two foes battled, Hugh freed his father, Morris, and the two escaped the castle. Eventually, after a long and arduous battle, Nathan defeated the Dark Lord and made his escape as well, the castle crumbling as the evil within was dispelled.

As mentioned above, the whip used in this game is the Hunter's Whip, not the Vampire Killer. It can be assumed that the two whips are one and the same as the Hunter's whip never comes up again and there is a known history, in the series, of the Vampire Killer passing from the Belmont clan to other caretakers, like the Baldwins, for a time.

The Baldwin clan is never heard from again after this game, nor is any mention made of Nathan in later games. Konami, under the guidance of series lead IGA, had removed Circle of the Moon from continuity for a time (although more recently sort-of added it back in). Some speculation (and some actual quotes backed this up) was that IGA was not a fan of the game and felt it was unnecessary in "his" version of continuity.

This game was the first "sequel" to the Metroidvania formula of Symphony of the Night. Much like in Symphony, our hero ventures back and forth through a large castle, collecting experience, items, and spells all to aid him in his battle against the Dark Lord. The play formula didn't diverge much between the two games, although each does have differing play-styles, partly because of the fact that Nathan is a whip-wielding hero, and partially because of the heavy emphasis of the spell system in the game (spells weren't as important in Symphony of the Night).

The spells system in the game is called the "Dual-Setup System" (DSS for short), a collection of ten cards representing Elemental Animals, and ten cards representing the Greco-Roman gods. The two sets could be paired up, one-to-one, for a selection of effects. Pairing Mercury (whose card applied effects to Nathan's whip) with Salamander (the animal of Fire) gave Nathan's whip a fire effect. Each of these two card combinations (one god with one animal) gave Nathan a different spell effect he could use, but only one effect could be used at a time.

This was an interesting and bold spell system although it was not without its faults. Although many of the spell combinations were interesting, few proved very useful. Additionally, the cards were hard to collect, seeming to come from an odd smattering of monsters (as random kill-drops) throughout the castle with no rhyme or reason to how you gained them or why they were carried by those monsters (as an example, the Serpent card -- Ice Serpent, so power over ice -- could be gained early in the game from an Earth Demon, since Ice and Earth are so closely related, of course).