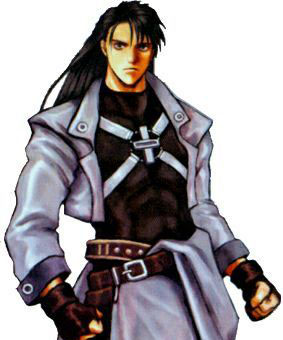 Although there had been a couple of games that focused on characters outside the Belmont clan, most of those characters (like John Morris and Reinhardt Schneider) were are least distant relatives of the family. Not so with the Baldwin family. The Baldwins were the first hunters represented and given their own game that were not part of the clan, or cousins, or even roommates of the clan.

Keepers of the Hunter's Whip (maybe a whip other than the Vampire Killer, but more like just another name for that famed whip), the Baldwins rose up to defend the world against Dracula and his evil when the Belmonts mysteriously disappeared around the turn of the 19th century. They become their own clan of heroes but, as per the game's story, Hugh was not the most worthy member of their clan. Heck, the most worthy person to take the Hunter's Whip wasn't even a Baldwin but another trainee, Nathan Graves.

And, yes, this really irked Hugh. Some might say he was more than irked, going right past agrieved and stright to perturbed. He was that mad.

Trained from a young age, Hugh Baldwin was the next in line to take over the Baldwin clan, a famed group of vampire hunters (you know, the most famous if we discount the Belmonts, and the Morrises, and the Belnades, and...). He knew early on that one day he'd inherit the family's powerful relic, the Hunter's Whip, and that it would be his job to eventually take on Dracula and save the world. This was his duty, his birthright.

And then Nathan came along. Nathan! The son of a pair of vampire hunters, Nathan was orphaned when those hunters died fighting Dracula, a quest that Morris Baldwin (Hugh's father) was also part of. Morris took Nathan, raising the young boy and training him in the ways of vampire hunting. When both Hugh and Nathan came of age, Morris judged Nathan to be the better hunter, both in technique and temperment. Hugh was, of course, furious. 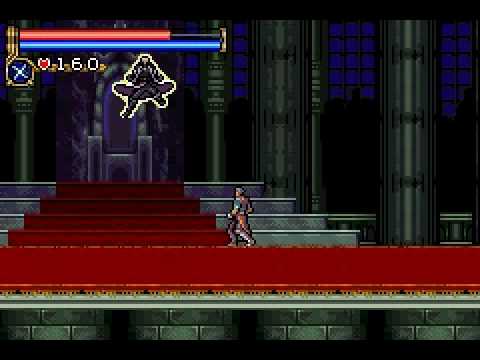 When Dracula's castle returned, Hugh knew it was a good time to show his father, and Nathan, that he was the superior vampire hunter. Unfortunately for all three of the heroes, when they stormed into Dracula's chamber within Carmilla's castle, the vampires were ready for them. They captured Morris and cast Hugh and Nathan into the deepest depths of the castle where, presumably, the young heroes would die. Hugh, needing to prove himself to his father (and show up nathan in the process), stormed off declaring himself the better hunter and that Hugh would only get in the way.

Unfortunately for Hugh, while he was powerful he wasn't able to take on the strongest monsters the castle threw at him. Fighting his way up the castle, Hugh was able to reach the top of the Chapel, only to be bested by the guardian there, Adramelech, a hideous goat beast. Nathan, however, easily defeated the monster, showing up Hugh once again. Hugh stormed off, leaving Nathan puzzled once more.

After this defeat which Hugh blamed on Nathan, he was despondent. That was when Carmilla swooped in. She lured Hugh in with promises of power and glory, swaying the vampire hunter and converting him to her cause. This led Hugh to take on Nathan at the very top of the castle, a battle of the vampire hunters. Hugh brought all his skills to bear, including his own collection of DSS abilities he'd been given by Carmilla. Unfortunately for the hunter, he was still unable to take on Nathan. He was defeated but, once resoundly put down, he snapped out of his evil daze. Swearing to Nathan that he wasn't going to try to stop him, he sent Nathan on to save their master, Morris, and save the day.

In the end, after Nathan had gone on to defeat Dracula, the three hunters watched outside the castle as it slowly crumbled. Hugh had learned that he wasn't the best and that he had to stop blaming Nathan for his own inadequacy. In the end, a good lesson for the man to gain.

Despite being the type of character that would normally get their own sidequest in a Castlevania game (see: Richter Belmont, Maxim Kischine), Hugh was not given his own quest through the game. While there were alternate modes for the main game, they all focus on Nathan. There are fan mods that put Hugh in a lead role for the game, but he was never given his own official quest in any of the games.

Hugh is very much a mirror to Nathan, another vampire hunter with similar capabilities. He'll attack at Nathan with his sword, as well as the holy water, axe, dagger, and cross sub-weapons, giving him a full compliment for his arsenal (skipping only the stop watch that Nathan has, which would otherwise make him way too powerful). he also attacks with a fiery sword attack, as well as two columns of flame he can summon, all to try and eliminate his foe. Even at this phase of the battle, Nathan can be tough, so it's worth noting that there's a fairly safe spot at the upper corner of the room you can hide in, if need be, to heal up and take a pause.

Once Hugh is low enough in health he'll go into his ultimate mode, turning on his DSS abilities. This grants him the power to throw out two sub-weapons at once, as well as enabling a powerful sword attack, unleashing multiple swords at once. Hugh is powerful and deadly and make take some time for you to defeat.

Although Hugh seems to not be named for anyone from history (or mythology), near as the fandom can tell, amusingly there is an actor that shares his name with the vampire hunter. An Australian actor, Mr. Baldwin starred in a few low-budget productions from the mid-to-late 1990s before mostly dropping out of acting altogether.