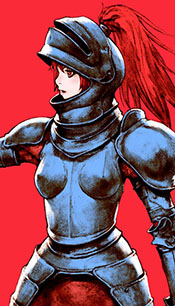 The Old Axe Armor is a curiosity in the Castlevania series. Starting off as just an enemy, the Axe Knight, this opponent was initially just a riff on the classic Axe-Men that had appeared in the series since the very first game. In fact, armors of all kinds of have been mainstays of the series, showing up in various forms and varieties (with and without axes) in pretty much every game the series has produced.

However, while armors of all types have shown up, the "Old Axe Armor" speaks to a specific type of enemy: the Axe Armor. While the term was first used for an enemy in Castlevania for the X68000, the common form we recognize was first glimpsed in Castlevania Dracula X: Rondo of Blood. While that version proved to be formiddable, requiring a certain amount of skill to defeat over the standard Axe-Men, its later inclusion in Symphony of the Night was more of a joke. There, the Old Axe Armor turned Alucard into a Axe Armor (when worn), a strong, but ultimately limited character (Alucard also gave out a confused "What!?" every time he transformed).

As a one off joke, the Old Axe Armor was good for a laugh, but the character turned up repeatedly from there. Variants of the Axe Armor, (now often called "Axe Knight") appeared in several games after Symphony of the Night with the enemy class replacing the original Axe-Men. Axe Knights became so unbquitous, with so many variant designs, that when the original Rondo of Blood version showed up again in Portrait of Ruin, it had to be referred to as the "Old Axe Armor" (as opposed to the current Axe Armor, which was a different enemy).

Like many references in the series, then, the Old Axe Armor has grown to be a loving little tribute to the high-points of the series, little tips of the hat from series leader Koji Igarashi to the fan. It's moments like these that show the series has a bit of a humor about itself, all these years later.

Officially the Axe Armor didn't have a backstory of any kind until Portrait of Ruin, and even then it was simply to describe them as, "a veteran zombie warrior wearing antique armor." From that description, though, we can derive a bit about the Axe Armor. For one, due to how many of them show up through the game (sometimes multiples at once), we can infer that there's more than one zombie warrior populating the halls of Dracula's castle in antique armor.

Why is it important to note that there are multiple zombie warriors? Because that means that, over time, multiple adventurers have gone to Dracula's castle to try and stop the undead fiend and failed. Think about it: how else would Dracula end up with a cadre of undead veteran warriors? Obviously people go to the castle to try for fame and fortune by taking down the Dark Lord. Only a select few, though, have managed to do the deed (and most of them are named "Belmont").

Additionally, that means the Axe Knight armor has its own magical properties and just about anyone can be slapped into it and use those limited powers -- otherwise, why would they all act the same? As we will see shortly, this bit of logic is actually born out by the next game in the series...

It's worth noting that Rondo of Blood had a Super Nintendo remake, Dracula XX, and the Axe Armor showed up there as well (looking and acting exactly the same). This makes a certain amount of sense, as many of the enemies from Rondo were reused for the SNES version.

Also worth mentioning is that there was a red variant of the Axe Armor simply called the "Red Axe Armor". As detailed in Portrait, this zombie warrior fought in blood-drenched armor, presumably powering its immortality. Like all "red" enemies (such as the Red Skeleton) Red Axe Armors are never really killed -- when defeated, they fall apart, but will eventually reassemble themselves.

The Axe Armor appeared again in the sequel to Rondo, Symphony of the Night. There, though, the Axe Armor was a different enemy from the one we're discussing. Bigger and bulkier, that Axe Armor came in Green (Lvl. 4) and Blue (Lvl. 9) variants, with higher level variants taking the moniker of "Armor Lord". The Axe Knight we've come to know and love, though, was more of an easter egg.

In the game, Alucard could find Axe Lord Armor. Despite the name, the armor didn't give Alucard the abilities of an Axe Lord. Instead, the Axe Lord Armor physically turned Alucard in the classic Axe Armor. This version was very limited -- he had the ability to swing his axe, move ludicrously fast, but he had almost no jump height whatsoever. While amusing as a lark, the Axe Lord Armor was not practical.

It should be noted that the Axe Lord Armor could be unlocked, by default, in Alucard's inventory after beating the game once. Like with Richter Belmont (for Richter Mode) and Maria Renard (for Maria Mode), entering AXEARMOR as Alucard's name on file select screen would unlock Old Axe Mode, letting Alucard wander around from the start in the Axe Lord Armor.

It was in Portrait of Ruin where some confusion over the Axe Armor came about. First, to actually get the Axe Armor to show up, you had to play through the main part of the game and get to the end-game content (with the last four portrait worlds to explore). There, Old Axe Armors (as they are now known) would appear, and if the player killed 1000 of them (yes, one thousand) they would unlock Old Axe Armor mode once they defeated Dracula. Sure, nothing confusing so far...

What's weird, though, is that the playable Old Axe Armor was female. This is a literal fact -- certan enemies would react differently in the game depending on if you had a male or female character in play. If you've played the game then you know that one boss, Astarte, could literally take over male characters, making them meer puppets to her will -- if the Old Axe Armor were male, this boss would be all but unbeatable, so making the character female was a necessity. Strangely, though, the armor speaks using Johnathan's voice, making it seem like it was male.

So which gender is the playable Old Axe Armor? Well, officially from Konami the character inside the Old Axe Armor is female (which you can see above in the portrait we presented for her -- we also have a larger version of the image available). This is why we qualified above that characters inside the Axe Armor (Axe Lord Armor, Old Axe Armor, call it what you will) take on the traits and powers of the Axe Armor. The unnamed female in the Old Axe Armor is a girl, but she acts and talks like a male version because the magic of the armor would seem to be that strong.

It interesting to note that the Old Axe Armor mode is the only version of Portrait of Ruin to not feature two playabale characters at the same time. One fan theory proposes that there are two characters in this mode -- the girl inside the armor and the armor itself, one female and the other male. Whether or not that's what Konami was intending, it is an interesting thought.

The Old Axe Armor does show up in Harmony of Despair. Normally players will encounter it as an enemy to fight. Amusingly, though, they will also show up as "playable" characters, just not in the normal way. Despair featured downloadable characters, and any player could bring their characters into any other game. If the other players didn't have those characters downloaded it didn't prevent them from all playing together -- any players without the characters downloaded would, instead, see and hear the Old Axe Armor. It was a ncie touch from Konami and a neat way to ensure no one was penalized if they didn't buy everything.

Playing as the Old Axe Armor:

Although the Axe Armor has shown up multiple times (and, if we count all the variants of it, such as Axe Lords, Axe-Men, and Axe Knights, they've shown up in just about every game in the series), the Old Axe Armor has only been playable twice. The first time was in Symphony of the Night. There, the Axe Lord Armor would tranform Alucard into the Old Axe Amor when worn, giving him increased strength and movement speed, but drastically limiting his jump height. In this guise Alucard is unable to regenerate his MP, but he's also unable to use any of his other powers. It's a very limiting mode, a lark to play through but not an effective way to explore the castle.

The later Old Axe Armor Mode from Portrait of Ruin made the Old Axe Armor into a more playable character. For its second outing, the Old Axe Armor gained a couple of sub-weapon attacks -- a throwing axe that traveled along the classic arc, and a puppet that would transport the Old Axe Armor to wherever the doll landed when thrown. The Old Axe Armor also gained a variety of special attacks (ala Richter's matrial arts moves) including a high jump to aid in exploring the castle. Unfortunately, the Old Axe Armor was seemingly made of glass as the character was unable to take much damage without dying -- this mode was made with expert players in mind.