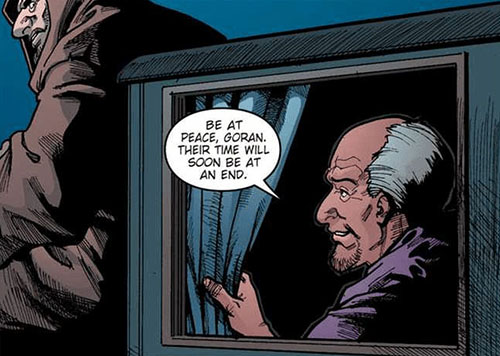 The cult leaders dedicated to the resurrection of Dracula (which has to feel like a full-time job considering how often Dracula is defeated by heroes) are probably almost as famous as their dear leader: Carmilla, Death, Elizabeth Bartley, Shaft. These are the dark magicians and witches who work tirelessly behind the scenes to gather their followers, readying the magics, preparing for he right time to bring back the Dark Lord once more.

Curiously the 20 comic series Castlevania: The Belmont Legacy uses none of these cult leaders. Instead of makes two new followers of Dracula, Ivan Bartley and his niece, Sona. These are characters that had never appeared before (and, presumaly because they were created for the comic and are tied up in those rights, will never appear again). In fact, none of the usual suspects you'd expect arrive in this comic, leaving Ivan and Sona to carry on the cause of Dracula. It's a thankless job considering the disdain Dracula has for mortals.

Honestly, of the two cultists, Ivan is vastly less interesting to talk about. He only appears in a brief handful of scenes, from his first introduction where he very loudly, in the village square, talks about how, "one day Dracula will rise agan." He then, later, performs a Black mass ritual with his niece, bringing the dark lord back through magic and blood. And then, as he's celebrating his success, his niece seizes power, thrashing the mn beore stalking off to toy with her "love", Dracula.

After that, Ivan is never seen again. Presumbly he lived on, though, due to his last name. Someone had to live to continue the Bartley name (his niece, Sona, quickly became a vampire so her was in no place to do so). he doesn't die on page, that's certain, but his ultimate fate is left up to the imaginaton of the readers.