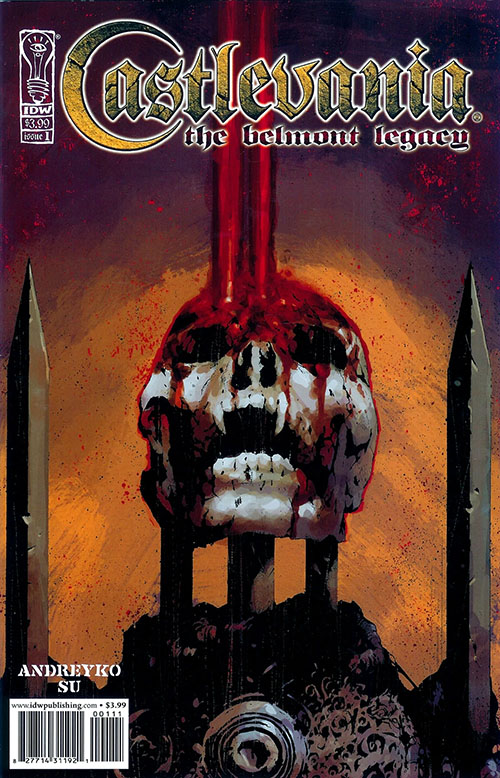 When it comes to the heroes of the Castlevania series some are treated much better than others. Although there are plenty of games, stories, and shows for the Simons, Trevors, and Richters of the saga, other Belmonts don't get nearly as much love. Forgotten and ignored Christopher Belmont has been around since the early days of the Castlevania series, but you'd hardly know it from how little he gets used now. He didn't even get to cameo as one of the "Greatest Five" in Castlevania: Portrait of Ruin.

At one poin there was some push to change that. In 2005 a five-part comis series was published by IDW starring Christopher himself. This comic was a creative retelling of Christopher's first game, inspired by but not beholden to the Game Boy adventures of our fair hero, The Castlevania Adventure and Castlevania II: Belmont's Revenge. I won't deny that when this comic came out the deviations it took from the source material left me feeling a little cold. The comic adds in all kinds of charcters and lore that not only weren't in the Game Boy games but also didn't really show up in the main series, either. And yet, the years (and the release of the Netflix animated series) have been kind to this comic. Authors taking liberties with the series' lore doesn't seem as bad as before, and that allows me to cut some slack for this comic.

Make no mistake: this comic isn't good. It's rushed, clumsy, and often at times features just plain bad storytelling. And yet, at the same time, it does try. Castlevania: The Belmont Legacy is like a happy five-year-old, just wanting you to read it as it goes on about heroes and vampires, smashing its toys together. It's bad but endearingly so, which is a much nicer review of the comic than I how I used to feel about it, that's for sure. It's still hard to recommend this book, but someone looking for a new take on Christopher's story might at least enjoy a quick peek at these illustrated pages.

In the book we meet Christopher on the eve of his wedding. He's to be wed to the lovely Illyana Riktor, a woman he's been courting these past few months. Although much of the town (which Christopher rules over as the Lord Protector) seemshappy with the coming nuptuals, two members of the Bartley family, Ivan and his niece Sona, wish for nothing more than death and ruin to befall the Bemont clan. They are worshippers of Dracula (a fact they are surprisingly open about) and, secretly, they have plans to resurrect the Dark Lord on this, the 100th anniversary of his last defeat (although it's not said, that defeat would have presumably been at the hands of Trevor). 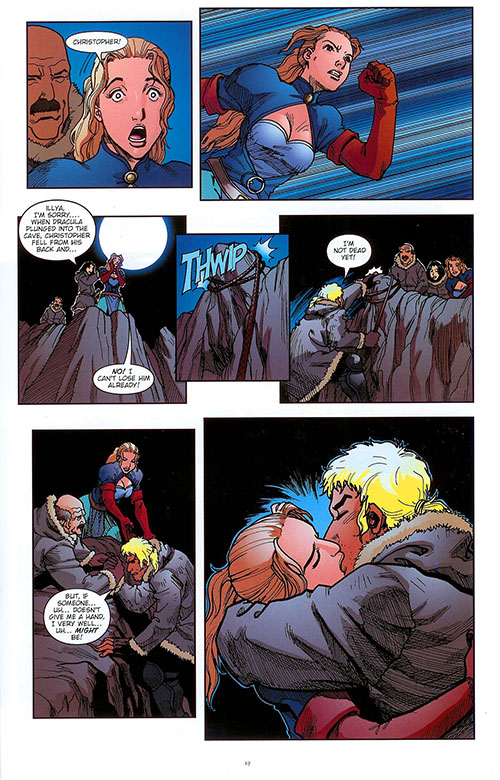 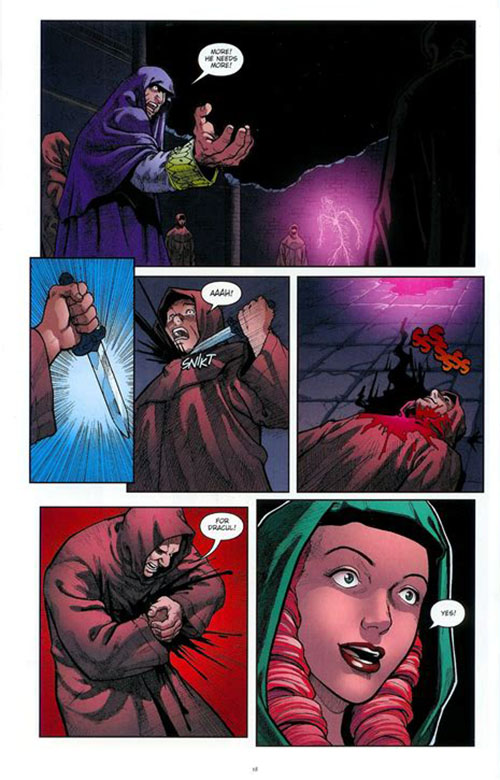 The evil guys ressurect Dracula while the good guys get married, and soon enough Chris and Illyana's honeymoon is ruined with rhe news that the Belmont family crypt had been desecrated. Only one being would have the desire, and the strength, to break open the tomb and smash its statues: Dracula. When the Totyan family of Romani arrives in town, carrying the powerful whip the Vampire Killer (as they are the protectors of the whip when it is otherwise not needed) they give Christopher the relic he needs to fight evil. He takes up arms, and gathers his men, and heads off to the ruins of Dracula's castle to send the vampire back to his grave. Christopher's wife, though, isn't happy, not because she wants her husband to stay but because she wants to be in the fight with him. No blushing flower, she heads off on her own to find and kill the vampire... only to end up captured instad. Now Christopher has to save his beloved and kill he vampire king before darkness spreads across the land for good.

Having watched the Netflix series start-to-finish I don't hate the fact that this comic adds a bunch of characters and details that wasn't in the original Game Boy Adventure; it pretty much had to as that portable title is about as story-light as you could possibly get. Giving Christopher a wife, someone to fight for (and alongside) is a solid addition. Having other characters for him to talk to is also good, and it makes sense in the bounds of the written page. I didn't even hate the Romani characters, there to have the whip and exposition about it. It doesn't properly tie into "real" continuity but, like the anime series, this comic book sits apart. It's fine.

I do think where the series misses the mark is in actually using its characters properly. Beyond loving his wife and wanting to honor his family there's hardly any character to Christopher at all. We don't know what kind of lord he is, if theres some reason why the villains of the story (Dracula excepted, of course) want to ruin the Belmont name. There's no color of shading to the hero and his quest. That's fine in a video game where you're getting a ton of action to distract for the shallow (or completely lacking) story, but here where we have to view everyone as charaters, and there's dioalogue and text, the main hero can just be a void. he needs depth and shading and Christopher lacks all of that.

Illyana fairs a bit better, just because she's a brassy dame who goes of on her own, taking no prisoners. Well, until she's taken prisoner. This is another spot where the book does stumble because the second Illyana goes from heroine to bait she stops being a real character. The series tries to cover for this by giving the other characters -- Pascha, Gaspar, and Viktor Totyan, as well as Christopher's man-servant Deimos -- things to say, but they are still shallow, under-baked characters that deserved more time and more fleshing out. 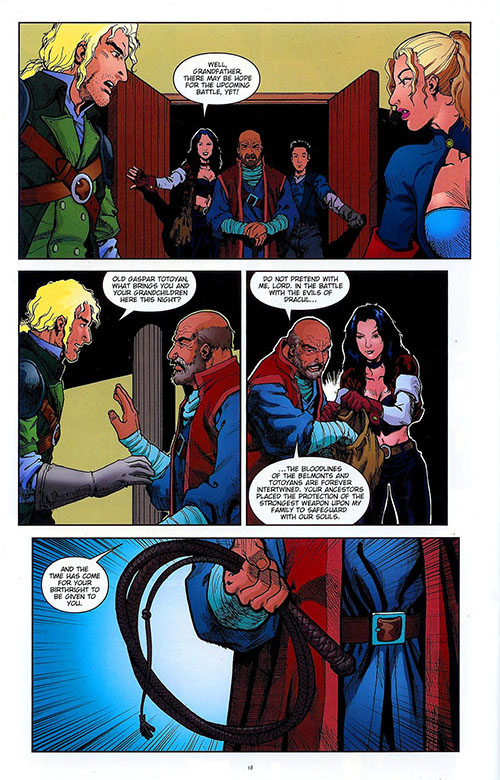 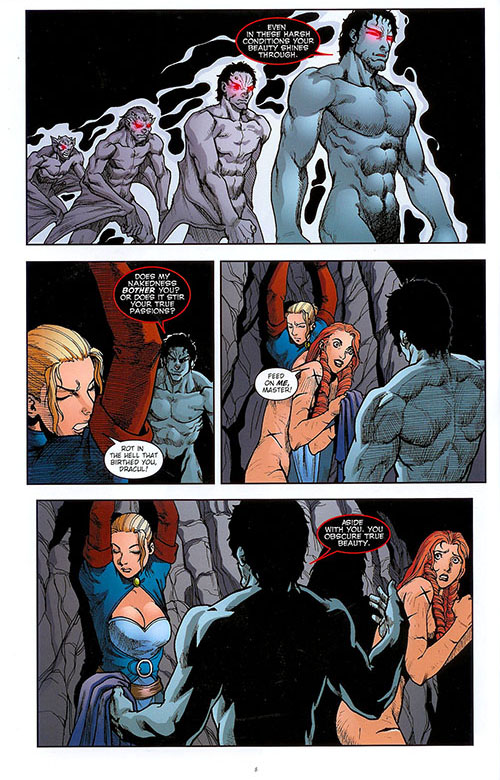 Worst served, really, are the villains. In concept I like having to characters to latch onto as Dracula's flunkies, and Ivan and Sona certainly could handle those roles well. There's even a bit of battle between Ivan and Son as she steals the power of their cult (which is really just the two of them) and works to be Dracula's vampire bride. Weirdly, once Sona seizes power Ivan disappears from the story. And then as soon as Sona gets what she wants, Dracula tosses her aside and she loses all her story as well. oth start the book strong but end up barely being factors in the comic at all.

That's not to say that the creators, author Mark Andreyko and artist E. J. Su, don't try. Therea arelittle details, references to the past Belmonts sprinkled through the story. It's all complimented by some really nice looking art, a stylized illustrated form that actually works really well. It evokes the classic Gothic horror films of past decades without deviating too far from how you expect a Castlevania story to look. Really, were the man plot better, and less rushed, this comic could have been a really attractive purchase for any fan of the series.

Although the comic hints at a possible continuation none was forthcoming. I can't say I'm surprised; I hated this book when it came out and it seems like most fas didn't really take to it either. It's not bad, but back in the day, when this came out, Castlevania had a tight and organized continuity without any reboots or real side-stories. That's changed, of course, and that's helped soften perception of the book now, but even with all that being said the story itself just isn't there. This is a shallow adventure that introduces a lot of characters and a big, epic settng and then squanders it all. While it's not the worst comic I've ever read it's not great. Having now read it twice I seriously doubt I'd ever revisit it again.