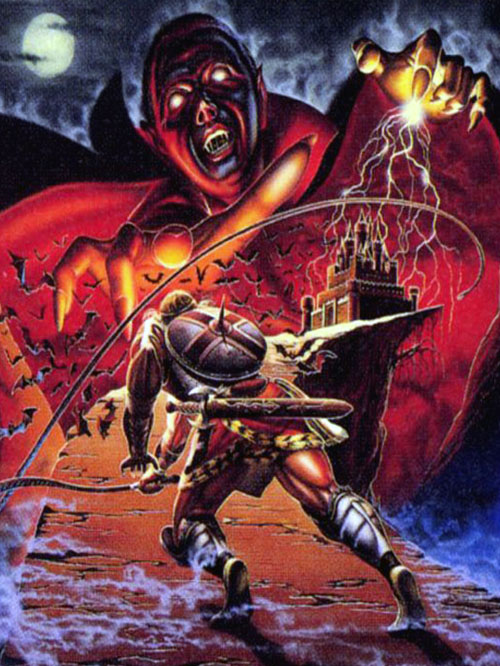 100 years after Dracula's defeat at the hands of Trevor Belmont, the night grew chill and the hours seemed long. It was on that fateful night, 100 years to the day, that the Dark Lord came back again (well-rested and a touch peckish). His castle appeared high up on the precipice of the Borgo Pass, and his minions and monsters flooded out into the Romania's countryside. Dracula had designs to take over Romania (and eventually the world) and refused to let anything get in his way.

Except, of course, there was a Belmont ready to kill the evil vampire and send him back to the grave. Christopher Belmont, heir to the clan, readied his trusted whip, the Vampire Killer, and set off to Dracula's castle. He found many monsters and demons lurking in the forests outside the castle, and he knew what he had to do: fight the fiends with ever last ounce he had until the land was cleansed.

The battles were fierce and the dangers numerous. The hunter battled his way through the castle, taking on the various beasts he found within, while dodging all manner of traps and perils. Finally, he reached the top of the castle where he faced off with the Dark Lord. It was a furious battle, man against monster, but it ended with Dracula crumbling to dust as the hero stood victorious. The Dark Lord was defeated and Christopher could return to his home, satisfied in the knowledge that Romania was safe from Dracula's evil influence once more.

This game is a solid illustration in why old NES manuals could never be trusted. The manual for this game in the U.S. was vague about who was fighting Dracula but the implication was that this game took place after the two games featuring Simon Belmont, setting this up as an allegedly a sequel. In Japan, though, this game was always intended as a prequel. It's actually the first to establish (via the Japanese instruction manual) the fact that Dracula comes back every 100 years, thereby setting the game over 100 years before Simon's era.

Really, the misconception wasn't cleared up definitively in the U.S. until the Internet made it much easier to share information with the greater fandom. Sites, such as the Castlevania Dungeon helped to clear up the general order of games and how the Castlevania timeline fit together. Then Konami put out their own timeline during the tenure of Koji "IGA" Igarashi, and that helped to permanently settle matters for all mainline entries in the series. Chris's adventures took place between Trevor's and Simon's, and that was that.

A comic book very loosely based on the Christopher games was released in the Spring/Summer of 2005. The comic, titled Castlevania: The Belmont Legacy, was supposed to give a more detailed story of Christopher's time as the Belmont heir. Sadly, it did very little of that, and had almost nothing to do with either Christopher-staring game aside from there being a hero named Christopher Belmont and that Dracula showed up at one point.

In all honesty, the plot of this comic is more of a reinterpretation of Haunted Castle, an arcade game made by Konami that has no official place in continuity (it more or less exists as a reinterpretation of the first Castlevania game). In that arcade game, a big, buff Simon goes to Dracula's castle to defeat the Dark Lord. The motivation, though: Dracula kidnapped Simon's bride-to-be. Similarly, the plot of Castlevania: The Belmont Legacy is about how Dracula, back from the dead after a previous defeat at Christopher's hands, elects to kidnap Chris's bride-to-be. Chris gives merry chase. The two battle it out, and Dracula dies.

If you're interested, more information is provided elsewhere on the site, but we don't recommend anyone tracking down this odd little comic. It's really not good at all.