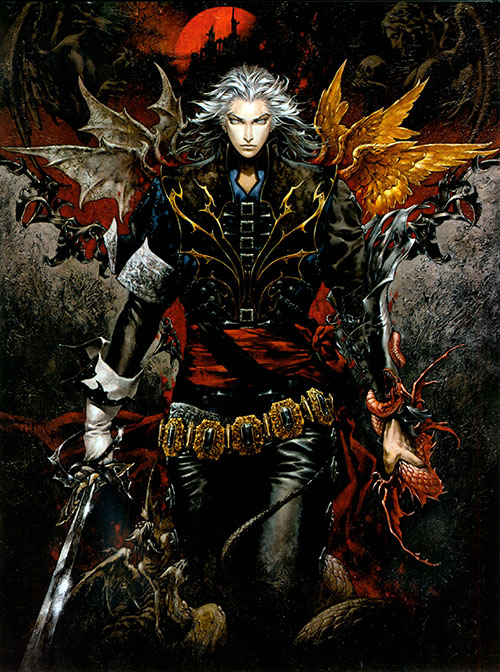 In the three years following Dracula's defeat at the hands of Trevor Belmont, the lands under the Demon Vampire's control still hadn't recovered. Demons, devils, and nasties still roamed the lands, and the curse of Dracula's darkness still hung heavy over the territory. For the townspeople of Romania, it felt like the evils of Dracula would never truly vanish from the world.

It was within this time that one of Dracula's followers, a devil forgemaster (a mortal that crafts demons, and then trains them, to serve in Dracula's armies), Hector, had left the evil vampire's domains for greener pastures. Hector, having apparently decided that the whole "being evil" shtick wasn't all it was cracked up to be, left to make a new, less-demonic life for himself. He went out, got married to a nice (former nun) named Rosaly, and started up a good life together. (Probably forging non-evil demons for domestic use, on, like, farms. Farm demons.)

But this is a Castlevania game (and, as we at the Inverted Dungeon have noticed, women get the short end of the stick in this series), and so eventually, after am idyllic time with his wife, she was killed. Another forgemaster (and fellow co-worker of Hector's), Isaac came into town to track down Hector and motivate the man, through any means necessary, into rejoining Dracula's flock. Isaac felt that Hector never should have left the fold, and his big plan was to kill Hector's wife to lure Hector back to the Demon Castle.

And sure, it worked... if only so that Hector could wage unholy vengeance on Isaac. Hector traveled through the lands of Romania, searching for his wife's murderer. This put him in direct contact when the leftover armies of the damned, which he cut through, taking their bits to forge new devils to aid him in his own quest for blood. Along the way he also came into contact with Trevor Belmont, the hero who had put Dracula in the ground. Although at first they fought, as Trevor didn't trust the former lieutenant of Dracula's armies, they eventually formed a kind of truce, agreeing that preventing Dracula's resurrection was the best course for the world.

Hector also encountered Julia Laforeze, a witch who provided help and assistance along Hector's journey (who also bore a striking resemblance to Hector's lost Rosaly). Julia had her own secret, that she was actually Isaac's sister and she was venturing across the Romania looking for her own way to, safely, stop Isaac and turn him from the path of darkness. However, as she watched the battles between Hector and Isaac, and learned of the depths of Isaacs depravity, she eventually gave up hope for her brother, realizing his death was inevitable.

Eventually, in the ruins of Dracula's Castle, Hector and Isaac came together for one final confrontation. The battle was fierce, and the two forgemasters seemed evenly matched. Eventually, though, Hector gained the upper hand and turned the tide of the fight against Isaac. On his knees, he laughed as even though he had wanted to use Hector's dying body to play host to Dracula's essence, Isaac realized his own body would do just as well. Death, who had been lurking near by, took the corpse and used it to act as a vessel, pouring the soul of Dracula into it and giving the Dark Lord new life.

Hector plugged onwards, deeper into the castle, in search to the Dark Lord himself. There, in the final keep, the two fought. Dracula was powerful but, in his newly resurrected state, didn't have the power to overcome is former minion. Defeated, Dracula was sent back to his grave, to bide his time until he could find the power to rise once more. Hector, meanwhile, went back to Julia and the two went out into the world with the potential for a relationship to forge between them.

This is the only game to state that Dracula's powers lay over the land even when the Dark Lord isn't around. It's a fair assumption, and does tie in nicely to Simon's Quest where Dracula's minions are still around even though the Dark Lord is dead. Certainly, as the third season of the Castlevania Netflix anime has shown, the monsters exist whether Dracula is around or not (as there are other vampires, among other beasts, independent of Dracula).

As mentioned, Dracula needed a host for his energy, for his soul to possess. This isn't always the case, but often a host is needed when Dracula is dead and isn't expected to rise again for a while (see also Castlevania for the Nintendo 64). Suitable hosts can be anyone, although generally its someone with a touch of dark magics, which is why Hector was an ideal candidate, and also why Isaac worked in a pinch.

As noted, during the course of the game Hector encounters Trevor Belmont. Trevor is adventuring around the countryside, working to rid the land of Dracula's evil. After playing through the game as Hector, Trevor is unlocked for the standard second-quest style play through. It's a fun mode, as Trevor has a different play style than Hector, but this is a very "traditional" second quest mode, with absolutely no plot to tie together the action of Trevor kicking names and taking... well, you know.

Oddly, the whole "Demon Forgemaster" angle was never mentioned before this game, nor have the characters or the class shown up again (in the games series) since. It's one of those weird McGuffins that's mentioned and then ignored... like the Crimson Stone in Lament of Innocence. That said, the devil forgemasters do appear starting in the second season of the anime, so their place in the continuity continues to be confirmed, even if it's only for this era of the series.