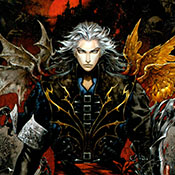 Series one-time producer, IGA, was an unabashed fan of Castlevania III: Dracula's Curse. That was his absolute favorite game, and he loved dropping in nods to that game through his run. That's why Symphony of the Night, which starred Alucard, also featured a boss fight with three evil doppelgangers of his companions from Castlevania III, and why Dawn of Sorrow featured a three-hero bonus mode where the character explore Dracula's castle a la the play style of the NES classic.

That's why it was no suprise when it was eventually announced that Konami planned to release a (semi-)sequel to Castlevania III. Set three years after the events of the NES title, the new game, Castlevania: Curse of Darkness (see, because "Curse" is in both names) the game explored the overworld of Romania and featured at least one character returning from the original game. The main protagonist, however, was someone new, one of Dracula's own warriors who had left the life of evil, retiring to a small town to live peacefully for the rest of his day. Well, until crap happens and of course he goes out to right wrongs and blah blah blah.

Raised from a young age within the walls of Dracula's castle, Hector was a natural Devil Forgemaster, one of Dracula's elite monster creators. Able to create and raise creatures of great evil and grand power, Hector (and other, including his friend Isaac, another foundling among Dracula's ranks) fueled Dracula's limitless armies, creating the minions that walked the halls of the demonic abode. 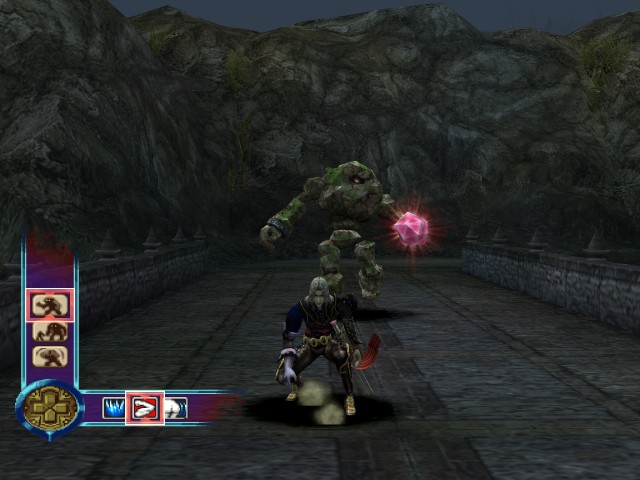 However, despite working for Dracula, Hector was not such a huge fan of the "killing all humans" part of Dracula's evil plans. Evenutally he defected, fleeing to Wallachia, hoping to never have to deal with Dracula's magic again. There, in a church, he met a sister, Rosaly, who tended to his wounds and gave him comfort. Eventually the two fell in love and went off together to find peace and happiness. And for a time they did... until Isaac returned to their lives.

Enraged at Hector's betrayal of his sacred trust with Dracula, Isaac arranged Rosaly's murder (fridging the poor girl before the game even really gets started). Hector, distraught at his love's death, swore vengence and went on the offensive, hunting Isaac first at the ruins of Dracula's castle and then throughout Romania.

On his travels chasing down Isaac, Hector encounters a number of possible allies. There was Zead, a local priest who advises the Devil Foregmaster of Isaac's movements, helping his follow the path of his enemy. St. Germaine, a curious traveler with great knowledge, came to advise Hector along his path, warning him of trusting the enigmatic priest, Zead. And there was Julia, a witch who lent aid to Hector, helping his store and care for the devils he created. He also met, and fought with, Trevor Belmont, the great vampire hunter who was on his own quest to defeat Isaac. Initially distrusting of Hector, Trevor attacked the Devil Foregmaster, thinking him an agent of Dracula.

As Hector crossed through the countryside, he battled friend and foe. It was eventually revealed that Julia was Isaac's sister, and she warned Hector of killing Isaac out of revenge, advising him that doing so would only strengthen Dracula's curse (title drop) upon the land. When the time came, and the two had this last battle, Hector finished off his foe not out of revenge, and not by taking the darkness in himself, but only because there was no other way to end Isaac's own madness.

Still, with Isaac dead, the curse lived on. As was soon revealed, Zead was actually Death in disguise and, using the corpse of Hector's foe, Death had a host for the Dark Lord, Dracula. Hector fought and defeated the Grim Reaper, but this didn't prevent the vampire lord from coming back to life once more. Hector fought and bested the vampire lord, ensuring that Dracula's dark hold on the land would, for a time, finally be lifted.

Released from the dark magic binding him, Hector was free to pursue his own life once more. He met back up with Julia who invited the Devil Foregmaster to live with her. He accepted, finding some kind of peace (and, apparently, moving on pretty quick after the death of Rosaly).

The story recounted above is taken from the events in Curse of Darkness. There was a prequel mange released in Japan (and eventually translated over for U.S. audiences). Although an officially licensed tie-in, the comic's story has a questionable place in the continuity of the series. Although it covers the events of Hector's early life in great detail, we don't use any of that background for this page. Since we aren't sure how official it really is, as far as Konami is concerned, it doesn't fit our needs on this site.

Although a sequel in some respects to Castlevania III, Curse of Darkness is a essential a sequel to the mechanics of Lament of Innocence. Built on the same engine, the game plays remarkable similar to Lament. Of course, improvements were made, such as adding in more exploration and a larger world to explore, but if you didn't like Lament there probably wasn't much in Curse of Darkness to win you over. 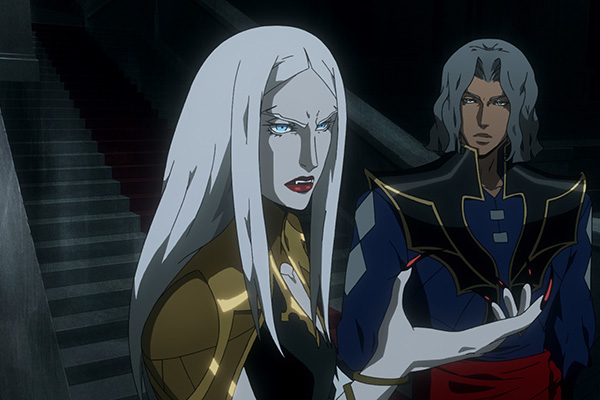 Arriving in season two of the Castlevania anime, Hector is one of Dracula's generals, and one of only two of them that are human. Along with Isaac, Hector serves as a Devil Forgemaster for the Dark Lord (much like his alluded to role in the backstory of Curse of Darkness). Together, the two work to supply Dracula with the forces he'll need to wipe all of humanity off the face of the Earth.

In the series, Hector is a quiet, simple man. Kind at heart, he prefers to work (and play) with animals and he viewed humanity as one more animal to be tended to. He doesn't necessarily want to wipe all of humanity off the planet, but would prefer if they were coralled, like livestock, and cared for. This makes him an easy target for Carmilla, who bends the forgemaster to her will with promises of protection for humanity. False promises, to be sure, but Hector only realizes this too late to be able to do anything about it.

By the end of the second season Hector was captured by Carmilla and, then in third season, he's dragged back to her castle, a prisoner she means to use. She needs an army so she can closer the borders of her lands and make a blood-farm out of the humans living within, but to do so she needs Hector devils. He refuses, but eventually relents after regular visits from Carmilla's younger sister, the pretty and sweet-seeming Lenore. By the end of the season he swears his love and fealty to Lenore but, only too late, realizes once again he was betrayed as Lenore slipped a enslavement ring on his finger, making him an (un)willing slave to her so she could use his Devils. 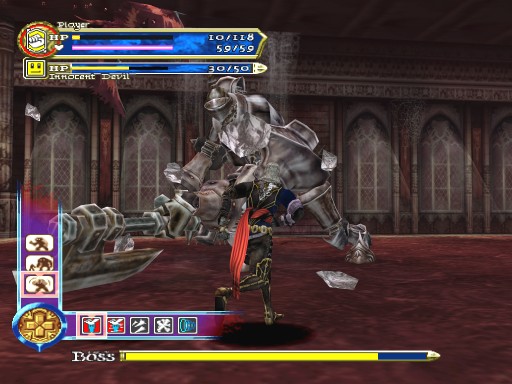 Hector was a pretty strong fighter. Since he wasn't a Belmont, his weapon selection wasn't limited, allowing him to equip all kinds of weapons he could find (essentially letting him function more like Alucard). His great improvement was, of course, the ability to create six different types of Devil to use in battle:

The increased abilities and ability to explore more of his world gave Hector a lot of playability. Mixing up the various Devils and finding the right balance for the various sections of the game gave Curse of Darkness some much-needed depth.